Pritchett’s poignant goodbyes and hopes for the future 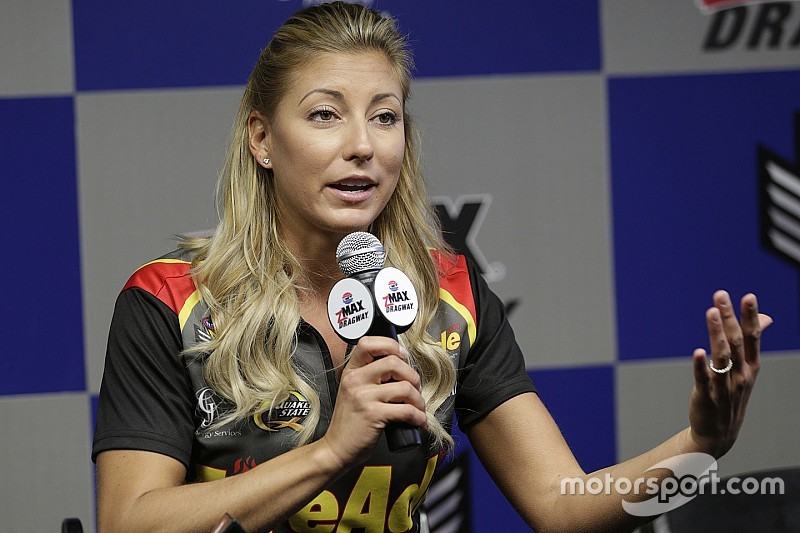 This weekend, Leah Pritchett runs her last race with the ex-Bob Vandergriff crew, but is also set to become a part-time Don Schumacher Racing driver. Just another emotional conflict in a year of them, reports Anne Proffit.

It’s been a rollercoaster year for Leah Pritchett, the Top Fuel driver who won her first NHRA Mello Yello Drag Racing Series race in the second race of the year at Wild Horse Pass Motorsports Park outside Phoenix, Arizona.

Pritchett was racing for Bob Vandergriff Racing (BVR) in what was intended to be her first full-time series ride, with backing from Quaker State and FireAde. She had the services of veteran tuners Mike Guger, who aced his first victory as a T/F crew chief at that race, and Joe Barlam. She had a teammate in Dave Connolly, who’d won many Pro Stock and Lucas Oil sportsman contests but is still looking for his first Top Fuel victory. Her life was looking good.

Then Bob Vandergriff’s good friend Josh Comstock, whose C&J Oil Services company was a big BVR backer, died and the life of the team pretty much went with him. BVR competed at Gainesville and then went to Las Vegas, but after that fourth race of the year, Vandergriff suddenly called it quits and shuttered the team. The loss of Comstock was too much for him to bear and, while he’d been thinking of calling time on his career before then, this incident clinched it.

Vandergriff’s closing of his shop and dismantling his two-car team left Pritchett  and Connolly without rides. It also put Guger, Barlam and Kurt Elliott on the sidelines. Pritchett swiftly brokered an arrangement with Lagana Racing to use their dragster and team to contest the Four-Wide NHRA Nationals at zMax Dragway in Charlotte, North Carolina last weekend and came away with a first round result.

That first win in Phoenix, though, whetted her appetite for more and, for this weekend’s SpringNationals at Royal Purple Raceway outside Houston, Pritchett will be back in a BVR dragster sponsored by Quaker State, run by Guger, Barlam and the balance of her crew as she tries to join Brittany Force as a two-time female winner in Top Fuel this year and elevate herself from current 10th-place points.

“I’m so grateful to have growing relationships with sponsors like Quaker State and FireAde that stand behind us, share common goals and work hard with me to keep [us] in the game,” Pritchett said about her upcoming Houston attack on the balance of the 16-car Top Fuel field. “I’m also beyond stoked to have my crew back together for Houston. There is a unique, seemingly misfit yet professional bond among us that I love.”

She’s focusing strictly on this weekend but there’s more on the horizon. It hasn’t been formally announced yet, but Pritchett will have at least two more opportunities in 2016 to score Wally trophies.

Pritchett and her band of “misfits” now have plans to join the Don Schumacher Racing team headquartered in Brownsburg, Ind. on a part-time basis. Don Schumacher has been expanding his already-large shop and talking about competing with a fourth Top Fuel team to match his four-car Funny Car lineup of Jack Beckman, Ron Capps, Matt Hagan and Tommy Johnson Jr.

Even though the space he intends to allocate for that fourth team isn’t nearly complete, Schumacher is putting a dragster together for Pritchett in at least two contests this year: the Summit Racing Southern Nationals at Atlanta May 13-15 and at the Chevrolet Performance U.S. Nationals over Labor Day weekend, the biggest drag race meeting of the year. Thus Pritchett will join reigning Top Fuel champ Antron Brown, eight-time champ Tony Schumacher and 2013 champ Shawn Langdon.

Financial backing for these two races is coming from FireAde, who aligned with Pritchett for the 2016 season, and Schumacher has already purchased a new technology trailer to aid the cause. While he’s not sure it’s going to happen, Schumacher – who recently returned from cancer treatment – is determined to have a dedicated truck ready for Pritchett and her squad of warriors before the Atlanta contest occurs.

This arrangement is obviously a race-to-race program at this time and neither Pritchett nor her crew are full-time DSR employees right now, but they will run DSR-provided equipment at those two races and, should finances align, at other events, too.

As a result of this episode of musical chairs, Pritchett will become the fourth woman to drive for Don Schumacher Racing, in the wheeltracks of Angelle Sampey, Erica Enders-Stevens and Melanie Troxel.

Right now Pritchett is hoping the weather cooperates in Houston so that she can get the most from herself, her car and the team she adores this weekend.

“I’m figuring it’s the last time with this crew so I intend to be enjoying time with them and enjoying the race, and being in the car. I’m not going to let that get away from me,” she said. “We’re going to lay it down like we know how.”

Then, hopefully with another Wally under her arm, she’ll go back to her adopted home in Brownsburg, Ind., and work with Girls Nite In, a non-profit organization that helps young women who are struggling and who might be underprivileged.

“We talk on topics people have to go through such as issues with school, family, peer pressure, drug abuse, relationships, sexual abuse. We talk about how to cope.”

Leah Pritchett has spent nearly three years working with this group and know it helps her racing career, as well. She’s hands-on at their events, talking with members, being part of the groups, and has served as a role model for many impressionable young women who need help getting their lives in order. After the first four months of 2016, Pritchett has an even wider understanding of facing up to life’s trials and tribulations.