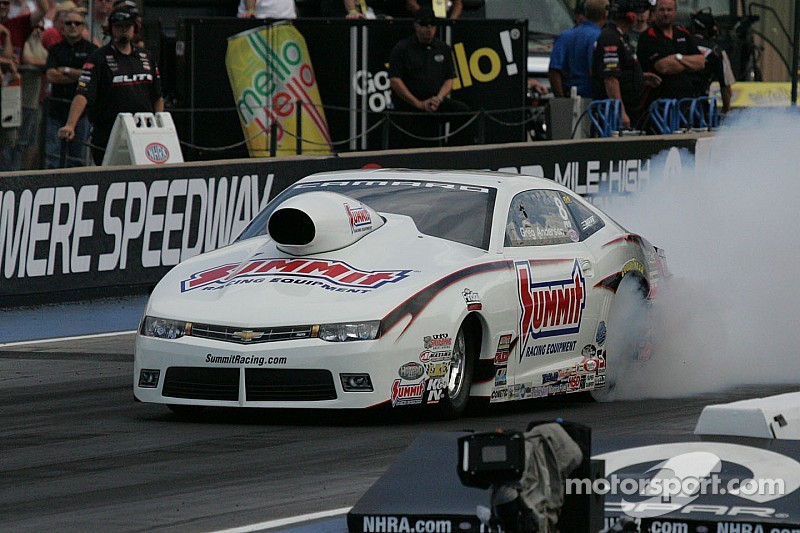 Greg Anderson has made tremendous strides over the past three races on the NHRA Mello Yello Drag Racing Series circuit. But the four-time Pro Stock world champion won’t consider himself all the way back until a victory comes.

Anderson, who jumped into the top 10 for the first time this season with a final-round performance at the most recent event in Seattle, would like for that first victory of the season to come before the Mello Yello Countdown to the Championship begins, which doesn’t leave him much time.

The most ideal situation would be winning at this weekend’s 33rd annual Lucas Oil NHRA Nationals at Brainerd International Raceway, the home track for the longtime Pro Stock star. Not only would it snap a lengthy winless drought that stretches back to 2012, it would give Anderson a boost of confidence that could propel another championship run.

Has a find a way to win

“I have to go find a way to win,” Anderson said. “I feel like I’ve got a car that can win, but I need to prove I can win again before the Countdown. I want to win again to prove to myself that I can do it. We’ve had a lot of success here recently, but hopefully I can get a win soon.”

Spencer Massey (Top Fuel), Ron Capps (Funny Car) and Mike Edwards (Pro Stock) were last year’s winners of the event that will once again be televised nationally on ESPN2. It is the 17th of 24 races during the 2014 season and is the penultimate stop in the regular season.

Anderson, who missed the first five races of the season recovering from heart surgery, realizes the immediacy of the event and that is apparent by his recent turnaround. Anderson and his Summit Racing Equipment Chevy Camaro posted round wins at each of the three stops on the NHRA Western Swing, losing to teammate Jason Line in the final round at Seattle.

It moved Anderson into the top 10 and he now leads rookie Jonathan Gray by 26 points for the final spot in the Countdown to the Championship. But Anderson hopes that recent string is the start of something even bigger heading into the most important stretch of the season.

“We’ve definitely come a long way in the last month,” Anderson said. “We’ve made some serious gains and I can’t ask for more. We’re getting our act together at the right time and I think we’re now able to run with anybody in the class and compete for a championship. It’s been a stressful summer, but everything is starting to come together the way we want.”

Running well in the high-altitude conditions of Denver and then transitioning smoothly to the quicker tracks in Sonoma and Seattle was also key for Anderson. He believes the team has found a winning combination that can be consistent throughout a weekend, proving that by qualifying in the top five at all three events after not qualifying in the top seven at any previous race.

“The last three races have proven to us that what we’ve done works in all types of conditions,” Anderson said. “It’s very repeatable and that’s very reassuring. Everything has gradually improved and it’s starting to show. I definitely feel like we’ve gotten a lot better.”

But Anderson seemingly always feels great at his home track in Brainerd, winning three times previously. A fourth would do wonders for his entire team and feeling comfortable at the track has always played a part in Anderson’s strong success there.

“I’ve been racing up here a lot of years but it’s always fun,” Anderson said. “It’s just one of those where you have a lot of fun and you look forward to it every year. It’s a fun racetrack with great fans and I always recommend that everyone should go there at least once.”

In Funny Car, Capps took home the victory in Brainerd, marking his fourth win at the track. But no one owns Brainerd like 16-time and reigning world champion John Force, who has 11 wins at the facility. Both will be challenged from an ultra-competitive Funny Car class that also features Tommy Johnson Jr., points leader Robert Hight, 1992 Brainerd winner Cruz Pedregon, Matt Hagan, two-time season winner Courtney Force, Tim Wilkerson, Del Worsham and Alexis DeJoria, also a two-time winner this season.