We've been looking for the right person to head up R&D...

DULUTH, Ga. (April 25) -- One of the most respected and well-liked people in drag racing, John Medlen, has joined R2B2 Racing as vice president of research and development. Team owner Roger Burgess says Medlen will work in a variety of capacities within his organization, which currently fields a Funny Car and five Pro Mod cars.

"We've been looking for the right person to head up R&D and the dream scenario was to find someone who could fabricate parts, modify our existing stuff, feel at home in our new chassis shop, run the CNC machines and other equipment, and help tune all of these racecars," Burgess said. "We found all that in John Medlen.

"We're extremely pleased to have John on board. I truly haven't been this excited about racing, particularly nitro racing, since I got started in the class. We're in this for the long haul and it's going to be a wonderful journey with John on board."

Medlen spent the better part of the last two decades with John Force Racing and was crew chief of Tony Pedregon's Funny Car when they won the NHRA world title in 2003. Most recently a member of Don Schumacher Racing, Medlen has won multiple times in both Top Fuel and Funny Car, including six wins with his late son Eric. He also headed The Eric Medlen Project at John Force Racing to improve drag racing safety. 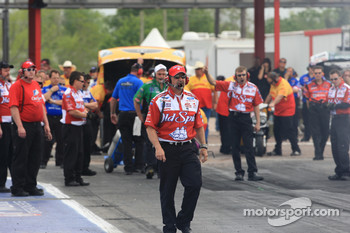 "Roger and I have generated a nice friendship over the last several months and when he asked me to come over I decided to make the move," Medlen said. "I enjoy working on things when you start at the foundation level. Building a solid foundation, I think, is what ultimately determines your level of success. It's how we did things at John Force Racing for 15 years and that turned out pretty good over there. I'm very excited to be here."

Medlen already has joined the team and will be on hand at this weekend's 24th annual O'Reilly Auto Parts NHRA Spring Nationals at Royal Purple Raceway in Houston to consult with Aaron Brooks, the crew chief of Melanie Troxel's In-N-Out Burger Toyota Solara.

"We've been struggling with the Funny Car so we're hoping John can offer some help to get Aaron through this rough spot," Burgess said. "There's great chemistry on this team and I know the guys are going to continue to work hard. Their reward will be coming very soon."

Added Medlen, "Sometimes when you're removed from a situation and then come on with fresh eyes you can see things a little differently than someone who is hard at it every day. I met with Aaron and he's an open-minded young man with a winning attitude and that's very encouraging. He'll get this car figured out real soon; I'm sure of it."

I enjoy working on things when you start at the foundation level.

Troxel has missed the cut at the first four Funny Car races of the year but feels the team is close to figuring out her hot rod, a process that will be accelerated with Medlen on the team.

"I think very highly of John and it's great to have him at R2B2 Racing," she said. "He'll be under the hood of all our Pro Mod cars also so everyone is pumped up about that. He's a guy that everyone likes and respects and his experience is a real asset.

"We're going to keep him busy. Once we get these short-term issues resolved, he'll be involved in all facets of the race team, from helping on the production line at R2B2 Racecars, to running the clutch and blower dynos, to fine-tuning the cylinder heads we use - he'll be very busy."

Troxel will race both her Funny Car and her Pro Mod racer this weekend. Burgess also will take to the track in his turbo-powered Pro Mod machine, along with teammates Brad Personett and Ray Commisso.

How would F1 manage a Sochi qualifying washout?

How would F1 manage a Sochi qualifying washout?