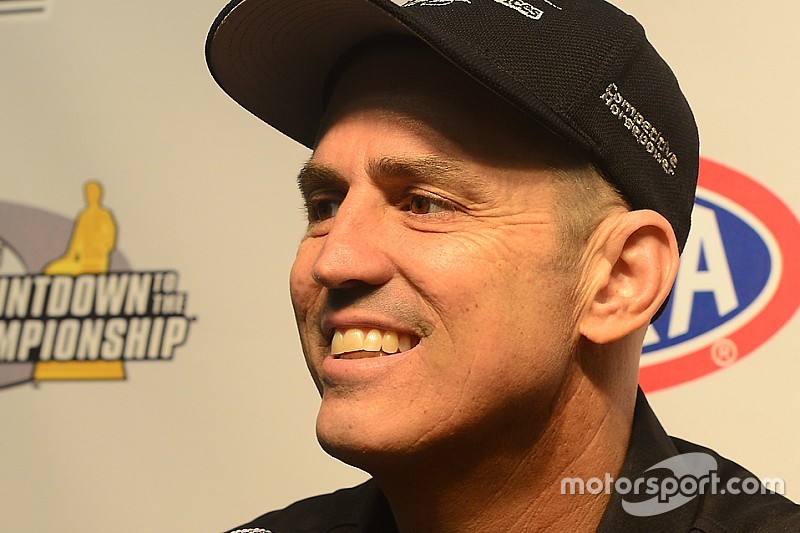 Larry Dixon has imminent plans for his own team, but first the three-time NHRA Top Fuel champion is getting his taste for 10,000hp at Maple Grove this weekend with his old friends from Down Under. By Anne Proffit.

It’s not hard to remember times when NHRA Mello Yello Drag Racing Series fields were over-subscribed with racers vying to make the fields of 16 that race in Sunday eliminations. Go or go home was the mantra.

The financial demands of big-time drag racing have taken their toll on fields in the past few years and some drivers and teams have, due to financial hardship, departed the sport, no longer able to function at the highest standards.

That wasn’t the case for three-time NHRA Top Fuel champion Larry Dixon. True, he lost his ride with Bob Vandergriff Racing (BVR) at the end of the 2015 season when Leah Pritchett brought sponsorship to the team, but at the time Dixon had been dealing with an even bigger battle than one with a 10,000-horsepower-plus dragster. He was recovering from throat cancer; Dixon needed to beat that devil to the winner’s beam.

After whipping throat cancer with radiation and chemotherapy over the 2014 off-season (he called it his “winter project”), Dixon did “post-chemotherapy camp” at Gainesville, the third race of the year when his BVR dragster went vertical after the hit, yet thankfully came down on its Goodyear tires. Dixon sustained two fractured vertebrae to go with his depleted strength from the rigors of fighting cancer. He prevailed and had an excellent full season of racing, culminating in a fourth place in the championship for the second-winningest driver in Top Fuel, after Tony Schumacher.

Now Dixon is preparing to launch his own team.

“I’ve got a shop in Brownsburg, a couple of racecars, a hauler, all the safety equipment and engines,” Dixon told Motorsport.com. “We’re ready to go but we’ve got no operating capital to go to races. The only thing we’re missing is a marketing partner to put on the side of the car, but we’re cautiously optimistic about aiming to be at the Winternationals – in a driving suit.”

Spending all this time working to secure his future hasn’t given Larry Dixon much time in a racecar. But he’s still gone to Australia with Rapisarda Autosport International where, in a single race, he earned the No. 1 qualifying spot, won the event and set the speed record in that country to go with the E.T. record he already owned.

Rapisarda and Dixon have got a history together outside of Australia too. After being jettisoned from Al-Anabi Racing, Dixon spent 2013 doing about a dozen races with Santo, Santo Jr and Santino Rapisarda’s outfit. They worked well together then and when Wayne Newby, who had been driving the car, was needed back at home, the Rapisarda family called up Dixon for this coming weekend’s 32nd Dodge NHRA Nationals at Maple Grove Raceway outside Reading, PA.

Inevitably it’s been tough for Dixon to sit on the sidelines and so he jumped at the chance. Given that Rapisarda ran Newby at Indy, Charlotte and St. Louis, who’s to say whether they’ll continue on through the entire six-race Countdown to the Championship? But their entry this week brings the Top Fuel entry list to a robust 19 dragsters, and that’s exciting for drag racing fans - and for Larry Dixon, who just wants to get back in the saddle again.

“Rapisarda ran Charlotte and went to the semifinals; they ran St Louis and were out after the first round,” Dixon states. “I drove this car in 2013 and I”m very familiar with it. I was refitted for it on Monday and everything feels good, like a familiar pair of shoes.

“Don Schumacher Racing did both the front- and back-half of the car and it’s totally up to date. As you know, there’s not a whole lot you can do with the rules currently in place. You run what the rules say you can do.”

Despite this being, potentially, a one-off ride, Dixon knows he’s got as good an opportunity as any of the 18 other drivers on the premises at Maple Grove.

“Any time you pull into the gate you’ve got a chance to win. It’s like a staircase, where you take one step at a time. Even though this is a one-off deal, I’d sure like to do the business this weekend. I’ll just try to do the best I can and see where the chips fall.”

With Santo Jr and Santino, the 22-year-old sons of Santo Rapisarda, handling the tuning duties as they have for the past five years, three-time NHRA Top Fuel champ Larry Dixon is ready for action on the always-quick and always-fast Maple Grove dragstrip.

“I still get wound up going to the track but once I’m strapped into the car, it feels like home. It’s where I’m supposed to be.”