Brogdon at Bristol, a year of change

When the NHRA Full Throttle tour runs this weekend in Bristol, Tennessee, it will mark the one year anniversary of The EDGE Pain & Performance Chips team in its current configuration. The 2010 version of the Thunder Valley Nationals saw the debut of Tim Freeman when he joined the team in Bristol for the first time. 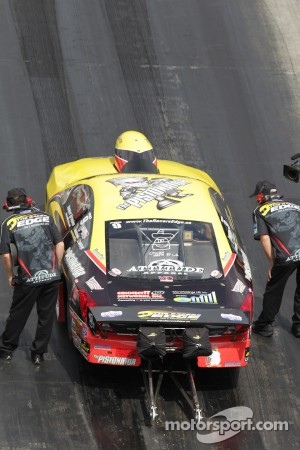 After numerous changes and many laps down the quarter mile Rodger Brogdon and team have seen a marked change in their performance level and all the work the team has done is paying off. In the 20 races that have taken place since last year’s Bristol event, the team has effectively experienced a night and day change in their race day performance, a change that hasn’t gone unnoticed by the rest of the Pro Stock contingent.

“When Timmy came on board last year we knew we had a car that was capable of going rounds on race day, we just didn’t have the right set-up in the car,” explained Brogdon. “We had flashes of brilliance prior to Bristol, but we didn’t have any consistency. It’s taken awhile, but we have now taken our program to a level that has consistency, and we can build on and grow from there. Pro Stock, more than any other class, demands that every time you go down track you must be able to put forth a 100% effort, and that was something we were missing.”

“Since last year’s race, we’ve effectively experienced 2 seasons of racing. There have been 20 races since we were last in Thunder Valley. In the first 10 we were effectively starting all over again, and we struggled to a #12 average qualifying spot and went 3-10 in eliminations. Once we started getting back in the groove, we were able to step up our performance level and in the last 10 races we’ve improved our average qualifying position by 7 spots and have had a winning record, along with our first #1 effort and the national record.”

“Right now I think we have has competitive a team as anyone else on the tour,” Rodger added, “and the only thing we haven’t done yet is win a race. We’re sitting 6th in the points chase (130 out of first) going into Bristol and locked into the K&N Horsepower Challenge next week in Norwalk. Last year at this time we were campaigning hard for the “vote in” spot for the Challenge because we hadn’t earned a berth, we were 8th in points and were only 807 points out of first place.”

Overall the 2011 season has been a positive effort for Rodger Brogdon and the RACERS EDGE team and the rest of the year looks to be just as promising. With Steve Kent in the PISTONATOR team car now on track everyone realizes that the effort has increased, but that the overall goal continues to get closer.