KENT, Wash. — The battle between rookie Funny Car drivers Alexis DeJoria and Courtney Force is heating up as the NHRA Full Throttle Drag Racing Series heads to the Northwest for the 25th annual O’Reilly Auto Parts NHRA Northwest Nationals presented by Super Start Batteries at Pacific Raceways near Seattle, the third and final stop of the grueling Western Swing. 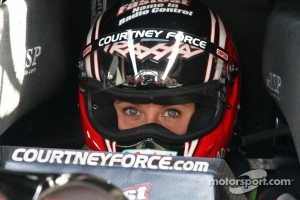 In addition to bragging rights in the pits, both are leading candidates for the prestigious Auto Club Road to the Future Award, presented each season to the top rookie driver at the season-ending awards ceremony.

Both drivers have experienced some growing pains throughout their rookie campaign, however each have had plenty of moments to shine as well.

Force has reached two final rounds behind the wheel of her Traxxas Ford Mustang this season, but has also learned how difficult the 7,000-horspeower nitro-burning machines can be to drive when she brushed the wall at high-speed early in the season.

DeJoria has also reached a final round, in Bristol, Tenn., but the Tequila Patron Toyota Camry team has learned what it’s like to be on the sidelines Sunday morning after posting DNQs at races in Denver and Norwalk, Ohio.

Following Sonoma, Force is seventh in the points standings and has qualified for each of the 14 races.

“There have definitely been some ups and downs during my rookie season in Funny Car,” Force said. “I have learned a lot so far this season, and will continue learning each time I'm in the seat and every pass down the racetrack I am learning something new. Overall, I'm very excited with how this season is going.”

DeJoria is 13th overall in the series standings and will need to make a move at the next three events if she is going to join Force in the top 10 and qualify for the Countdown to the Championship. However, no matter the outcome, she’s pleased with how her team, which is led by former driver Del Worsham, has performed this season. 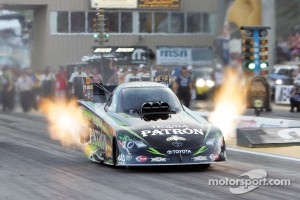 “If I had to grade my personal performance, I’d give myself a seven out of 10,” DeJoria said. “I think I’ve overcome a lot and I’ve done pretty well this season. I always strive to do better and am constantly pushing myself to do better.”

As the tour heads to Seattle, both drivers are looking forward to returning to the track where they each earned their first Wally trophies in the Lucas Oil Drag Racing Series. DeJoria won in Top Alcohol Funny Car at the event last season and Force claimed a Top Alcohol Dragster victory at the scenic facility in 2009.

“I'm so excited to be back in Seattle being that I earned my first ever national event Wally at this race track when I was competing in Top Alcohol Dragster,” Force said. “I'm really hoping this is my lucky track and I'll be able to do just as well in the Funny Car class this weekend.”

Said DeJoria: “It’s very exciting to go back to the place where I won last season in Top Alcohol Funny Car. You can’t help but feel confident going back to a place where you’ve had such great success.”

They are two of the most high-profile rookies to enter NHRA Full Throttle Drag Racing Series competition in many seasons, so ultimately there is quite a bit of pressure for both drivers to not only perform on the track, but also off the track as ambassadors for the sport of NHRA Drag Racing and their respective sponsors.

“Taking on the role of an ambassador and role model is something that I value very much,” said DeJoria, daughter of famed entrepreneur John Paul DeJoria. “I’m very passionate about what I do, which makes it very easy for me to talk so openly about it. I have a daughter myself so it’s important for me and if I can be a positive role model to not only my daughter, but any other young girl seeking someone to look up to, I feel as if I’ve done my job.”

The 24-year-old Force is the daughter of 15-time NHRA Funny Car world champ John Force. Racing has been a part of her life for as long as she can remember.

“I love what I do for a living,” Force said. “It has always been a dream of mine to race professionally in the NHRA so it is an amazing feeling to also have the opportunity to fulfill the duty of representing my favorite sport, the NHRA. As far as being a role model, I just hope I can be represented as a symbol of what young girls are capable of doing when they grow up, and that if they stick to their dream, they can make it happen with enough motivation, drive, and a positive attitude.”

As much as DeJoria and Force hope to earn their first career Funny Car victories at Pacific Raceways, there are many other drivers in the category who will be battling them for the title. That includes three-time defending event Funny Car winner Tim Wilkerson, who is fighting for a spot in the top 10.

Reigning Funny Car world champ Matt Hagan is coming off his first final round of the season and hoping to build upon that success in Seattle with hopes of passing Wilkerson in 11th and John Force in 10th, so he can earn a playoff berth.

In Top Fuel, Don Schumacher Racing has dominated all season long with Antron Brown and Spencer Massey tied atop to the point standings and Tony Schumacher is in third right behind his teammates. The battle is brewing between Clay Millican and Bob Vandergriff for the 10th and final spot in the Countdown. Millican is four points out of 10th with just three races left until the Countdown begins.

Allen Johnson and his Mopar Dodge Avenger took over the points lead in Denver and extended it with a win over Greg Anderson at the most recent NHRA event in Sonoma, Calif. The battle at the top is tight, but so is the battle for the 9th and 10th spots, between Ron Krisher, Jeg Coughlin, V. Gaines and Larry Morgan. With only three races left before the Countdown to the Championship, the battle for the final top 10 spots in all of the classes kicks into high gear starting at Seattle.