ENNIS, Texas – The next NHRA Full Throttle Drag Racing Series victory for U.S. Army Top Fuel Dragster driver Tony Schumacher will be the milestone 70th of his illustrious career. This weekend, the seven-time world champion and current Top Fuel points leader ventures back to the place where he scored his very first win – the Texas Motorplex just south of Dallas – for the second event of the 2012 Countdown to the Championship, the Texas NHRA Fall Nationals. 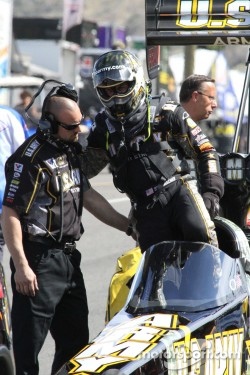 Considering that Schumacher’s longtime sponsor, the U.S. Army, is the Nation’s preeminent leadership experience, where the Nation’s future leaders are developed and where they are empowered with the confidence to take decisive action when needed and the flexibility to excel in constantly evolving situations, sitting in the leadership position at or near the top of the point standings at this time of year has been a common occurrence for the U.S. Army Top Fuel team.

For seven seasons, including the one in 1999 when Schumacher beat Scott Kalitta in a dramatic Top Fuel final at the Texas Motorplex to record his first career victory, the U.S. Army team achieved success in its mission of bringing home a world championship.

And as it heads back this weekend to where its race- and championship-winning ways began 13 years ago, the team is focused like never before on completing another successful mission in the form of championship number eight.

Schumacher kicked off this year’s Countdown to the Championship in Army Strong fashion last weekend with a final-round appearance at the O’Reilly Auto Parts NHRA Nationals at zMAX Dragway in Concord, N.C.

It was the fifth time he’s reached the final in 18 events this season and, despite coming up just short of his third victory of the season, Schumacher may have lost the opening battle but he left the outskirts of Charlotte winning the war, having vaulted from third place to first in the standings.

Meanwhile, for fellow U.S. Army driver and Don Schumacher Racing teammate Antron Brown, who entered the Countdown with a 30-point lead in the championship, a mechanical failure led to an abrupt exit in the opening round of eliminations at Charlotte and dropped Brown from first to fourth place in the standings, 28 points behind Schumacher.

It was a disappointing blow to the championship hopes of Brown & Company, but certainly no cause for alarm with still five events to go in the Countdown. After all, this is a team that has been a model of consistency all season, tying for the series lead in wins with four – three of which occurred over a four-race stretch – and a team that totaled eight final-round appearances in the 17 regular-season events.

As Schumacher and Brown head to the outskirts of Dallas, both know first-hand their championship standing can change quicker than a Texas two-step. But knowing only the strongest wear the U.S. Army colors they wear, and the Soldiers they represent possess a mental, emotional and physical strength like no other, both are well-equipped to move a step closer toward the championship this weekend.

You’re heading to the Texas Motorplex with the points lead after week one of the Countdown. What is your outlook heading into Dallas this weekend, a place where you first won in 1999, then again in 2004, 2005, 2009 and 2010? "We’re all bunched up right now because we’re still just one race into the Countdown. Obviously, it’s as important to be in the lead as it’s ever been because it’s Countdown time.

And there is absolutely no better place to proudly display the colors of the 1 million Army Strong Soldiers we represent than at the top of the standings. Dallas has been a great race for me. It’s where I won my first race 69 wins ago. I’ve won a lot of important races there when we’ve had to over the years and I look forward to doing it again.

We’ve always run well there and we’ve had success there. It’s the place where I got my first win, so it’s got a lot of meaning for me. We’ve had some other great moments there, too, that led to championships. You know, that’s the mark of this team, performing at its best under pressure.

We’ve always been best at the end when we’ve had to be. It’s very consistent with the way our Soldiers are at their best when it matters most, exhibiting the mental, emotional and physical strength like no other and focusing on completing the mission. I really love the position we’re in right now, but there is still a lot of racing left so we need to maintain our focus on the big prize.”

Talk for a bit about how special it was to score you first career Top Fuel win at this event. “It was my first win ever, so that says it all. I was in the points lead at the time and I was an unheard-of nobody at the time. We beat Scott Kalitta and we did it at a time when we hadn’t won yet.

We had the points lead, already, and there was no Countdown. We went out and won it, which is a very special thing when you do it for the first time. We won that weekend and went on to keep the lead all the way to the end, and the rest is history.”

You’ve got to be feeling confident about the way the U.S. Army team has been performing of late, winning the U.S. Nationals, then reaching the final in the Countdown opener at Charlotte last weekend. “We’re definitely clicking as a team right now. It seems we’ve always been good under pressure.

We’re always the best at the end of the season, when it matters the most. Once again, we are in the best position you can be in right now, and we’re tough to beat when we get into this position and the car is running right. I’m really looking forward to this weekend in Dallas. But there are a lot of great teams with their sights set on the very same goals we have our sights set on.

So it’s a matter of staying the course and keeping up the pace we’ve set for ourselves here in the closing stretch. We may have come up just short in trying to win the battle last weekend, but we are winning the war right now and that is what matters the most.”

You got off to a rather inauspicious start to the Countdown at Charlotte last weekend because of a mechanical issue. Have you figured out what happened, and what is the mood of the team as you head to Dallas for round two of the Countdown? “We have regrouped and are ready to go into Dallas with a full head of steam. We’ll just keep on pressing, as always. Our eyes have never lost focus on our ultimate mission, and that is to win the championship.

But it was out of our control, there was nothing we could’ve done. The car was on a great run. We broke an input shaft like that earlier in the year, but it had something like 25 runs on it. That one at Charlotte had maybe 12 runs and it just got done being checked. It was just one of those deals that happens.

I don’t know why, but we’ve investigated it and are making sure it won’t happen again, at all, period – especially here in the Countdown. You have to understand that the level of engineering and teamwork on display at the racetrack in this highly competitive series is reflective of the leading-edge power, speed, technology and teamwork exhibited by the U.S. Army Soldiers we represent.

We push our equipment to its absolute limits each and every run as we try to get maximum speed and performance out of our racecars. And the high level of execution behind our leading-edge technology reflects the powerful, realistic training of our Army Strong Soldiers. Bottom line, we’re ready to go this weekend and our eyes are focused firmly on succeeding in our mission – to win the championship.”

What are your thoughts, in particular, about getting back at it at the Texas Motorplex this weekend? “I’m always excited to go to Dallas. The weather looks like it’s going to be right there. We’re just anxious to get back out there racing again after what happened last week in Charlotte.

That’s the cool part – that we have three more weekends in a row, and then two more races after that to close the season, so we’re looking forward to getting back out there and getting back after it.”

Does your approach change now that you’ve fallen 28 points behind the championship lead with five races left in the Countdown? “No. We’re going to go in there and take it one qualifying run at a time, hit the best run we can each time, get all the qualifying points we can get.

Then we’re going to attack it on race day and take it a round at a time. That’s been our strategy all year long. It’s been working pretty well. If you think about winning a whole race, you’re not thinking about the little things you need to do for each round to make that happen. We’re going to focus on the small things and hopefully everything else will take care of itself.”