The first-round in Gainesville was a virtual repeat of the Phoenix event just two weeks ago...

With some of the best 60-foot times in the category, the dedicated crew continued to unearth incremental improvements as they work towards a set-up that will garner top-half qualifying, round wins, and event victories. 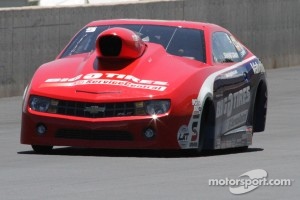 "The early numbers are good, and we have the power," said Gray, the No. 10 qualifier at the event. "We knew coming into Gainesville that we had the opportunity for some really good conditions for Pro Stock, and sure enough, they showed up on Friday for us.

We'll keep picking away at it, and we'll get ourselves qualified higher; that's our goal, because if you don't qualify in the top half, it's real, real hard to get out of the first round."

The first-round in Gainesville was a virtual repeat of the Phoenix event just two weeks ago. Once again, Gray drew Erica Enders-Stevens as his opponent for the opening act of eliminations on Sunday. This time, Gray's run was plagued with tire-shake and he had to shut off.

"We shook the tires a few times this weekend, and looking at the data we can see where we need to improve," said Gray, currently tied for 10th in the Mello Yello Series standings.

"So we'll go out and test some more, test as much as we can before the race in Las Vegas in two weeks. We've got our work cut out for us, but we'll be fine. It's only a matter of time."