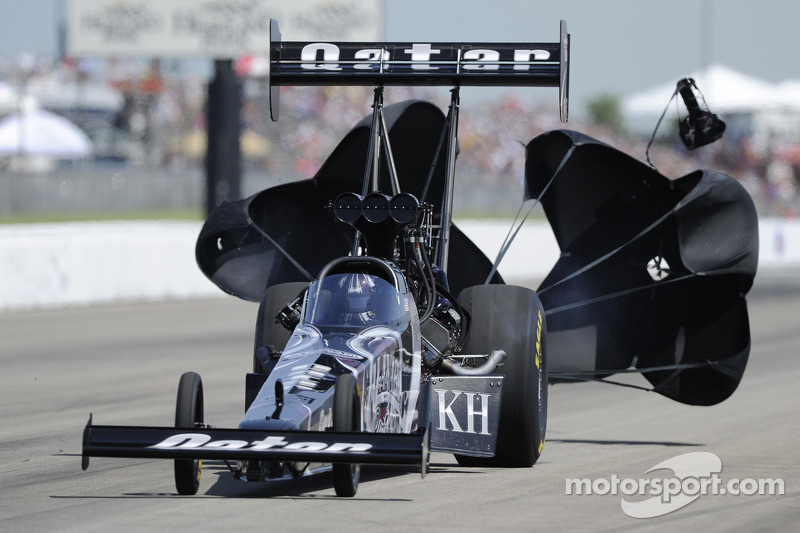 Langdon, a Southern California native, earned the title in front of a large contingent of family and friends at Auto Club Raceway at Pomona by qualifying second in the 16-car Top Fuel field. His closest challenger, defending series champ Antron Brown, qualified fifth overall, giving Langdon an insurmountable 104 point lead with only a maximum of 100 points available on Sunday. 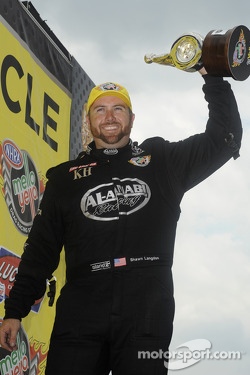 “You want to clinch the title as soon as you can,” Langdon said. “There’s a lot of pressure. I’ve been in some pressure situations before in racing, but nothing like this. It’s just the overall pressure of the Countdown. It’s been a great journey, but this is all a learning experience for me.”

Langdon’s second-best qualifying effort of 3.750 at 327.03 puts him in position to add to his category-best six season victories when he faces Steve Torrence in the opening round of eliminations. The former NHRA Jr. Drag Racing League champion and two-time Super Comp champ in the NHRA Lucas Oil Drag Racing Series now joins an elite group of drivers who are NHRA Mello Yello Series Top Fuel world champions.

“When I think of an NHRA Top Fuel champion I think of Joe Amato, Kenny Bernstein, and Tony Schumacher,” Langdon said. “To be mentioned in that group now is just unbelievable. When I think of myself I am still that young kid on the opposite side of the fence dreaming of one day getting the chance to do it. I hope to have the opportunity to do this again.”

Defending event winner Bernstein stole the top position away from Langdon on the final qualifying run with a performance of 3.748 seconds at 325.37 mph in his ProtectTheHarvest.com dragster.

“The car totally hooked up, it felt great,” said Bernstein of his first No. 1 of the season and 15th of his career. “When those runs are like that you know it is a good run. When the finish line came to us quickly I knew it was a great run. It’s one of those tracks, when you come to Pomona it just feels right. It has a good vibe for me and I feel like we can do well here at the Finals. We are focused on winning the race, the guys feel good and we can just go after it.”

In Funny Car, recently crowned Funny Car champ Force raced to a track record time of 3.995 at 319.37 in his Castrol GTX Ford Mustang to earn his sixth No. 1 of the season and 146th of his career. The 16-time champ’s time was the first three-second run for a Funny Car at the historic dragstrip. Matt Hagan qualified second overall in a Dodge Charger with a 4.014 at a track record speed of 320.20.

“It’s a rocket,” Force said. “It goes down through there. It doesn’t vibrate. It doesn’t move around. It’s on a mission, and that thing did it, and I knew it. I heard [my crew] yelling on the radio, but they didn’t tell me what it was because they tried to save the excitement for the camera, but I knew she ran in the threes; I just didn’t know how good. The Schumachers, they beat us to the threes, but at least we got it here at my home track, Pomona, in front of a pretty good crowd here, so I’m excited.”

Edwards claimed his 15th No. 1 of the season and 56th of his career in Pro Stock, with a performance of 6.530 at 212.23 in his Interstate Batteries/I Am Second Chevy Camaro. By claiming the maximum number of qualifying points, Edwards moved into a tie for second in the championship battle with Jason Line. They trail series leader Jeg Coughlin by 70 points.

“We came in this weekend feeling like we needed to be perfect and the car ran very good,” Edwards said. “To get No. 1 in all four sessions was just a tremendous job by this team. I’m so proud of everybody. We just have three guys with us now, and it feels like I’ve been working in a Top Fuel pit.”

There are several scenarios on the table, but to clinch the championship no matter what his challengers do, Coughlin needs to advance to the semifinals.

“Tomorrow will be interesting, to say the least,” Edwards said. “I don't think there's a national record out there, so we'll need some help. It’s been a tough season the last six races, but if you look at the whole year, it’s still been a great season. We have one more day left in 2013, and I hope that we can make the most of it.”

In Pro Stock Motorcycle, Arana Jr. earned his third No. 1 of the season and 13th of his career with a 6.818 at 195.31 on his Lucas Oil Buell. He will race Jim Underdahl in the first round. With the bike championship already awarded to Matt Smith, Arana is focused on moving up as far as he can in the series standings with a strong run tomorrow.

“We started off great in 2013 and plan to end the season the same way,” Arana Jr. said. “We were not able to accomplish our main goal, which was to win the championship, but we're going to do our best to end the season with a win. We had a couple of problems that happened to us this year; engines break when you push them to the limit. Things break, and sometimes it takes a while to get back to par. The biggest thing we learned is that we need more help, but it’s been a great year for us as a team. We put all three of our bikes in the top 10, and I have four wins so far.”

Force No. 1 at Auto Club finals