Strong qualifying effort and career numbers for Mopar at Gatornationals

Gainesville, Fla. (Saturday, March 16) – It’s been a solid start to the 2013 NHRA Mello Yello Drag Racing season for Mopar who is looking strong after posting career numbers in qualifying at the 44th Annual Gatornationals in Gainesville, Fla. to follow-up on two title wins in the first two events of the year.

Good clean air helped the Pro Stock class put up some record numbers at the season’s traditional east coast opening event, but it proved difficult to dislodge no.1 qualifier Mike Edwards from the top spot after he set national record time of 6.473-seconds and a track record speed 214.31 mph in the first qualifying session of the weekend. 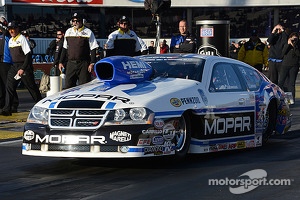 Defending Pro Stock World Champ Allen Johnson qualified second in his Team Mopar Dodge Avenger, posting the quickest elapsed time of his 17 year career with a 6.481-second pass in the first session on Friday. He then improved his fastest career pass for a second time this weekend with a 213.70 mph top speed, setting the fifth fastest pass in the history of Pro Stock. Johnson was no.1 qualifier last year at Gainesville where he set the previous mark for his career-best E.T.

“It’s good, but we can do better,” said Johnson even after posting the fastest passes of his career. “It’s our best start of the season thus far, but we always want to be No. 1 in our Mopar Dodge Avenger. We gained a few bonus qualifying points, maybe four or five, and that’s always important. All three of the Johnson & Johnson Racing team cars made solid runs with a good chance to win it all, and that’s what we want to do every Sunday.”

“The Gatornationals is one of the most prestigious events on our schedule, and every driver wants to take home the trophy from this race,” added Johnson whose best finish at this national event was runner-up in 2009. “It would be huge to get a win tomorrow, not only to check it off my career to-do list but also to gain some early momentum as we work to defend our Pro Stock title.”

"It would be nice to get another win here," said Coughlin who has two Pro Stock title wins in Gainesville (2001, 2008) and finished runner-up three times (2002, 2003, 2004). "It's what every team yearns for and I know the guys in this pit have earned it. We'll get up on the wheel tomorrow, take them one at a time, try to limit our mistakes and we'll see how it turns out. Hopefully one of our three Dodges ends up in the winner's circle."

The third member of the J&J HEMI®-powered team and title winner at the season opening event in Pomona, Vincent Nobile, qualified eighth with a 6.513 sec / 212.86 mph effort. Fellow Dodge Avenger entry Vieri Gaines was sixth with a pass of 6.504 sec (213.47 mph).

With the addition of qualifying bonus points, Nobile still leads the Pro Stock Standings with 204 points, while Coughlin (187 points) is fourth, Gaines (178 points) is fifth and Johnson (151) is in seventh place.

“To have partners like Magneti Marelli step up and run multiple races as primary sponsor with us and just be a part of DSR is huge,” said Hagan, who is hoping to take his Mopar to his first final elimination round at the Gatornationals. “I think it speaks volumes for DSR and the program that we’re putting together. We just have a great program and I think we can continue to show success and keep Magneti Marelli, Mopar and Rocky Boots up front.”

“Just to be able to carry the banner for that brand is phenomenal,” added Hagan. “Mopar is one of the top brands out here and my fan base has grown just from being associated with Mopar. The brand speaks for itself and hopefully we can represent it well enough to put it and their partners Magneti Marelli in the Winner’s Circle.”

Coming off a title win at the previous NHRA event in Phoenix, DSR teammate Ron Capps earned a sixth place seeding with a 4.115-second, 304.94 mph best qualifying run. Mopar’s 2012 World Champion Jeff Beckman is eleventh on the scoring sheets with an E.T. of 4.122-sec (302.55 mph).

In addition to the sponsorship announcement this week by Mopar and its Magneti Marelli partnership on the DSR entry, the brand also enhanced its continued support of Sportsman racing within the NHRA with the establishment of the ‘Tom Hoover Sportsman Challenge’ beginning this season, along with enhancements to its contingency program. The winner of Mopar’s Tom Hoover Sportsman Challenge will be determined by selecting the Sportsman Class racer that amasses the most points earned in a season during NHRA sanctioned races at the wheel of a Chrysler Group vehicle, competing in either Stock or Super Stock classes nationwide. A special commemorative Mopar trophy will be presented to the winner along with a $4,260 purse, as a nod to the 426 race HEMI® which celebrates the 50th anniversary of its introduction next year.

Television coverage of the Gatornationals will be broadcast on ESPN2 and ESPN2HD with 90 minutes of qualifying highlights airing Sunday, March 17, at 1:30 a.m. (ET) then later in the day, three hours of final eliminations action starting at 7 p.m. (ET).

Gray quick in qualifying to start second at Gatornationals