Tasca heads to Nationals in Las Vegas 5th in points

Bob Tasca heads to the NHRA Nationals in Las Vegas fifth in the Funny Car points standings but looking for his first win of the season. 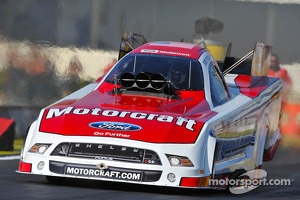 After qualifying No. 2 at the NHRA Gatornationals in Gainesville with a 4.103-second, 304.39-mph Friday afternoon run, Tasca topped Blake Alexander in the first elimination round, 4.140/308.14 to 4.251/296.29, but then was himself eliminated by fellow Ford driver and eventual winner Robert Hight. As a result, he moved up from 7th to 5th in the NHRA Mello Yello Nitro Funny Car standings with 184 points.

“Fifth in the points going out to Vegas - I’ll take it,” Tasca said. “We are right where we want to be in the points. Now we need a win. We have a car that is much more consistent than last year. We simply need to keep working on our game plan.

“I love racing at Vegas,” he continued. “It’s one of the top tracks in the country and there’s always a great atmosphere.”

Although he says the track surface is great to run on, the thin desert air puts horsepower at a premium.

“The racing surface is top notch, but you’re racing in high altitude so making power becomes more of a challenge,” he continued. “We really push the engines to the max to take advantage of the traction that The Strip offers.”