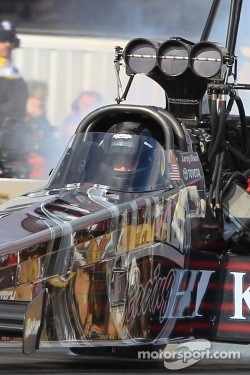 ■ 2010 NHRA Full Throttle Top Fuel champion Larry Dixon set the national Top Fuel elapsed-time record during the final round of qualifying at the season-opening NHRA Winternationals in Pomona, Calif. on Feb. 26. His 3.770-second pass at 324.98 mph earned the 49th No. 1 qualifier of his career. In eliminations, the Al-Anabi dragster lost traction at half track and was eliminated.

■ Because of the 20-point bonus from the national elapsed time record, Dixon enters the Gatornationals in fifth place in the NHRA Top Fuel point standings. He trails his teammate, fourth-place Del Worsham, by 10 points and leads sixth-place Tony Schumacher by six points.

■ One year ago at Gainesville, Dixon was the No. 3 qualifier; he defeated Pat Dakin and Brandon Bernstein before losing to event winner Tony Schumacher in the semifinals.

■ Dixon is just one round win away from joining John Force, Kenny Bernstein and Warren Johnson as the only Full Throttle Series drivers to win 600 rounds. Dixon is fourth on the NHRA’s career round wins list with 599 round wins. He won 62 rounds last season which is his career best and second most ever in Top Fuel; Tony Schumacher won 76 rounds in 2008.

■ Dixon won 12 races last season, more than any other year in his career. He is the first professional driver in NHRA history to win 12 races in 12 final rounds in a season. His 12-win total was also more than any other driver in the four NHRA Full Throttle classes this year. His 12 wins happened at Pomona, Calif., Baytown, Texas, Las Vegas, Atlanta, Joliet, Ill., Englishtown, N.J., Norwalk, Ohio, Sonoma, Calif., Brainerd, Minn., Indianapolis, Charlotte and Reading, Pa.

■ Dixon has been the No. 1 qualifier 49 times in his career placing him ninth on the NHRA’s all-time No. 1 qualifier list for all classes. He trails eighth-place Don Prudhomme by three No. 1s; Warren Johnson heads the list with 138.

Dixon prior to Gainesville:

“Everybody on the Al-Anabi team went to bed Saturday night in Pomona feeling great but went to bed Sunday night a little disappointed. There wasn’t enough track for what we were trying to do, and we went out in the first round. Whether they’re good or bad, you learn from every run so you just go to the next race. I know our entire Al-Anabi team is anxious to get back on the track this weekend.

“To follow the Winternationals with the Gatornationals is a great way to start the season with two of our biggest events so we obviously want to do well this weekend. What NHRA is doing to celebrate its 60th anniversary at given races this year is great. That it’s (Don) Garlits in Gainesville is really cool because he’s the guy that helped carve our sport into what it is today. Certainly the style of cars we race is because of him and nobody else.

“600 round wins would be great if we get it this weekend, but if we get round win No. 603, that would be a lot more fun the Al-Anabi team. I feel the same way about the round wins as I do about the race wins. I feel it’s more of a reflection of the teams, crews and crew chiefs that I’ve had the opportunity to work with than just me. Our sport is not a one-man-band thing; it’s group of people that works together as a team, and I’ve been fortunate to have been around some great groups of people.” 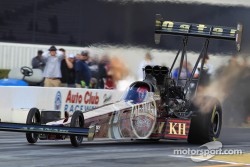 ■ Del Worsham made his Al-Anabi Racing Top Fuel debut two weeks ago at the season-opening NHRA Winternationals in Pomona, Calif. Worsham was the No. 5 qualifier at Pomona; in eliminations, he defeated Bob Vandergriff and Spencer Massey before losing to eventual event winner Morgan Lucas in the semifinals.

■ Worsham is working with crew chief, Brian Husen who joined Worsham’s team after two seasons as the assistant crew chief on Dixon’s team with crew chief Jason McCulloch. Husen has worked with McCulloch and team manager Alan Johnson since the 2000 NHRA season.

■ Worsham won at Gainesville Raceway in a Funny Car in 2004. Last year at this event, he was the No. 14 qualifier and lost to Ron Capps in the first round of eliminations.

■ Worsham has 25 wins in his Funny Car career; he is seventh on the NHRA’s all-time Funny Car wins list.

Worsham prior to Gainesville:

“I am totally excited about the way this season started. I felt our Al-Anabi team could have won race in Pomona, but we had some mechanical problems in the semifinals. I thought we had a shot to win, and it was still fun to watch Brian (crew chief Brian Husen) and Alan (team manager Alan Johnson) do what they do in Top Fuel. We made it to the semifinals in our first race so we are all very optimistic about going into Gainesville.

“Performance-wise, my Top Fuel debut went how I thought it would, but we didn’t expect to be battling rain, hail and cold; that makes a tough weekend no matter what. Sunday, with no rain in forecast, things pretty much went the way I expected them to with my car. The Al-Anabi dragster ran well…definitely well enough to win, but that’s what you expect from the Al-Anabi dragsters. It’s gonna be a great year in Top Fuel; there’s a lot of tough competition out here.

“I’m having fun racing these Top Fuel guys. Every time I spoke to someone before a run, I was excited, and I could see their excitement, too. I’ve known Morgan Lucas since he was a mechanic, and I’ve watched him come up through the drag racing ranks. Some of these guys are young guns who came up through the junior drag racing leagues. I’ve raced Bob Vandergriff, Spencer Massey and Morgan Lucas so far. I’m definitely one of the older guys out here; we may have come up in different ways, but we all want to win these races and show what our teams can do. I’m happy to be in the game with them.

“The Gatornationals is just a great event at an awesome facility with some of the best fans in all of drag racing. Every time we go there, it’s great, and it always lives up to our expectations. If the weather is good, I know we’ll have some huge crowds, too. I’ve won there before, and I expect the race will live up to everything it has over the years.”