The "Sarge" and Brown hope for great results in Atlanta

Off to Atlanta for U.S. Army duo – but first, a very special honor for Don Schumacher

COMMERCE, Ga. (May 1, 2013) – While it is widely known that only the strongest wear the colors of U.S. Army Soldiers, those who possess a mental, emotional and physical strength like no other, there have been those among them who have earned special recognition for their exemplary service over the last two centuries. 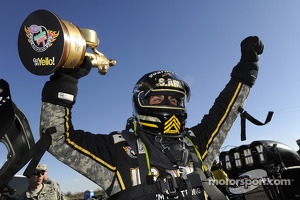 There are recipients of the Silver Star, which recognizes gallantry in action. There are recipients of the Distinguished Service Cross, which recognizes extraordinary heroism. And there are the most distinguished of them all who have received the prestigious Medal of Honor, which is presented by the President of the United States, in the name of Congress, and is conferred only upon members of the United States Armed Forces who distinguish themselves through conspicuous gallantry and intrepidity at the risk of life above and beyond the call of duty.

As U.S. Army drivers Tony “The Sarge” Schumacher and Antron Brown head to Atlanta Dragway for this weekend’s Summit Racing Equipment NHRA Southern Nationals, they’ll be making a very important stop along the way as one of the highest honors in all of motorsports is bestowed upon their team owner and Schumacher’s father.

Don Schumacher, whose teams have earned 11 NHRA world championships and 203 national event titles, is one of a quartet of racing dignitaries who make up the International Motorsports Hall of Fame’s Class of 2013 inductees. Joining the 68-year-old Schumacher, who also is recognized as a pioneer and safety innovator in the sport of drag racing, is NASCAR team owner and 14-time champion Rick Hendrick, 1989 NASCAR Sprint Cup Series champion Rusty Wallace, and legendary NASCAR crew chief Dale Inman, who was atop the pit box for Richard Petty’s record seven Sprint Cup championships and also for Terry Labonte’s 1984 title.

Tony Schumacher, who drove to seven of his father’s 11 NHRA titles and currently sits atop the 2013 Mello Yello Drag Racing Series Top Fuel standings, was honored to be selected to introduce his father at Thursday night’s induction ceremonies at the International Motorsports Hall of Fame in Talladega, Ala. Brown, also part of Thursday night’s festivities, narrowly beat “The Sarge” for the 2012 Top Fuel world championship in the Matco Tools/U.S. Army Dragster for Don Schumacher Racing and currently sits second in the Top Fuel standings.

Don Schumacher is the 11th member of the drag racing community to be enshrined in the International Motorsports Hall of Fame, joining such drag racing luminaries as NHRA founder Wally Parks (1992), Don Garlits (1997), Don Prudhomme (2000), Shirley Muldowney (2004), Bob Glidden and Joe Amato (2005), Warren Johnson (2007), Bill Jenkins (2008), and John Force and Kenny Bernstein (2012). In addition to his team’s NHRA titles, which include those in the Funny Car class for Gary Scelzi (2005), Matt Hagan (2011) and Jack Beckman (2012), Schumacher’s most notable contributions in the area of safety are highlighted by the Funny Car rooftop escape hatch, a lever to activate the fire suppression system on his Funny Car’s brake handle, and last year’s introduction of the revolutionary enclosed cockpit canopy for Top Fuel Dragsters.

As a driver, Schumacher won five NHRA national event titles, including the 1970 U.S. Nationals, through 1974, the year he “retired” from racing to take over the family business, Schumacher Electric. His mantra as a racer and businessman, “The harder you work, the luckier you get,” certainly helped him build Schumacher Electric into the world’s leading manufacturer of battery chargers, and helped him build a drag racing dynasty when he decided to return to the sport in 1997. Schumacher formed a Top Fuel team for his son Tony in 1998 after the younger Schumacher’s meteoric rise through the ranks in the 1990s and, in its first full-time season in 1999, it delivered its first NHRA Mello Yello Top Fuel world championship. The following season, the team partnered with the U.S. Army in what went on to be one of the longest-running and most successful sponsorships in motorsports.

This weekend on the outskirts of Atlanta, Tony Schumacher and Brown look to continue their Army Strong start to the season. In the first six events of 2013, Schumacher has made four final-round appearances with victories at Phoenix and Las Vegas. He holds a 70-point lead in the standings over defending-Top Fuel champion Brown, who scored the event title in Gainesville, Fla., and lost to Schumacher in the Las Vegas final. Brown’s Gainesville title was Don Schumacher Racing’s milestone 200th.

While Brown is a two-time Top Fuel event titlist at Atlanta to go with his Pro Stock Motorcycle title in 2006, the track bears the distinction of being the only one on the current NHRA Mello Yello Drag Racing Series schedule – with the exception of New England Dragway in Epping, N.H., where the series will compete for the first time next month – where Schumacher has yet to score an event title. He was fast qualifier last year and advanced to the Top Fuel final, where he lost to Steve Torrence to give him four runner-up finishes at the track.

After enjoying Don Schumacher’s moment in the spotlight Thursday night in Talladega, the U.S. Army Top Fuel Dragster duo most certainly will be looking to put an exclamation point on an already special weekend by charging to a final-round victory come Sunday night.

Your dad is being inducted into the International Motorsports Hall of Fame Thursday night in Talladega, Ala., and you have been chosen to make the presentation at the ceremony. How special is that?

“Anyone who gets into the Hall of Fame can look back on their achievements in a most incredible way. No one does it alone, especially in a sport like ours so, obviously, there are a lot of people involved and it’s a huge honor just to be a part of it. What made my dad a Hall of Famer was his ability to select people and put them in the right position to help get the job done over and over and over again. He selected the right people for the U.S. Army team over the years to win event after event, and championship after championship. It’s a tremendous honor for me, personally, just like it has been to represent the U.S. Army for such a long period of time, and I’m really looking forward to be helping induct Dad at the banquet in Talladega Thursday night.”

Talk about your season, so far. Seems like it’s been feast or famine with two event titles, four final-round appearance and two first-round defeats over the first six stops on the tour?

“Going out in the first round at Houston last weekend a little less famine and just the breaks. The right lane didn’t have what it took to get an 8,000-horsepower racecar down it on Sunday, and that was really a Friday thing. We need to get down the track on our first run, but we had some issues and some things go wrong. That’s going to happen. Otherwise, we have represented the 1 million Army Strong members of the U.S. Army to the best of our ability and we lead the point standings at this stage with those two wins and two runner-up finishes. We’re proud of that, but there is still a long way to go and we will continue to move ahead showing how the Army is the strength of the Nation, that the Soldiers are the strength of our Army, and how this Army-NHRA partnership provides Americans a platform to experience the power, speed, teamwork and technology that drives that strength.”

With the exception of New England Dragway in Epping, N.H., which is hosting the NHRA Mello Yello Drag Racing Series for the first time next month, you’ve earned event titles at every track but Atlanta Dragway that is on the current schedule. What will it take to finally break through this weekend?

“We’ve been in the finals at Atlanta many, many times over the years, so we’ve definitely run well there. We just haven’t won that final run of the day on Sunday and, at the end of the day, we just got beat. It isn’t over yet, by any means. I’ve got time left in my career and I’m going to win that race before it’s over. We just need to get the U.S. Army Dragster ready and go for it this weekend. It’s going to be a beautiful weekend and I get to kick things off by helping induct my dad into the International Motorsports Hall of Fame on Thursday. Then, we’ll head over to Atlanta and try to close the deal on a racetrack where I’ve yet to get my first win. We’ve got what it takes, for sure. We just need to go out and do get it done.”

Your team owner is being inducted into the International Motorsports Hall of Fame Thursday to kick off your weekend. Do you have any special thoughts about that?

“It’s a very proud moment just to be a part of something Don has established out here. For all the years he’s been out here winning championships for his son Tony and the U.S. Army, and Funny Car championships with Gary Scelzi and Matt Hagan and Jack Beckman, it definitely is a special, special feeling to be with a guy who had so much to do to shape the history of our sport, and to help revolutionize our sport to get it to the level where it’s at. In addition to winning Top Fuel championships and Funny Car championships, he’s an innovator in the area of safety to the point where it has even affected me, personally, as I was able to sustain a really rough accident at the beginning of this year and was able to walk away from it thanks to Don’s belief and vision and innovation. That goes a million miles not just for me, but for my family and for all the crew guys and their families, and all the jobs he’s helped sustain over the years. He’s truly a pioneer of our sport, for sure, and I’m just very humbled and honored to be a part of it.”

You had a rough ending to your weekend in Houston, going out in the first round Sunday. Are you glad to be getting back at it at Atlanta this weekend?

“I’m ready to go. It’s been an up-and-down year, for sure. The thing about it is, we just haven’t quite gotten into that zone. We always want it so bad, we just have to go out there and be poised and just keep on plugging away at it and, eventually, it will fall our way. That’s how rough the sport is, where you can do everything right but you still can get the wrong outcome. We don’t want to get ahead of ourselves trying too hard. We’re already putting in all the effort that we possibly can. So, we’ll go to Atlanta and, hopefully, things will just start falling our way. We’ll just give it everything we’ve got and we’ll just keep pressing hard.”

Edwards having another dream season as NHRA heads to Atlanta