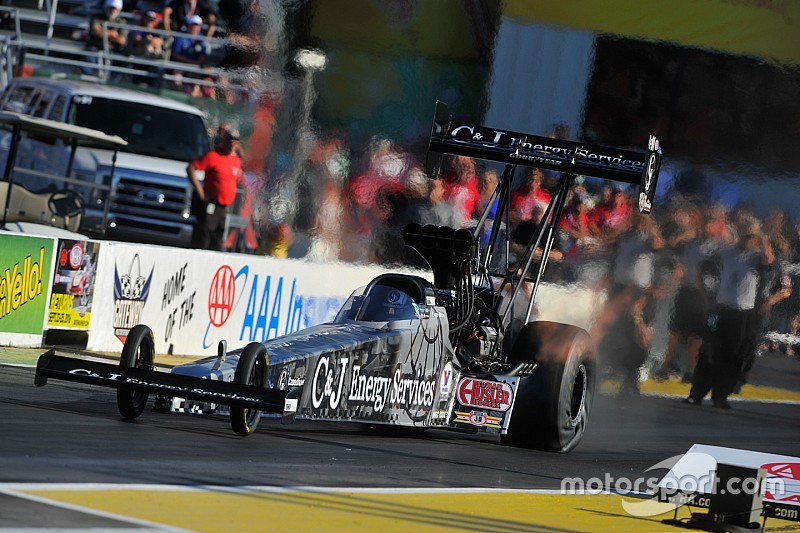 Top Fuel ace released late by Bob Vandergriff Racing but still hoping to get back on track in 2016.

Being the second most successful Top Fuel driver in NHRA history and finishing fourth in the 2015 championship wasn’t enough for Larry Dixon to retain his seat for 2016.

But the 62-time race winner is not giving up on his aim to race in NHRA this season, despite the opening round Winternationals at Pomona, Calif., being just a month away.

Said Dixon: “I am anxious to get back on the NHRA Mello Yello drag racing tour. I want to thank Bob for the opportunity to get back to full-time racing and we had a good season with fourth in points. It felt good to show I can still be relevant behind the wheel.

“I know the timing’s not the best this late into the off-season, but I’d like to do whatever it takes to get back on the circuit – driving, consulting or being a member of the media.”

Dixon suffered a huge crash at Gainesville, Fla., last year, when the front end of his Top Fueler collapsed as he approached the finish line at around 300mph. The resulting accident, which sent his car 50 feet into the air before crashing into a retaining wall, fractured his T4 and T5 vertebrae. Despite being eliminated from Gainesville, Dixon did not miss any subsequent races.

“I was awake through the whole crash but I had a 109G impact coming back down to earth, and 45G load when I hit the wall… But I would have gotten back in the car the next day if we had a backup chassis. That’s how I was raised.

“I’m finally 100 percent healed now,” Dixon went on, “and I was excited about a championship run in 2016. I felt pretty good by October and Dr. Terry Trammell at Ortho Indy gave me the green light for a more aggressive workout program this off-season.”

Although he didn’t clinch any wins in 2015, the 2002, ’03 and ’10 Top Fuel champion managed to reach six final rounds and was beaten in the standings only by Antron Brown, Tony Schumacher and Richie Crampton.

Larry Dixon has joined Motorsport.com as our NHRA columnist. Look for his season preview in the first week of February.