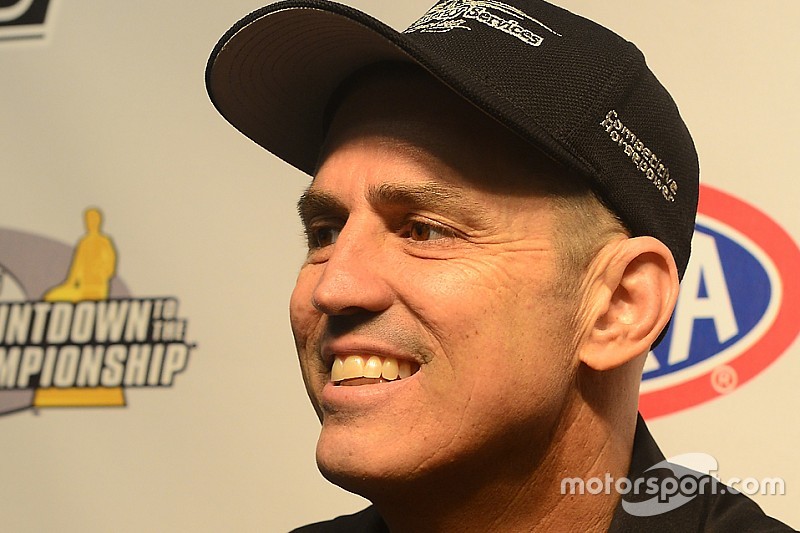 The NHRA has suspended its three-time Top Fuel champion indefinitely from both the Mello Yello professional and Lucas Oil sportsman series it sanctions.

Three-time Dixon showed off his new inline two-seater NitroX2 dragster on the first day of the SEMA Show in Las Vegas last Tuesday. The two-seater was intended to be the showpiece of the Larry Dixon Top Fuel Experience, to give 1/8-mile rides to the paying public in a 10,000-horsepower dragster.

Six days later the series announced: “The NHRA imposed an indefinite suspension of competition privileges against Larry Dixon for violating NHRA rules, particularly Section 1.3.1 Participant Conduct and 1.6.3 Chassis Inspection of the 2017 NHRA Rulebook. NHRA Tech Department discovered the use of a NHRA chassis tag on an unauthorized and unapproved two seat dragster

“Any further incidents could result in further action. Larry can appeal the decision, per the 2017 NHRA Rulebook.”

Dixon has been working to establish a team of his own since being let go from Alan Johnson Racing, which had prepared cars for Al-Anabi Racing. It was with that team that Dixon secured his third title in 2010; his career total stands at 62 national event victories.

Dixon’s Larry Dixon Racing team made its first NHRA Mello Yello 2017 appearance at the third event of the year in Gainesville. Dixon made the field in 13th but was defeated by Brittany Force in the first round. But he was only able to race after NHRA demanded he remove sponsorship decals from his dragster; he was advertising the World Series of Drag Racing, a property owned by NHRA’s largest competitor, IHRA.

The team hasn’t raced since then but Dixon has been driving in the Lucas Oil series for Bartone Brothers, taking their Top Alcohol Funny Car to the winner’s circle at Norwalk, Ohio in May.

Two weekends ago at The Strip at Las Vegas Motor Speedway, Dixon crashed but fortunately his car sustained way more damage than its driver.

A contrite Dixon spoke with www.competitionplus.com after the suspension was announced. He said, that it was never his intention to contraindicate any rules associated with NHRA. Associates from the sanctioning body came to his creation and removed the chassis inspection sticker that remained on the initially built single-seater after modifications by chassis constructor Murf McKinney in order to accommodate a second seat.
While he knows any NHRA competition-bound chassis must be inspected and certified by the sanctioning body, he had been in touch with current president Peter Clifford throughout the build and noted the marketing intentions of the machine. Clifford, he told Competition Plus owner Bobby Bennett, was enthusiastic about the project.
The two-seater has only been run in private, paid testing, and never with other competition machines. It has run at both NHRA-sanctioned and IHRA-sanctioned tracks, without issues.
Next article

Epic title battles to be decided at Pomona's NHRA Finals