LAST-DITCH EFFORT NOT PRETTY, BUT EFFECTIVE

Tim Wilkerson went into the final qualifying session for the Summit Racing Equipment Southern Nationals in the unenviable position of being the 17th-ranked car attempting to make a 16-car field. Having smoked the tires on his first pass, on what ended up being a hot and mostly sunny day, he needed some sort of A-to-B effort in Q4 if he wanted to be part of the festivities on Sunday. 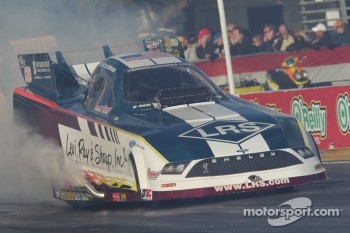 Wilk's final run was far from perfect, as it began to spin the tires about 2.8 seconds into the lap, but at that point the driver took over and his gallant effort, pedaling the Levi, Ray & Shoup Shelby through the tire spin, was the difference. His 4.326, run in a haze of tire smoke, was enough to put him in the 16th spot, where he stayed after Brian Thiel encountered problems on his run and failed to bump his way back in. Wilk will face No. 1 qualifier John Force in round one on Sunday.

"This thing is just being so aggressive I can't hardly tune it down enough to get it from end to end," Wilkerson said. "The bump spot was pretty soft, and all we were trying to do was get a decent lap on the board, but it still went out there like we had it set on 'Kill' and it spun them again. I had to have the mentality that I was going to get it to the finish line one way or another, whether it was still running or on fire, and it managed to make it just enough to get us in.

"I'll tell you what, if we can just get something close to a handle on this thing, we can do some good with it. I know for a fact you can't win the race from the 17th spot, so on days like this 16th feels a lot better than it does when you start out high up and just sink and sink and then barely hang in there. We needed a good lift there, and it wasn't pretty but it worked."