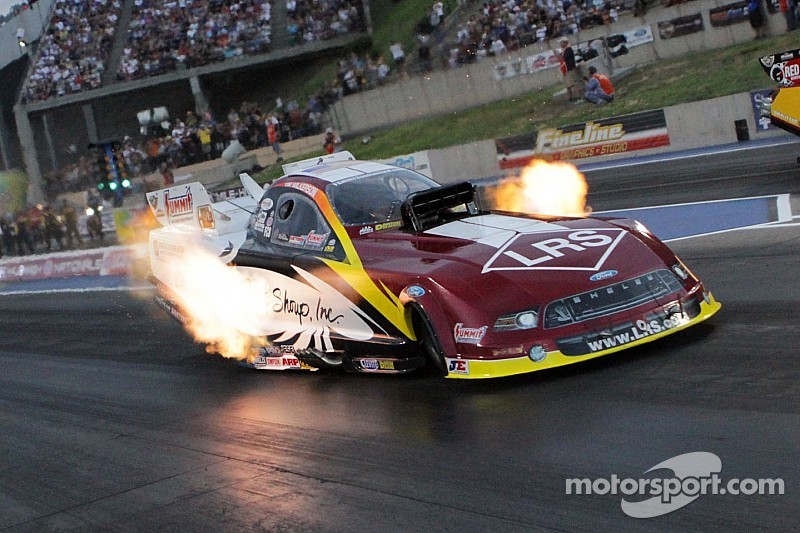 “That 4.03 in the first round was pretty impressive,” said Wilkerson. “I was happy with that. As the track got hotter, I did a good job until the finals. I’m really unhappy about what it did in the final. I was trying to go about a .14, and the thing broke the tires loose.”

En route to the winner’s circle, Wilkerson raced past Del Worsham, Jack Beckman and John Force in the earlier rounds. Wilkerson, who qualified sixth, is now No. 8 in points standing.

Capps, the Gainesville and Houston winner, beat Alexis DeJoria, No. 1 qualifier Cruz Pedregon and defending world champ Matt Hagan on his way to the final round. Capps retained the points lead in Funny Car.

In Top Fuel, Brown pushed his Matco Tools dragster to a final-round performance of 3.887 at 310.48 mph to defeat Leah Pritchett’s 4.202 at 260.41 in her Dote Racing/Gumout dragster. Brown has 49 career wins and four at Atlanta Dragway, tying Larry Dixon for most in the category. His last win at this event was in 2013. Brown, the Four-Wide Nationals at Charlotte winner, is the only Top Fuel driver to have won multiple races this season.

“It wasn’t just a good day, but a good weekend,” Brown said. “We’ve been aiming to start off with a good qualifying run. The first run out of the box on Sunday set the tone for the whole weekend. We started getting data in hot, cool, and middle track temperatures when we tested in Indy. You have to make some swings with the combination we run now. (Crew chiefs) Brian Corradi, Mark Oswald, and all the Matco boys have been putting the work in together. It definitely showed this weekend.”

"Today was a great day for Summit and KB Racing for sure," said Line. "This is the way that you normally dream about it, but it usually doesn't work out that way. Today, it did. I really thought the final was going to go the other way. I got a bit of luck. I wasn't fast today. I was maybe mediocre. Greg had the car to beat. He was driving better than everyone else, and he should have won it. He wants to win more than anyone I've ever met, and that's what makes him the best."

Line and Anderson met in a final round earlier this year at Gainesville, where Anderson was the victor. This was the 24th time the two Summit teammates have gone head-to-head in the final round and Anderson holds a 14-10 advantage.

Arana earned his first win in Pro Stock Motorcycle since 2009 and seventh overall with a 7.236 at 196.30 on his Lucas Oil Buell to beat 2014 event winner Eddie Krawiec, whose Screamin’ Eagle Vance & Hines Harley-Davidson slowed near mid-track.

"I knew I could keep winning, but I had to believe in myself," Arana said. "In the final, the bike jumped like a bronco," Arana said. "It pulled to the right, but I was not giving up unless he was way in front of me. As long as I had control of the bike, I was staying with it."

Arana defeated defending world champ Andrew Hines, Jim Underdahl and son Hector Arana Jr. to make it to the final round. Arana was the seventh qualifier and holds the No. 3 spot in the points standing.

The 2015 NHRA Mello Yello Drag Racing series continues with the NHRA Kansas Nationals on May 22-24 in Topeka, Kan.

Tommy Johnson, Jr. looking for first shot at a final round