Time for NHRA to adopt fuel injection is now

The nitro classes spitting fire as they spin their Goodyear tires is exciting to watch at an NHRA event. However the technologically advanced and diverse class is Pro Stock

I love beating an old horse to death.

That’s why today I’m on a rant about NHRA Mello Yello Pro Stock drag racing. Who cares, you say? All you want to see is the nitro classes spitting fire, spinning their Goodyear tires and going close to 330 mph in 1000 feet, right?

Truth be told, all of those Funny Car and Top Fuel entries are using, pretty much the same mechanical stuff under their plastic bodies and behind their drivers, respectively. The most technologically advanced and diverse class in NHRA professional racing is Pro Stock. Hands down.

Here you have manufacturers vying for season-long honors with 2012′s champion Dodge Intrepid battling Chevrolet’s Camaro and, to a much lesser extent Ford’s Mustang. The bodies kind of tell you what kind of car it is, while the engine secrets are more protected than anything happening at the Pentagon in Washington, D.C.

Wander through the Pro Stock paddock and you’ll never see a naked engine. Nobody wants to shre their secrets – and nobody will.

So what”s the problem? NHRA is stuck in the 1980s with regard to its induction systems. Pro Stock is still using carburetors where Top Fuel, Funny Car and many in the Pro Stock Motorcycle contingent are utilizing electronic or mechanical fuel injection.

Heck, even NASCAR adopted EFI for its primary Sprint Cup Series in 2012 – and that took about three years to implement, from the time it was announced until the first cars went on the track at Daytona for the 2012 Daytona 500. Were there some hiccups? Sure, but they were mostly overcome before the season even began. And now it’s not even a talking issue. Everyone runs EFI; nobody has anything further to say about it. 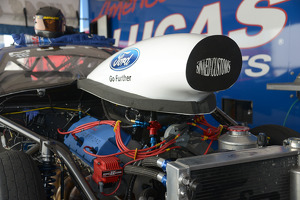 The nose of Larry Morgan’s Ford Mustang Photo by Anne Proffit
What’s holding NHRA back from changing over to EFI? NHRA’s answer to that question is the customary one: cost. They say it will be prohibitively expensive for the smaller teams to move to EFI. Well, shoot! Racing is expensive… if folks can’t afford to be competitive, there are other ways to spend the money than to compete in Pro Stock. There’s plenty of Lucas Oil sportsman classes out there for the taking.

it takes testing a lot of carburetors to find a pair that’ll work on a Pro Stock car. And with their high profiles, the carburetors require a bulbous nose atop the Pro Stock hood that pretty much negates any manufacturer identity. Bringing in fuel injection might also allow a very interested Japanese manufacturer to get involved in Pro Stock. Are you listening, NHRA? Hey, as I type this there might be more people in the stands to watch sportsman qualifying than Pro Stock, thanks to the identifying factors of the cars.

The amount of money invested in EFI might be scary except for the fact that each competitor doesn’t have to buy 3-4-5 or even 10 sets of of fuel injection systems to find one that works. All they need is expertise behind the screen of a computer.

And who in this business doesn’t have that expertise? I think nearly everyone that’s running a Pro Stock car today has to rely on computer skills. If anyone’s doing it without those skills, please have them come to the media center and introduce themselves.

The problem has got to be in Glendora. Does NHRA have the technical crew to supervise EFI? Can’t they do what NASCAR’s done and have a spec ECU that blocks out traction control, the real bugaboo that’s being claimed as a deterrent to EFI as a control for induction? It must be the expense of manpower to supervise development of electronic fuel injection and to police it is one of the problems. NHRA doesn’t want to spend that money

Therein lies the real issue. NHRA doesn’t want to spend money to move forward in this world. It continues to be reactive, rather than proactive and that stance loses constituency in the stands and in the pits. If NHRA wants to be relevant to more people that love cars and racing, they’re going to have to change with the times. That means more than having a Twitter or Facebook account, more than putting the house publication, National Dragster online.

No, that means moving the playing field towards relevancy. There’s no better place to start that march than in Pro Stock, the most technologically savvy category in all of drag racing.

J. Force, Dixon, Johnson and Krawiec power to No. 1 qualifiers in Denver