Titles in the balance in Vegas 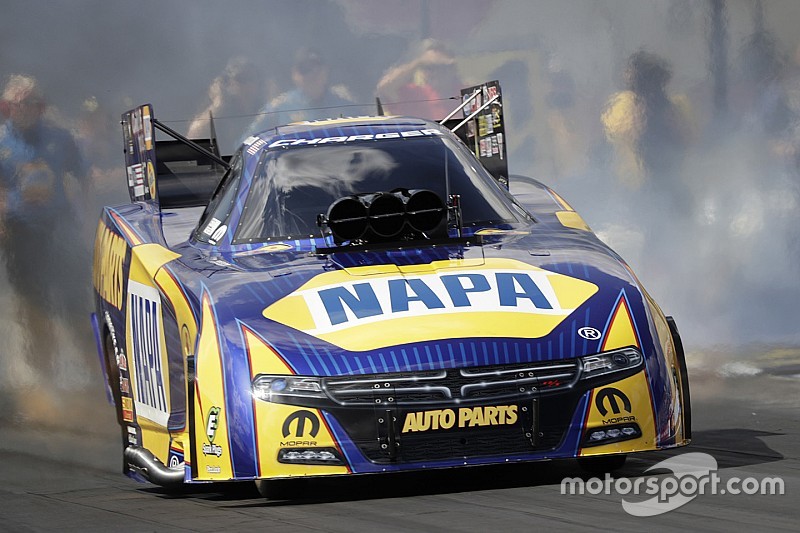 NHRA could see champions crowned this weekend but the title favorites are trying not think about it, as Anne Proffit reports.

The 2016 NHRA Mello Yello Drag Racing Series is sprinting to its close, with only two events remaining in a 24-race season. The penultimate event, the 16th annual Toyota NHRA Nationals on The Strip at Las Vegas Motor Speedway takes place the final weekend of October, a tradition that incorporates both competition and fun, as it either falls on or close to Halloween.

.For the four Mello Yello categories: Top Fuel, Funny Car, Pro Stock and Pro Stock Motorcycle, the Countdown to the Championship could continue to the season finale in Pomona two weeks hence.

That being said, there’s a very good chance for reigning and two-time Top Fuel champion Antron Brown to rack up his third category title on the dragstrip that abuts Nellis Air Force base. Brown, with seven wins in his pocket and a 150-point lead over Doug Kalitta, earned his second title at this race last year and could take his pink-emblazoned Matco Tools “Tools for the Cause” dragster to the top of the dragster mountain once again.

Brown is keeping his ambitions in check, however, as his Don Schumacher Racing team led by crew chiefs Brian Corradi and Mark Oswald will “try to keep doing the same things we’ve done to get to this point.

“Our heads are really focused on the end – and the end is not until they say, ‘Meet the 2016 world championship winner!’ We’re in a great situation right now, but we don’t feel comfortable yet and our work is not done yet.”

Brown, who has won three of the four races so far in the Countdown to the Championship continued: “When you get into the Countdown, the bar gets raised and we were ready for that challenge. Our mindset is always striving to be better and trying to be more efficient.

“When we get to the racetrack, you can look everyone in the eye and know we’re all ready. You can feel that emotion in our trailer and that’s the coolest part.”

Triple 2016 race-winner Kalitta is aiming to stop Brown from achieving a second title in consecutive years at Las Vegas and the quiet nephew of Kalitta Motorsports owner Connie Kalitta is the defending winner of the fall Las Vegas race.

Despite his huge deficit to Brown, Kalitta noted: “Las Vegas is a great track for Kalitta Motorsports as a whole: I won the Toyota Nationals last season and then we had that great all-Kalitta Toyota Funny Car final here in April.

“I am very proud of this Mac Tools Toyota team. They continue to fight and work hard. We’re going into this planning to win and using that momentum to finish the season strong.”

Kalitta has 22 points in hand over third-place Shawn Langdon, 41 over Brittany Force and 47 on Steve Torrence.

In Funny Car, the picture is not nearly as clear. As he has for most of this season, four-time runner-up Ron Capps holds the lead with five victories and 2465 points, but his three DSR teammates are in hot pursuit: Tommy Johnson Jr is 64 points back, four-time winner Matt Hagan needs to make up 88 markers and Jack Beckman is 131 points in arrears. Reigning world champ Del Worsham lies fifth and has to make up 145 points, going into the penultimate race. In order to clinch, Capps has to exit Sin City with a 131-point lead, as the maximum number of points a driver can earn is 130.

Capps, with his Rahn Tobler- and Eric Lane-led Dodge Charger R/T crew know they have a lot of work to do and this racetrack has its intimidations for the NAPA DSR team. In the spring race at Las Vegas in 2012, Capps failed to qualify, causing team owner Don Schumacher to perform a massive shake-up, aligning the driver with Tobler. Earlier this year, after winning the season-opening race in Pomona, Capps failed to qualify again for the spring Las Vegas race. Yet he also has had four wins here in the fall race.

Capps ranks second all-time in Funny Car victories with 49 in 481 races over his 22-year professional career, yet has somehow never clinched the crown. He’s understandably wary, therefore, about his prospects.

“We have eight qualifying sessions left (in this season) and as many as eight elimination rounds,” he said, “so there is so much racing left that anything can happen.

“You try not to think about the championship but it’s hard. I’ve been trying to keep busy and not think a lot about it. We’re driving 330mph Funny Cars with nitro in the tanks so anything can happen, but this team has had such a great season that it would be a shame not to win it. That’s why we race.”

Pro Stock is equally tight, with the top five Countdown drivers still mathematically eligible to take the title. Jason Line has won eight times this year, his teammate Greg Anderson has seven wins and the Summit Racing/KB Racing Chevrolet Camaro duo are separated by a meager 26 points. Yet remarkably, after winning the Countdown-opening race at Charlotte, Line hasn’t won since while Anderson’s last victory came in Sonoma in July.

Behind the duo are Camaro drivers Vincent Nobile with a single victory but sufficient consistency (-114), Shane Gray (-134) and Summit Racing teammate Bo Butner, 140 points back. Neither Gray nor Butner has turned on the winner’s light thus far this year.

It is likely the 2016 Pro Stock Motorcycle titleholder likely won’t be crowned until the season finale in Pomona two weeks after Las Vegas. While Andrew Hines intends to take his sixth title, he remains 17 points behind his Vance & Hines Screamin’ Eagle Harley-Davidson teammate Eddie Krawiec. Both of these guys have five wins apiece in 2016 but each has faltered at times this season.

Waiting in the wings are Suzuki rider Jerry Savoie (-49), who learned how to lose a championship at this race last year, when he red-lit in the Las Vegas race against Hines.

Also lurking are three-time champ Angelle Sampey (-60), Chip Ellis (-97) and former champ LE Tonglet (-137). The riders in third through sixth each have a single victory but their consistency has gotten them to the point where they can hound the Harley riders, hoping to force errors.

The weather for this weekend should be perfect with no rain in sight. Temps should be cool, in particular for late Friday night qualifying and for eliminations on Sunday.

Tequila Patron Toyota Camry driver Alexis DeJoria is once again hosting free mammograms for race-going women (regardless of whether they have insurance) on Friday and Saturday. The four-year program sponsored and promoted by DeJoria during Breast Cancer Awareness Month has allowed more than 300 women to have October mammograms at the Dallas and Las Vegas tracks.