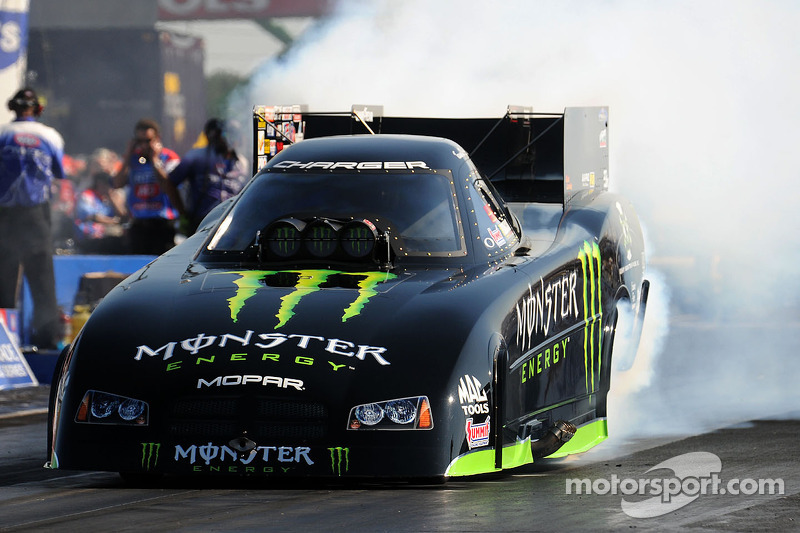 'I grew up at the ractrack with my dad racing,' he says

The weekend ahead already has the makings to be one to remember for Tommy Johnson Jr. The Don Schumacher Racing nitro Funny Car pilot, campaigning the Make-A-Wish Dodge Charger R/T that is fully funded by sponsor Terry Chandler, will race for the trophy on Father's day at the 14th annual NHRA Thunder Valley Nationals at Bristol Dragway with his dad, Tommy Johnson Sr., in attendance.

Although Tom Sr. never pushed 'Junior' to follow in his drag racing footsteps, the ambition to do so was already ingrained.

"I grew up at the racetrack with my dad racing, and for me it was always just a way of life," said Johnson. "Obviously, I wouldn't be at this point in my career without having that influence.

"But there were stipulations involved if I wanted to race."

Tom Sr. and wife Sarah demanded that Johnson focus on school work and get good grades if he wished to race, and the motivation was a useful tool. In fact, it was so useful that Johnson took a page from the Johnson Family Rule Book to inspire his young nephew, Gage, earlier this year.

"Gage was struggling a little bit in school, and I told him that if he brought his grades up he could be part of our Make-A-Wish team in Charlotte at the Four-Wide Nationals," said Johnson. "It worked. Gage brought his grades up and I followed through on my part of the bargain. He was a great help for us, and a motivator for the whole team in Charlotte, so I told him that if he kept those grades up, he would get to come on the road with us this summer. Looks like that's going to happen, and I couldn't be more proud of him."

Young Gage – whose mother, Wendy, was the youngest female NHRA national event winner when she earned the Super Comp victory in 1992 at the Kansas Nationals in Topeka at the age of 17 – will join the team again for the races in Chicago and Norwalk later this month and in the early part of July.

"That motivation my dad used back then still seems to work today," said Johnson.

Racing on Father's Day has been favorable for Johnson in the past. He won his first NHRA national event on Father's Day in Columbus, Ohio, in 1988 driving an alcohol Funny Car; he beat Pat Austin on a holeshot in the final round to earn his first trophy.

One of Johnson's most memorable triumphs was the 2007 victory on Father's Day at Old Bridge Township Raceway Park in Englishtown. As the No. 1 qualifier, Johnson got the win light in the first round but his Funny Car burned to the ground at the top end, making a return for round two unlikely. Thanks to a very supportive group and his ability to keep cool behind the wheel, however, Johnson did return; and he went on to win the race.

"It's really neat to have accomplished that because it wasn't just Father's Day – my dad's birthday is also near Father's Day, so it was a double-up gift for him," said Johnson, whose father's birthday is June 17th, the Tuesday following the Bristol event this year. "It makes for a very special win that is set apart from the others."

Also notable heading into this weekend is the fact that Johnson actually earned his first national event win at Bristol Dragway in 1987 driving an alcohol Funny Car and competing under an alternative sanctioning body. Additionally, he had the honor of contesting the NHRA Showdown at Bristol several times, which pitted Funny Cars vs. Top Fuel dragsters.

"It's always a great time in Bristol," said Johnson. "We have a lot of good memories there, and I'd like to get that double-up present for my dad again this weekend. The team has worked very hard since the last race and put in a lot of hours to get our car in good shape. It very well could happen."