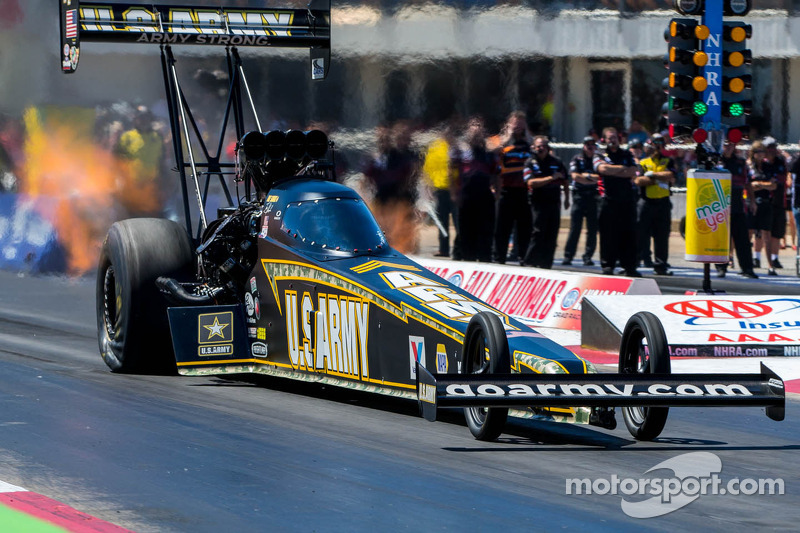 U.S. Army duo heads to Auto Club finals with one chance at a storybook ending

POMONA, Calif. (Nov. 5, 2013) – The hunter and the hunted. A year ago this weekend, the U.S. Army driver duo of Tony “The Sarge” Schumacher and Antron Brown arrived at Auto Club Raceway in Pomona, Calif., for the NHRA Mello Yello Drag Racing Series finale each relegated to one of those two roles in what turned out to be the season’s most tense and dramatic weekend.

As a testament to the fact the Army is the Nation’s preeminent leadership experience, where the Nation’s future leaders are developed and empowered with the confidence to take decisive action when needed and the flexibility to excel in constantly evolving situations, the U.S. Army driver duo occupied the top two spots in the standings. Schumacher, already a seven-time Top Fuel world champion in his U.S. Army Dragster for Don Schumacher Racing (DSR), was 65 points behind his teammate Brown, who was vying for an elusive first Top Fuel crown in his Matco Tools/U.S. Army Dragster for DSR. 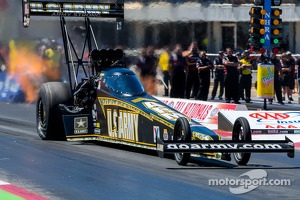 When Brown was ousted in the opening round of Sunday eliminations for the second event in a row – this time courtesy of a ruptured fuel line and subsequent cockpit fire – the door was open for Schumacher to claim his eighth career title if he could just run the table. While Brown watched nervously from the sidelines, “The Sarge” and his U.S. Army Dragster were in their usual Pomona form, powering their way round by round to a meeting with Brandon Bernstein in the final. Now just seven points behind Brown in the standings, Schumacher was just one 1,000-foot run and a win light from another storybook finish, like he had done at Pomona so many times before.

But it was not meant to be for the seven-time champ as Bernstein capitalized on a holeshot despite Schumacher’s impressive run of 3.753 seconds at 325.53 mph, and Brown was crowned Top Fuel champ for the first time in his career while Schumacher had to settle for the runner-up position for the second time in three seasons and the third time in his career.

This weekend, Schumacher arrives in Pomona already eliminated from championship contention while Brown remains the only driver with a mathematical shot of overtaking points leader Shawn Langdon of Al-Anabi Racing. Schumacher is in sixth place, 162 points behind Langdon but 65 behind Brown for second place – the same number of points he trailed Brown by a year ago. Schumacher is 29 points behind third-place Doug Kalitta, 25 behind fourth-place Spencer Massey, and four behind fifth-place Morgan Lucas.

With a maximum 150 points available this weekend – including a 20-point bonus for setting a national elapsed time record – Brown’s chances of repeating as champion would need nothing short of a major meltdown by Langdon’s team, which he trails by 102 points. But aside from Langdon, Brown has been the hottest driver in the Top Fuel ranks heading to Pomona. After starting the six-race Countdown to the Championship by failing to qualify for Sunday eliminations at zMAX Dragway near Charlotte, N.C., then getting eliminated in the second round the following weekend at the Texas Motorplex in Ennis, Brown and the Matco Tools/U.S. Army team have made three consecutive final-round appearances with victories at Gateway Motorsports Park near St. Louis and The Strip at Las Vegas Motor Speedway. He was runner-up to Langdon at Maple Grove Raceway near Reading, Pa., in his other final-round appearance.

Even though the recent surge has enabled Brown to get no closer than 102 points to Langdon, the defending Top Fuel champ has vaulted all the way from ninth to second in the standings since the Countdown opener at Charlotte. It might be a pipe dream to think he could make up 102 points and successfully defend his 2012 title. Then again, stranger things have happened at Pomona. Just ask Schumacher.

Headed to Pomona this year, the storyline is drastically different from a year ago, and different from most of the years you’ve been going there with a championship on the line. What will be your approach this weekend?

“We’re just going to go out and do our job, be a machine, do the same thing every time and try and try and try. The Army that we represent is the strength of our Nation, and the Soldiers are the strength of our Army. This Army-NHRA partnership we are so proud to be the focal point of provides Americans a platform to experience the power, speed, teamwork and technology that drives that strength. That said, I’m also proud to say there’s not a team out here that tries harder. There are a lot of teams out here that perform well, but there’s no one who works harder than my guys. At the end of the day, the kind of adversity we’ve faced this season is half the battle. It’s all about getting through the adversity, keeping us on the track and winning races. We may not be able to go out and win the championship this year, but we can change the direction of other stuff, so now the goal becomes going out number two. We’ve just got to go out and win so we can spend the winter remembering that we know how to win.”

How do you feel about how things have gone this year to get you to this point?

“First of all, this is a great team. This is a team that has never lost focus. We get it. Unfortunately, a lot of the time we’ve been trying to do stuff and we haven’t been where we’ve needed to be, results-wise. We haven’t always been the fastest car out there. But we’ve been trying advanced stuff. We’ve been trying stuff we don’t even share with our other (DSR) teams. They don’t ask for it, we don’t give it to them. We have different tune-ups. Our point of view is that, at some point down the road, we’re all going to need it, so we’ll be a year ahead of everybody else.”

You’ve had some truly memorable moments at the Pomona season finale during your career, and last year almost added to your collection of storybook endings. Do you have a certain fondness for the place?

“Pomona’s been truly amazing for us over the years. To me, so many times, it’s been what every single American boy dreams of – you’re up to bat in the bottom of the ninth, bases loaded, full count. Whether you end up winning it or not, you’ve had that experience, you’ve lived that dream and, later in life, when you’re chatting about great moments you’d like to relive if you’re given the chance, Pomona is going to come up more than any of the others.”

What are your thoughts as you head back to Pomona, where a year ago you finally won your first Top Fuel world title?

“With our team, it was our fifth year being together. We kept on making that climb to the top of the mountain and we got so close so many years before and just couldn’t take that last step to get on top, like Mount Everest. When you’re trying to take that last step and slip and fall all the way down to the bottom, that’s what it feels like to run for the championship and you don’t bring it home. Last year, we got to experience that incredible feeling where you take that last step and finally get to hoist your arms in the air and say we finally made it to the end of the journey and got what we set out to get, and that’s to be king of the mountain for a year. That feeling will never leave us. And we’re part of that unique group known as NHRA world champs.”

Aside from points leader Shawn Langdon, you’ve had the most successful Countdown this year despite the fact you did not qualify for the playoff opener at Charlotte. What are your chances of completing the mission this weekend?

“All the hard work is finally paying off. We just never quit, even with all the struggles we went through in midseason and starting the Countdown. The results have been showing that. We’ve just wanted to be able to go to Pomona and be able to contend for the championship. It’s Langdon’s championship to lose right now. We know he has a good points lead, and he really has to mess up out there. It’s hard to go out there and predict what another team will do. We’d like to go out there and be the spoiler. And we have to win the race and maybe set a record to catch him. We’ll give it our all and see where everything lands.”