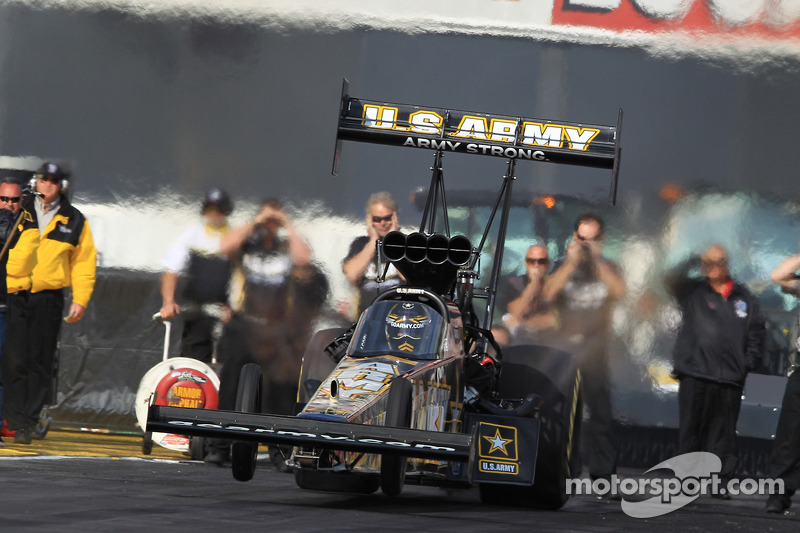 SCHUMACHER LEVELED IN SECOND ROUND 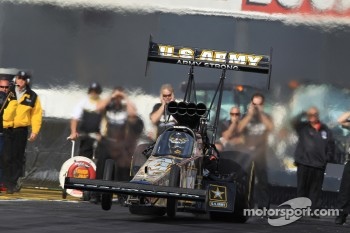 Tony Schumacher aboard his DSR US Army Top Fuel Dragster

Having to place in the top two to advance to the third and final round (his foursome included Steve Torrence, Larry Dixon and Shawn Langdon), the engine in Schumacher's U.S. Army Reserve Top Fuel dragster gave way just past half track and his day was quickly over.

"Man, what a disappointment," said the seven-time world champion. "We had such a great car all through qualifying and in the first round of eliminations. It's unfortunate but we will pick up the pieces and move on. We still have a mission to complete for our Army Strong Soldiers."

In the first round, Schumacher, with a 3.815-second pass at 325.30 mph, was the quickest and fastest amongst a group that featured Doug Herbert, Torrence and Doug Foley.

"Obviously, we were quite happy with that result," said the Chicago-area resident. "But, we just couldn't carry that performance over into round two. I'm not sure what happened from an engine standpoint, but I'm confident the guys will figure it out and we'll be ready for the next race in two weeks."

When the NHRA Full Throttle Drag Racing Series hits Royal Purple Raceway outside of Houston, April 29-May 1, for the O'Reilly Auto Parts Spring Nationals, the racing format will return to the traditional two-wide.

I didn't mind the four-wide deal this time around.

"I didn't mind the four-wide deal this time around," said Schumacher, who holds fourth in the standings. "Of course, we're all used to pairing up since that's what we do the majority of the time. No matter the format, we just want to get back into the thick of the action as soon as possible given the result here today."


Schumacher's U.S. Army Racing teammate, Antron Brown, experienced a similar fate at zMAX Dragway. After advancing into the second round via a 3.872-second run at 320.05 mph, he smoked the tires and did not place in the top two which would have pushed him into the final round.

"I guess it wasn't our day," said the New Jersey native, third in the points. "Up to that round, my car was running pretty well. We'll sort things out. We're going to test here tomorrow so we can go to Texas with guns blazing."