We're going after it tomorrow, you can count on that.

Following a lengthy rain delay, Schumacher laid down a 3.798-second pass at 326.71 mph in the fourth session and thus slipped in right behind pole sitter Del Worsham in Sunday's order.

Schumacher's speed was the second fastest since the NHRA went to 1,000-foot racing. He set the national record earlier this year at the season opener in Pomona, Calif. - 327.03 mph. "The U.S. Army Reserve car has been running great all weekend, so I wasn't surprised we put up the number we did," said the Chicago-area resident. "We came up just a little short of being number one, but that's all right. We're now ready to go four-wide tomorrow." 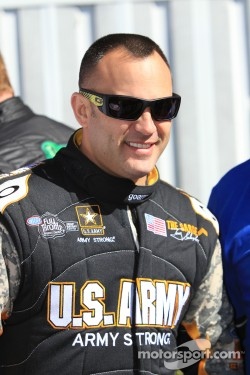 Schumacher will line up alongside Doug Herbert, Steve Torrence and Doug Foley for the first round of eliminations beginning at 11 a.m. ET. The top two finishers advance to the second round.

"We just have to go out and do our own thing," said Schumacher. "I really think we'll see some terrific racing tomorrow. It seems like all of the drivers are more comfortable with the four-wide format, which makes it exciting for everyone."

Schumacher will be looking for his first victory of the season, while gaining valuable points in the standings. He entered the fourth round of the NHRA Full Throttle Drag Racing Series holding third-place, 43 points behind Worsham in first.

"We just want to keep improving," said Schumacher. "Of course, a win would definitely keep us moving in the right direction. We're going after it tomorrow, you can count on that."

On the other side of the U.S. Army Top Fuel Racing camp, Antron Brown ended up grabbing the ninth starting position. He will join a first round foursome that will include Worsham, Morgan Lucas and David Grubnic.

After capturing the race in Las Vegas two weeks ago, Brown arrived in North Carolina sitting in second-place, eight points behind Worsham.

While Schumacher and Brown have been working hard in the Tar Heel State, U.S. Army NASCAR Racing driver Ryan Newman has been doing likewise at Talladega (Ala.) Superspeedway.