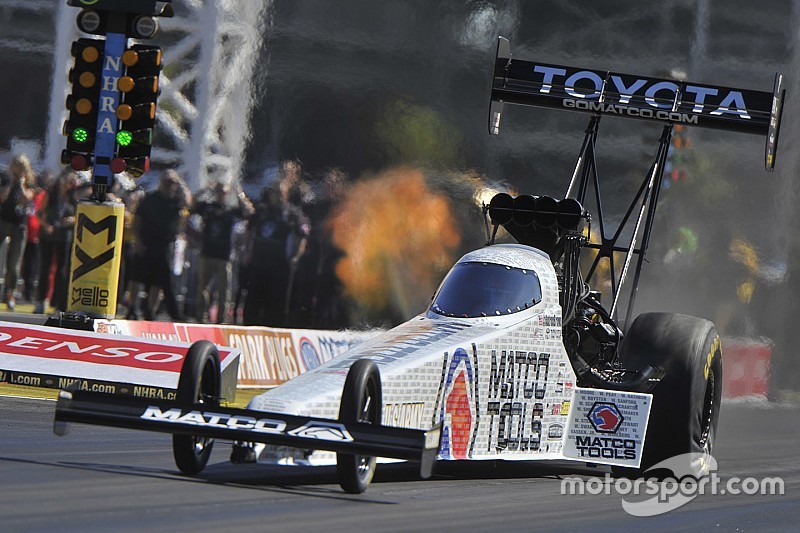 Brown powered his Matco Tools dragster to a 3.843 second pass at 314.60 mph to defeat first-time finalist Troy Buff, who drove his Bill Miller Engineering dragster to a 3.918 at 307.58 with a worthy runner-up effort.

“It never gets boring,” Brown said. “It’s more than just a trophy, it’s all the hard work it takes to get here. We struggled the first three races but we just kept digging, we kept our heads down and just kept going.”

With the win, Brown moves to second in the Top Fuel points standings, trailing leader Brittany Force. Force lost to Buff in round two.

Brown defeated Leah Pritchett and Dave Connolly before facing off against Buff, who defeated JR Todd in the semis. Brown has 55 career wins in 98 final round appearances, including 39 wins in Top Fuel.

DeJoria piloted her Tequila Patron Toyota Camry to a 3.968 at 315.49 to overtake defending world champion Del Worsham in his DHL Camry. Worsham raced to a 3.988 at 323.58. It is DeJoria’s second win at LVMS, where she also won in 2014, and her fourth Funny Car victory.

“This fourth trophy was definitely a difficult one,” said DeJoria, who had not won in the last 33 races. “It took a lot of risks to get here.

“We made consistent passes down the race track all four runs in qualifying and on race day as well. I don’t know when the last time was that we did that. It’s incredible to be a part of this.”

DeJoria moved to eighth in the Funny Car points. Robert Hight maintained the points lead in his Auto Club Chevy Camaro after losing to DeJoria in the quarterfinals. DeJoria also outran 16-time world champion John Force in the semifinals.

In a battle of Chevrolet Camaros, two-time world champion Jason Line defeated KB Racing teammate Bo Butner in the Pro Stock final after Butner turned on the red light at the start. Line extended his points lead with his second win in his fourth consecutive final round appearance to open the season.

“It’s been special to say the least," said Line, who beat Matt Hartford, Chris McGaha and Erica Enders en route to the final. "It’s been a fun ride. Hopefully it continues like this for the rest of the year.”

It is Line’s 39th career victory and the fourth consecutive victory for the KB Racing team.

Line widens his points lead over teammate Greg Anderson and Butner, who defeated Anderson in the semifinals, sits in third for KB Racing.

NHRA point standings after 4 of 24 events