The next step is simply keeping his 8,000-horsepower Top Fuel dragster on its current path at one of the world’s most state-of-the-art dragstrips.

LAS VEGAS — If Doug Kalitta and his Mac Tools team had mapped out the ideal start to the 2014 NHRA Mello Yello Drag Racing Series, what has transpired over the first three events of the season would be high on the list.

Capping off his three-race hot streak with a victory at the tradition-rich Amalie Motor Oil NHRA Gatornationals in Florida on March 16, Kalitta built on his Top Fuel points lead and continues to be a step ahead of nearly everyone in the loaded class. He heads into the 15th annual SummitRacing.com NHRA Nationals at The Strip at Las Vegas Motor Speedway this weekend with an impressive amount of momentum and a three-race stretch that includes two No. 1 qualifying positions, two final round appearances and one victory. 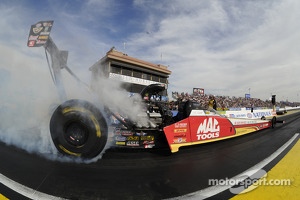 The next step is simply keeping his 8,000-horsepower Top Fuel dragster on its current path at one of the world’s most state-of-the-art dragstrips, which will host the fourth of 24 NHRA Mello Yello Drag Racing Series events in the 2014 season.

“Getting the Gatornationals win was definitely a great boost for me and all my guys on the Mac Tools team, especially after the great start we have had this year,” Kalitta said. “We’re really excited about the way we’ve started 2014. As a driver, it’s a big boost to your confidence to know that you have such a great race car underneath you. We’re eager to see what this season will hold for us from here on out.”

Tony Schumacher (Top Fuel), Cruz Pedregon (Funny Car), and Allen Johnson (Pro Stock) were 2013 winners at the event that will once again be televised on ESPN2.

After finishing third in points a year ago, Kalitta again has his sights set on his first Top Fuel world championship. A strong finish to his 2013 season, which included a win and two final rounds in the Countdown to the Championship, carried over to 2014 where Kalitta has appeared almost flawless at times.

Those good vibes have carried over to Kalitta’s car as well. In earning his 34th career victory by knocking off 2012 world champion Antron Brown in the finals at Gainesville, which ties him for sixth all-time in Top Fuel victories, Kalitta only furthered his team’s hot start. As for keys, Kalitta said being prepared and laying down a good qualifying number has been important.

“It seems like qualifying well is a big advantage to starting race day off well, so we will be looking to continue more of that (in Vegas),” said Kalitta, who has finished second in Top Fuel points three different times during his career. “We have great support among all four of our teams and that is invaluable. Jim (Oberhofer, crew chief), Troy (Fasching, assistant crew chief) and the entire Mac Tools team have been tremendous. They give me a great race car to drive. It’s a great feeling.”

By going rounds, Kalitta has also made the most of this early-season opportunity. Continuing to do so at the SummitRacing.com NHRA Nationals is certainly the goal, but nothing will come easy in a field hungry to close the gap. That includes Schumacher, who has seven career wins in Vegas, Brown, who is back in championship form, and defending world champion Shawn Langdon. Other contenders include Khalid alBalooshi, who won the Winternationals to start 2014, two-time Vegas winner Spencer Massey and rookie Richie Crampton.

For now everyone is chasing Kalitta, whose early-season hot streak would only get more remarkable if he won in Vegas for the first time since 2001.

“It’s hard to believe it’s been 10 years since we won that first one,” Kalitta said. “My guys and I are all hungry hunters so it should be fun going after another Vegas trophy. Even though the Vegas facility is one of best we race at, there is always a big temperature change throughout the day that seems to keep the crew chiefs busy.”

In Funny Car, legendary John Force is coming off his 16th world championship in Funny Car and is the current points leader in the class and has four wins in Vegas. His JFR racing teammate, Robert Hight, is once again a bona fide championship contender and is coming off a win in Gainesville. Hight also has four Vegas wins, including three at the SummitRacing.com NHRA Nationals. Ron Capps has a Funny Car-best five wins at The Strip while Alexis DeJoria defeated Hight in Phoenix to earn her first career victory. Other marquee challengers include defending race winner Pedregon, who has three Vegas wins, Courtney Force, Jack Beckman, Del Worsham, Tommy Johnson Jr., Bob Tasca III and Tony Pedregon in what has developed into one of the most competitive Funny Car fields in history.

In Pro Stock, the reigning champion is Jeg Coughlin Jr., while his Mopar Dodge Dart teammate Allen Johnson is the defending winner and has posted back-to-back victories in 2014 to take over the points lead. Winternationals winner and one-time Las Vegas winner Jason Line and his Summit Racing Equipment Chevy Camaro are after another early-season victory and his teammate, Jimmy Alund, who is filling in for Greg Anderson, is also expected to challenge for the win. Erica Enders-Stevens, V Gaines, Shane Gray, Vincent Nobile and Dave Connolly always provide tough competition in the ultra-competitive factory hot rod category.

The SummitRacing.com NHRA Nationals is always a big weekend for Pro Stock drivers as the lucrative K&N Horsepower Challenge will showcase the 200 mph factory hot rod category. Eight Pro Stock drivers will duke it out for bragging rights and a hefty $50,000 paycheck on Saturday of race weekend. Allen Johnson is the defending K&N Horsepower Challenge winner.

As always, fans will have the opportunity to interact with their favorite drivers as they’re granted an exclusive pit pass to the most powerful and sensory-filled motorsports attraction on the planet. This unique opportunity in motorsports gives fans direct access to the teams, allowing them to see firsthand the highly-skilled mechanics service their hot rods between rounds, and enjoy some cherished face time with their favorite NHRA drivers.

On Thursday, March 13, NHRA will host a Fanfest at the New York-New York Hotel and Casino (5-7 p.m.). The NHRA Fanfest will give fans an opportunity to meet and greet drivers, get autographs, check out some show cars, take photos with their favorite drivers and more before the drivers go full throttle at LVMS.

Tasca heads to Nationals in Las Vegas 5th in points