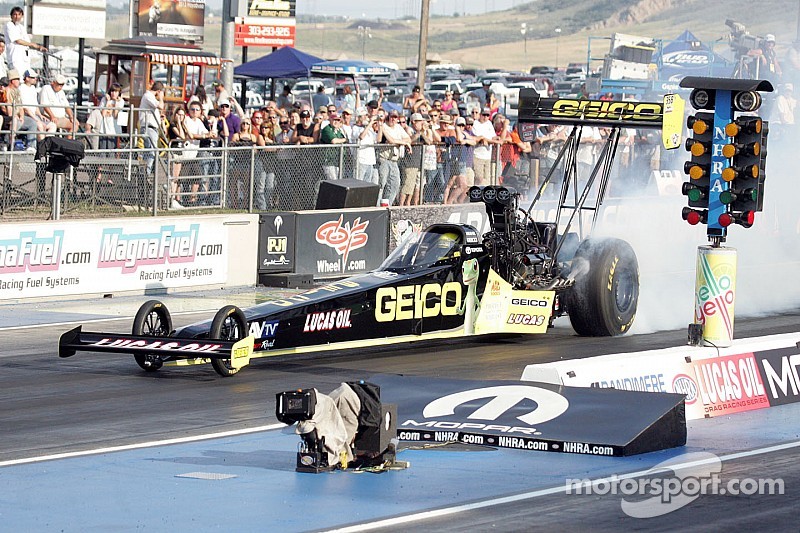 The Australian has already piloted his dragster at Brainerd to one win in his first Top Fuel season.

Having the Lucas Oil name attached to the NHRA Mello Yello Drag Racing Series event makes the race a big deal for Crampton, who has already piloted his GEICO/Lucas Oil dragster to one win in his first Top Fuel season. The incentive to do well is certainly there for Crampton for that reason, but also to enter the Mello Yello Countdown to the Championship on a good note.

Currently sitting ninth in points, Crampton couldn’t come up with a better scenario to enter the upcoming Chevrolet Performance U.S. Nationals and the Countdown than a victory this weekend in Brainerd.

We figure if we run well enough, the numbers will take care of themselves,

“It's a hometown feel for everyone at Morgan Lucas Racing,” Crampton said. “Brainerd is a pretty special event for Lucas Oil and the Lucas family, and we always have a great time. It’s a big event to do well at and build some momentum for the Countdown. We just need to stay consistent and do well every run so we can gather all the information we can for Sunday. The way (crew chief) Aaron Brooks has the car running right now, it's fun to go to every race.”

Spencer Massey (Top Fuel), Ron Capps (Funny Car) and Mike Edwards (Pro Stock) were last year’s winners of the event that will once again be televised nationally on ESPN2. The race also serves as the 17th of 24 races during the 2014 season and is the penultimate stop in the regular season.

Crampton, who picked up his first career victory earlier at Englishtown, is one of the frontrunners for the Auto Club Road to the Future Award that goes to NHRA’s Rookie of the Year, but at the moment he is more concerned with getting ready for his first championship chase.

That starts with doing well in Brainerd coming off the heels of his first NHRA Western Swing where Crampton earned round victories at each of the three races, including a semifinal appearance in Sonoma.

“Our GEICO team did a fantastic job on the Western Swing,” Crampton said. “The car strung together five good runs in a row in Seattle. I'd like to continue down that path of consistency and making run after run and having good information to fall back on for race day. Aaron and the GEICO team are doing the right things and things are looking like they are starting to fall into place for the last part of the season.”

That gives Crampton confidence that he can compete against anyone in the loaded Top Fuel field that is headed by points leader Doug Kalitta, who won the most recent event in Seattle.

Crampton is also within striking distance of several drivers in front of him, but his focus remains on his own performance.

“We figure if we run well enough, the numbers will take care of themselves,” Crampton said. “We're just focused on stringing together a lot of consistent runs, like we did in Seattle, and trying to go rounds on race day. We can only control what we do with our race car, and not what's going on around us with the other cars in the top 10. If we can get our car running like we know it can, we'll make our way up a little higher in the top 10 for the beginning of the Countdown.”

As far as the pressure that comes along with a championship chase in Top Fuel, Crampton is ready for that. The rookie jitters are long gone and with a talented and experienced team surrounding him, Crampton is more than prepared for a successful stretch run in his debut season.

“The mindset of being a rookie going into races went away quite some time ago for me,” Crampton said. “I'm excited to get to each new race, do well, try to compete and go win rounds. I think I'm in a good place and am really excited to finish out the year well and finish in a good position in the top 10 in my rookie year.”

In Funny Car, Capps took home the victory in Brainerd a year ago, marking his fourth win at the track. But no one owns Brainerd like 16-time and reigning world champion John Force, who has 11 wins at the facility and won the most recent event in Seattle. Both will be challenged from an ultra-competitive Funny Car class that also features Tommy Johnson Jr., points leader Robert Hight, 1992 Brainerd winner Cruz Pedregon, Matt Hagan, Sonoma winner Courtney Force, Tim Wilkerson, Del Worsham and two-time season winner Alexis DeJoria.