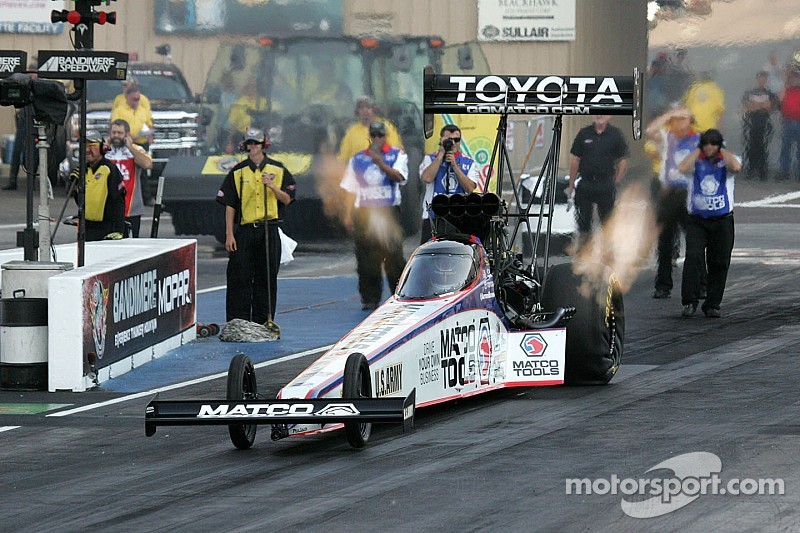 Brown has a strong handle on what it takes to stand in the winner’s circle during the biggest weekend of the year.

INDIANAPOLIS – Antron Brown considers himself fortunate to have won the world’s most prestigious drag race, the Chevrolet Performance U.S. Nationals. A three-time winner, including a Top Fuel victory in 2011, Brown also has a strong handle on what it takes to stand in the winner’s circle during the biggest weekend of the year.

But that doesn’t mean there is anything easy about succeeding at an event that has featured some of the most memorable moments in NHRA history.

“It’s survival of the fittest,” said Brown, driver of the 10,000-horsepower Matco Tools dragster. “You know you can’t make a mistake because everyone is bringing their best. Everything is so crucial and nobody is guaranteed a spot at Indy. There’s a lot of strategy involved and you just have to make a lot of good runs. You have to be like a surgeon and it definitely takes a lot of precision over the entire weekend. At Indy, everybody brings their ‘A’ game and brings all their best parts. That’s what Indy brings out and that’s what makes it special.”

What gets you excited is just the prestige,

As many as 1,000 competitors in 12 different categories will attempt to put their names in the Chevrolet Performance U.S. Nationals rich history book over Labor Day weekend. It also marks the 18th of 24 events during the 2014 season and is the final race of the regular season. The Traxxas Shootout will also take place in Funny Car and Top Fuel at the Chevrolet Performance U.S. Nationals, giving drivers, including Brown, a chance to race for $100,000 bonuses.

“What gets you excited is just the prestige,” Brown said. “It’s how deep of a field it always is, the history behind it and just the excitement surrounding the event. With the Traxxas Shootout and then the race, it’s just a big, historical weekend. You know whoever wins is ‘the’ team.”

Brown has solidified his spot as a part of the rich tradition of the Chevrolet Performance U.S. Nationals, winning the race and the Pro Stock Motorcycle bonus event in 2000, winning in PSM again in 2004 and in Top Fuel in 2011. After watching Langdon, the 2013 world champion, double-up with Chevrolet Performance U.S. Nationals and Traxxas Shootout victories last season, Brown is after that goal in 2014.

Currently second in Mello Yello Series points behind Doug Kalitta, Brown has been strong all season, winning five races and advancing to seven final rounds. But there is certainly something extra about winning the Chevrolet Performance U.S. Nationals.

“It’s one of those deals where winning at Indy always sticks out,” Brown said. “You know when it happened, how it happened, who you beat and what it took to get there. Looking at things this year, we know what we have to do to succeed and we will have a good game plan heading into it. We’re Countdown-minded right now and we want to run the best we can every time.”

The pressure that comes with the biggest racing weekend of the year is the perfect primer for the Mello Yello Countdown to the Championship playoffs, and it’s an atmosphere that has brought out the best in Brown in 2014.

“We’re all geared up, hyped up and feeling good about what is going on,” Brown said. “The class is at an all-time high and a lot of people are on point. It’s ridiculous how strong everyone is. If you win you know it’s something special and if it’s Indy, it’s even bigger.”

It’s ridiculous how strong everyone is. If you win you know it’s something special and if it’s Indy, it’s even bigger.

NHRA will also conduct official presentations to honor six of the most iconic moments in the history of the Chevrolet Performance U.S. Nationals in the Hot Rod Junction Friday-Sunday of the weekend. On Sunday of race weekend “Big Daddy” Don Garlits will reenact his famous beard shaving scene that followed his triumphant 1967 victory and the “Indy’s Winningest Drivers” presentation, a ceremony honoring Schumacher, Bob Glidden and Garlits, will take place; on Saturday Kenny Bernstein will be honored for becoming the first double-up winner at Indy, Shirley Muldowney will look back at her Indy memories including her 1982 victory, one she called the greatest victory of her outstanding Top Fuel career, and the 1978 Funny Car final where Tom “The Mongoose” McEwen defeated Don “The Snake” Prudhomme will be remembered; on Friday the harrowing 1970 Top Fuel final between Jim Nicoll and Prudhomme will be revisited.

A special Monday edition of the SealMaster NHRA Track Walk will take place prior to final eliminations, where legends Prudhomme, McEwen and Linda Vaughn will walk alongside fans down the historic dragstrip. Fan-favorite Cacklefests and vintage racecars on display in the Hot Rod Junction, along with several autograph sessions featuring the legends of the sport as well as today’s biggest stars will be featured throughout each day of the event. On Friday, a special fireworks show will close out the day’s racing.