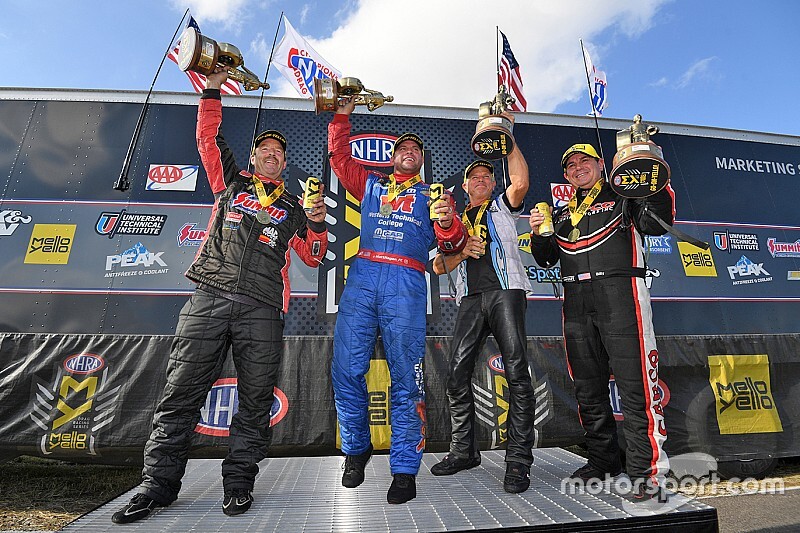 Torrence claimed his second victory in the playoffs, going 3.775-seconds at 319.67 mph in his Capco Contractors dragster to beat first-time finalist Jordan Vandergriff in the final round. Torrence, whose son Steve is the points leader and defending world champ, earned his fourth victory this season and fifth in his career, winning for the first time at his home track. He pulled to within 71 points of his son, who lost in the opening round on Sunday, picking up wins against Terry McMillen, Shawn Reed and No. 1 qualifier Brittany Force to reach the final round. Vandergriff was quicker off the line, but hazed the tires and Torrence chased him down for the biggest win in his career, also giving the Torrence family their third straight win in the playoffs and second consecutive in Dallas.

“It’s home turf and we love to race here,” said B. Torrence, who is now fourth in points. “We’ve raced here our whole career and we have a lot of fans here. There’s no better place to race than Dallas, Texas, and we did have the best car today. It has been very humbling, and we’ve been very blessed and fortunate to have the success we’ve had.

“We’ve got a great group of guys on both cars and our success is just a testament to the work these guys do. I think that we’re probably the second-best car in the country, with Steve having the best. We’ve had a stellar season.”

Torrence stayed in the points lead, leaving Dallas with a 33-point advantage over Doug Kalitta.

Hagan earned his third win of 2019, going 3.909 at 327.59 in the final round in his Western Technical College/MOPAR CAP Dodge SRT Hellcat to beat Bob Tasca’s 3.928 at 323.12. It is Hagan’s 32nd career win and third at Texas Motorplex. He knocked off Blake Alexander, defending world champ J.R. Todd and points leader Robert Hight en route to the win. Hagan also moved to fourth in points in the loaded class.

“We had a great racecar today,” Hagan said. “Qualifying was pretty tough, but to turn on four win lights was pretty huge. Bob is a great driver and those guys are good, so I’m glad things turned out the way they did. We’re just trying to keep some momentum going, keep doing our job and control what we can control. It was a pretty special weekend. We’ve just got to keep digging and keep working. I love this sport and it’s been a big part of my life for 10 years. I knew [crew chief] Dickie Venables was tuned in and you could see he was confident, and that builds confidence in me.”

Tasca beat Jonnie Lindberg, Jack Beckman and No. 1 qualifier John Force to reach his 16th career final round. Hight maintained the points lead in the class, with Jack Beckman the nearest competitor at 70 points back with two races left.

Anderson beat longtime rival Jeg Coughlin Jr. in the final round, going 6.609 at 209.75 in his Summit Racing Equipment Chevrolet Camaro to slip past Coughlin’s 6.610 at 207.56. It gives the veteran three wins this year, 94 overall and five at Texas Motorplex, tying him with Warren Johnson for the most in class history at the facility. Anderson reached the finals with wins against teammate Jason Line, points leader Erica Enders and Deric Kramer, meeting Coughlin for the 102nd time overall and 21st time in the final round.

“We’ve had so many titanic clashes with so much on the line, and I knew it would be close,” said Anderson, who is seventh in points. “It’s a total team effort and that’s what it takes to win a national event in Pro Stock right now. You’ve got to have perfection every time out there. We made a lot of changes this week and we hit on it. It showed it on Saturday and I knew coming into today we had a chance. Now it’s a matter of if I can drive the car well enough. I can’t tell you who’s going to win this thing because everybody right now can beat everybody else.”

Coughlin, who is now third in points, qualified No. 1 and beat Richie Stevens, Aaron Stanfield and Matt Hartford to reach the finals for the 109th time in his career. Enders stayed in the points lead, but saw it slip to just 28 points over Matt Hartford.

Savoie went 6.881 at 195.90 in the final round on his White Alligator Racing Suzuki to knock off Eddie Krawiec and claim his third win in 2019. It is his 12th career win. Savoie also earned his second win in the Countdown to the Championship, closing to within 94 points of leader Andrew Hines heading into the final two events. Savoie reached his fifth straight final in Dallas with wins against Jianna Salinas, Karen Stoffer and Hines, picking up a key victory against the points leader before knocking off Krawiec in a pivotal final round.

“It was a great day and we knew we had a good bike coming in,” Savoie said. “We said if we held our composure we could win this thing. For the most part, tracks favor certain riders and we’ve been blessed here. It’s a great place and today was great.

“Bottom line, I want a championship just as bad as anybody else, so whoever is in my way I’m going to do everything I can to try and beat them. I felt good and we’ve got a great team. To me, this win gives you more hope and means a lot. This gives you that window of opportunity where you could win a championship again.”

Krawiec reached his 47th final round thanks to wins against Ryan Oehler, No. 1 qualifier Matt Smith and Angelle Sampey. The three-time world champ remains winless in his last 10 final-round appearances dating back to last season. Hines’ points lead also grew to 81 over Stoffer.

Fourth of six rounds in the Countdown to the Championship