Steve Torrence took over the Top Fuel points lead in the Mello Yello Countdown to the Championship with victory, as Robert Hight, Deric Kramer, and Andrew Hines also won in their respective categories in the North Carolina Nationals 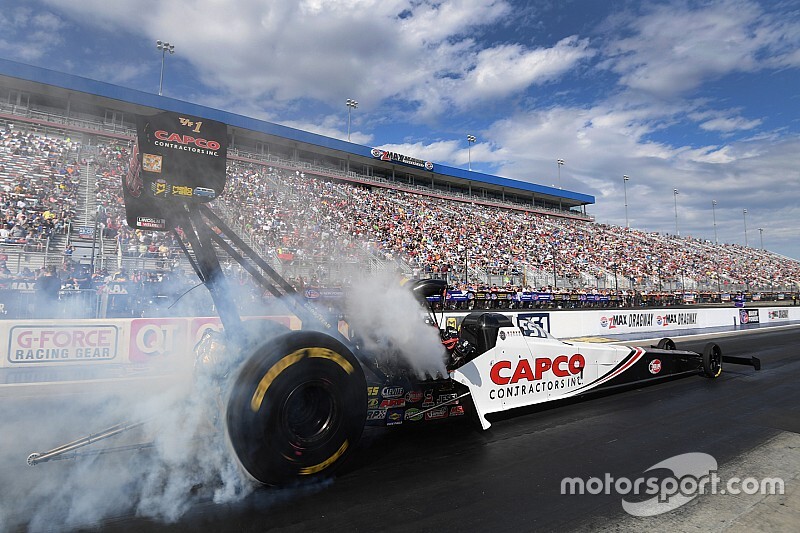 Defending world champion Torrence won this event for the second year in a row with a final round pass of 3.772-seconds at 323.19 mph in his Capco Contractors dragster to beat Doug Kalitta. He also picked up wins against Lex Joon (who did not appear in the first round), Clay Millican and Justin Ashley on the way to his ninth win in 2019 and his 36th win in his Top Fuel career.

Kalitta beat Antron Brown, Leah Pritchett and Brittany Force on his side of the ladder before facing Torrence. The runner-up showing puts him second in the points race.

"To race Doug Kalitta, that guy is a legend," said Torrence. "I look up to him as a driver. So when you go up against him and to have the backlog of what led us to that point, coming in behind him in the points, making up some points in qualifying and then coming all the way down to the final round...

“A few years ago I probably would've gone up there and choked, letting that affect me and get into my head. With the success that we've had, you build confidence in yourself. You trust in the team and the good Lord and you just go do the best you can. I knew that we had a car that could run with him and if I did my job, we could be right there with him on the tree. You can't let what or who is in the other lane influence you and that's what I was able to do today because you've got one of the best ever right there beside you."

John Force Racing’s Robert Hight went 3.917 at 329.02 in his Automobile Club of Southern California Chevrolet Camaro SS to win the final round when Jack Beckman went red at the starting line. This marks Hight's 500th round win, a distinction shared by only 19 other drivers. This win also puts him in the lead in the Countdown to the Championship.

Hight faced Mike McIntire Jr., Tim Wilkerson and Matt Hagan on his way to the final round against Beckman, who got round wins against Dale Creasy, Tommy Johnson Jr. and Ron Capps before meeting Hight in the final round.

“The Auto Club Chevy team really pulled together and did a good job,” said Hight. “We’ve changed some things over the last few races. We’ve been struggling, but we went down the track every run this weekend. Great job to Jimmy Prock and Chris Cunningham (crew chiefs), and all the Auto Club guys.”

In Pro Stock, Kramer went 6.541 at 211.33 in the final round in his American Ethanol Novozymes Chevrolet Camaro to snag his second victory in 2019 and fourth of his career beating Matt Hartford in the final. He reached the final round with wins against Kenny Delco, Jeg Coughlin Jr. and Aaron Stanfield.

Hartford competed in his second consecutive final round after defeating Fernando Cuadra Jr., Chris McGaha and No. 1 qualifier Erica Enders.

“Our motto around the pit is, ‘Just don’t screw up. Make them beat you,’” said Kramer. “And that’s what a lot of today was. Nothing was super stellar; nothing was super fast. But I was able to hold on just long enough and got to 1320 [feet] first and that’s all she wrote.”

Hines picked up his eighth Pro Stock Motorcycle win of the season in his Harley-Davidson when his pass of 6.805 at 199.37 defeated Karen Stoffer in the final round. He secured wins against Michael Ray, Scott Pollacheck and Hector Arana Jr. before facing Karen Stoffer in the finals for the second consecutive time this season. Stoffer took the victory when they met in St. Louis in September.

Stoffer raced to her third final round of the season after defeating Kelly Clontz, Eddie Krawiec and No. 1 qualifier Steve Johnson.

“It was a tough day,” said Hines. “We were sitting around during the rain delay yesterday talking about this Pro Stock Motorcycle class and how stacked it is right now. If you look at the top ten in qualifying, any one of those people could be number one at any given time. You just never know when that’s going to happen, so these races right now are hard fought and hard earned.”

(the third of six Countdown rounds)