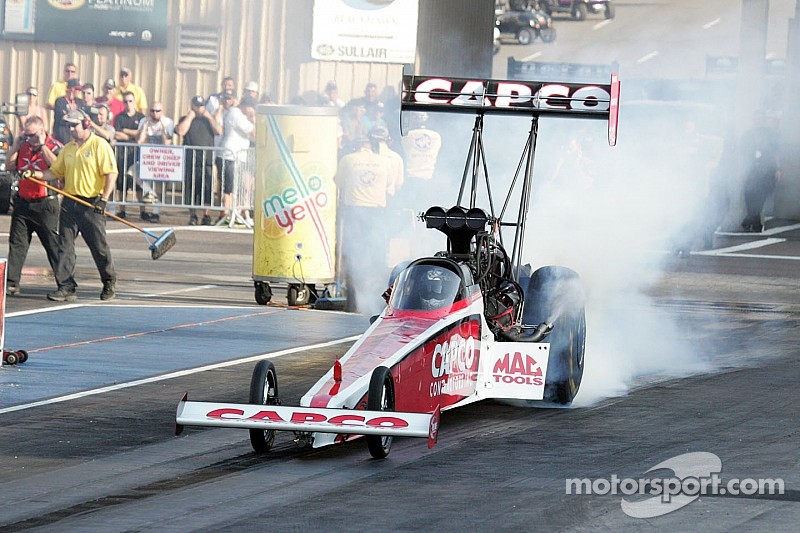 With the start of this week’s 60th annual Chevrolet Performance U.S. Nationals at Lucas Oil Raceway, Steve Torrence will have gone one full calendar year without taking his Capco Contractors Top Fuel dragster to a final round in the NHRA’s Mello Yello Drag Racing Series.

If that was a test, the 31-year-old Texan aced it.

Torrence not only survived a series of frustrations that likely would have devastated most others, he actually enhanced his reputation as a one of the elite performers in the sport’s ultimate class.

Without a win or a runner-up to show for his efforts, the avid hunter and outdoorsman rolls into Indy for drag racing’s biggest event in fifth place in Mello Yello points.  He is the only driver without at least one final round appearance to make the starting lineup in the NHRA’s Countdown to the Championship.

Furthermore, the fact that the tour moves this week to a racetrack on which he has had previous success and that he’ll be racing with his dad, Billy, provides a boost in confidence that he hopes to parlay into his fifth career Top Fuel victory.

After overcoming Hodgkins lymphoma as a teenager, surviving the current winless streak, his longest as a pro, is child’s play.

“We’ve had some success at Indy,” Torrence said.  “We’ve been runner-up three times in Top Fuel (twice in the Traxxas Nitro Shootout and once in the Labor Day classic) and we won here the year we won the (Top Alcohol) championship (2005).  Plus, we know we have a bad ass race car.”