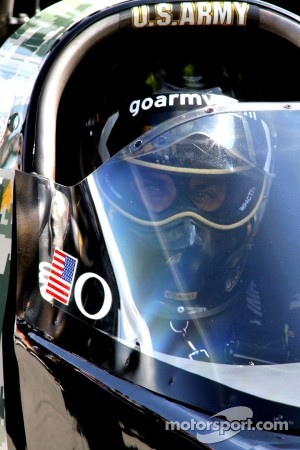 Like the Army Strong Soldiers he draws inspiration from, failure will not be an option for Schumacher as the NHRA Full Throttle Drag Racing Series heads from the thin air of Colorado back down to sea level at the track located just north of San Francisco.

Holding third in the Top Fuel standings, the Chicago-area resident will be looking to rebound from a first-round loss suffered at Bandimere Speedway outside Denver last Sunday. It was his second opening-round loss in three races.

Conversely, Brown will try to remain Army Strong after posting his third win of the season at the Mopar Mile-High NHRA Nationals. After beating Brandon Bernstein in a close final, the New Jersey native pocketed his 18th career Top Fuel victory and moved into second place in the points behind his Don Schumacher Racing teammate Spencer Massey.

With the win at Bandimere Speedway, Brown also positioned himself for a second “Western Swing” sweep in four years. He’s already one of five Top Fuel drivers to have swept the three-race tour, which also includes Pacific Raceways outside Seattle. The other drivers are Schumacher, Joe Amato, Larry Dixon and Cory McClenathan.

At Sonoma, the career numbers for Schumacher and Brown are impressive. A seven-time world champion, Schumacher has three poles, two wins and four runner-up finishes to his credit, while Brown checks in with one pole and two victories. Brown’s second win was over Schumacher in the final last season.

Obviously, first-round losses are never easy to deal with. Given last Sunday’s result, what are your thoughts as you prepare to go to Sonoma?

“Well, we have to forget about that race and direct our full attention to this weekend’s race. That’s really all you can do. You can’t change history. That one is over with and you just have to move on. We need to unload a racecar in Sonoma that’s going to kick some butt. And, I believe we’ll do that very thing. We’ve had a rough last few races, so it’s time for the U.S. Army team to get out there and flex some muscles.”

To that end, you have dropped a bit in the standings and now trail Antron by 70 points and Spencer Massey by 81 points. How concerning is that?

“I’m not concerned at all. I know what kind of team we have and I’m keenly aware that everything can change very quickly. Our priority right now is to do well over the next four races leading up to the Countdown to the Championship. If things fall right, we could be leading the points by the time we start the playoffs. That’s our main goal.”

So, do you feel like you’re totally prepared for the upcoming stretch run?

“There’s no question about that. Again, we have Sonoma, Seattle, Brainerd and Indy before we get to those last six races. We’re going to lay it all on the line and go after each of those. We’d love to go into the Countdown on a four-race winning streak.”

In Sonoma, your dragster will feature a special paint scheme recognizing Army Medical. What does that mean to you?

“It means a lot. We want to help get the word out that Army Health Care is always in need of talented health care professionals and can offer young Americans experience and training unmatched in the private sector, as well as access to comprehensive financial and educational assistance.”

While exhausted due to the extreme heat, you still managed to produce some big smiles after the win at Bandimere. How satisfying was it to win on the mountain?

“It was very satisfying because it’s so difficult to race there due to the altitude. I was fortunate that my guys figured it out and gave me a quality racecar. It performed the way it needed to. As a driver, that’s all you can ask for. Now, we get to go back to normal conditions.”

With Sonoma up next, you have to feel pretty good right now given the momentum you have.

“That’s definitely where we’re at. It’s always nice going to the next event coming off a win. But, you can’t start patting yourself on the back, either. We’ll have a big target on our backs and 15 other teams are going to be taking aim at us. We’ll have to stand up and meet the challenge.”

You have moved to within 11 points of the lead. With four races to go before the playoffs, you must feel confident about taking over that top spot.

“Man, we’re not looking beyond Sonoma. We’re just going to take it a race at a time and do the best we can every time out. Hopefully, that effort will be enough to get us there. But, like everyone else, we really want to be at the top after the last race of the year. So, if I have to wait until then, that’s more than fine. You don’t get a big check for leading the points at the start of the Countdown.”

Your teammates, Spencer and Tony, still seem to be your biggest challengers for the world championship. Are you in agreement with that statement?

“Yes, they’re very serious players. But, honestly, you can’t count out anyone once we start the playoffs. The driver who ends up 10th when they reset the points could easily go on a run and grab the title. I think you have to concentrate on handling your own business and not worry about what everyone else is doing. That will definitely be our objective.”

Ron Capps excited to be headed home to Sonoma