Why Tasca's return is good news for all 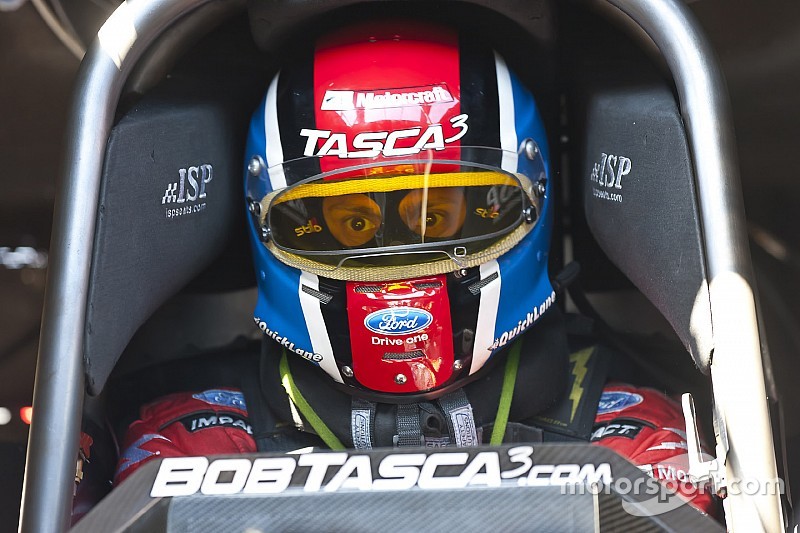 In an environment where fields are growing smaller rather than larger, NHRA and its fans are excited to see the return of a former regular competitor in the Funny Car ranks. Anne Proffit reports.

When Ford Motor Co. decided to halt its support of NHRA’s Mello Yello Drag Racing Series, the move also meant the cessation of competition for Tasca Racing. The Tasca family of Rhode Island have sold and serviced Ford vehicles almost since the brand began and Bob Tasca III led the family’s recent drag racing enterprises with a Ford Shelby Mustang Funny Car, sponsored by Motorcraft/QuickLane, Ford’s parts and service purveyors. He has four Funny Car victories and three appearances in NHRA’s Countdown to the Championship playoffs.

As Ford Racing culminated its association with professional drag racing, that meant an end to the Tasca family’s involvement, although Tasca III, whose namesake grandfather had long been a confidante to the Ford clan, holds a total of four drag racing licenses: Super Comp, Pro Stock, Top Alcohol Funny Car and Funny Car.

Tasca Racing has always billed itself as “A Family Tradition,” and as its professional relationship has always been linked to the Ford family, the absence was felt throughout the Funny Car field, in particular at the Wilkerson Racing camp, as the two teams had a technical partnership and were sharing technology across their two pit spaces.

These types of relationships benefit both partners and, when Tasca Racing departed following the 2014 season, it left Tim Wilkerson on his own as the sole Funny Car racer using Ford Shelby Mustang bodies. Wilkerson races a Shelby Mustang and won his first race of 2016 in Phoenix, the second of 24 contests scheduled this year.

Tasha III rejoins the tour during the 7th annual Four-Wide Nationals, the only race on the calendar that has four cars competing together on the same track. This race is scheduled for April 22-24 at zMax Dragway in Concord, North Carolina. His team also intends to compete at Topeka, Kansas the final weekend of May, in the Epping, New Hampshire contest June 3-5 as well as the Route 66 Nationals at Joliet, Illinois July 7-10.

The Tasca Racing Ford Mustang carries the colors of NewAutoParts.com as primary sponsor for their first race at Charlotte.

“I get emails and see social media posts nonstop asking why Ford pulled out of NHRA Funny Car racing,” Tasca said. “I talk to the executives all the time and, trust me, the Ford family and many people within the company love the NHRA Ford fans.

“I firmly believe that one day they will come back and support their fans and their teams,” Tasca continued. “Until then, the Tasca family will do whatever we can to keep the passion alive for Ford fans.”

His first race back in North Carolina will serve as a rebuilding and starting point, as Tasca III intends to build momentum for the balance of his expected four-race season. “With limited funds it’s hard to find the budget to test. We’re focused on going to Charlotte to get our setup dialed in on Friday and Saturday.”

With his previous recent racing experience, Tasca III has “a lot of data from that track and I feel confident, come Sunday, we will have a car that can compete for the win.” He’ll be helped in that endeavor with backing from BG Products and Nitro Fish. “BG is on-board for all four races as an associate sponsor.” The company is making its NHRA sponsor debut at this track. “We use BG products (driveline chemicals, tools and equipment for dealership service centers) throughout our dealerships.”

Nitro Fish, owned by former Pro Stock competitor Kenny Koretsky, is an apparel manufacturer. “Nitro Fish has helped many racers over the years with funding,” Tasca III explained. “Kenny is a long-time friend and I’m proud to be officially on the Nitro Fish team.”

Bob Tasca III’s team, Tasca Racing was founded in 1962 by his grandfather. Now based near zMax Dragway in Concord, NC. The original Bob Tasca is said to coin the phrase, “Win on Sunday, Sell on Monday.” That statement is alive and well within the Tasca team as it returns to its NHRA Funny Car roots.

Brittany Force: “I’ve been wanting this since Day 1”