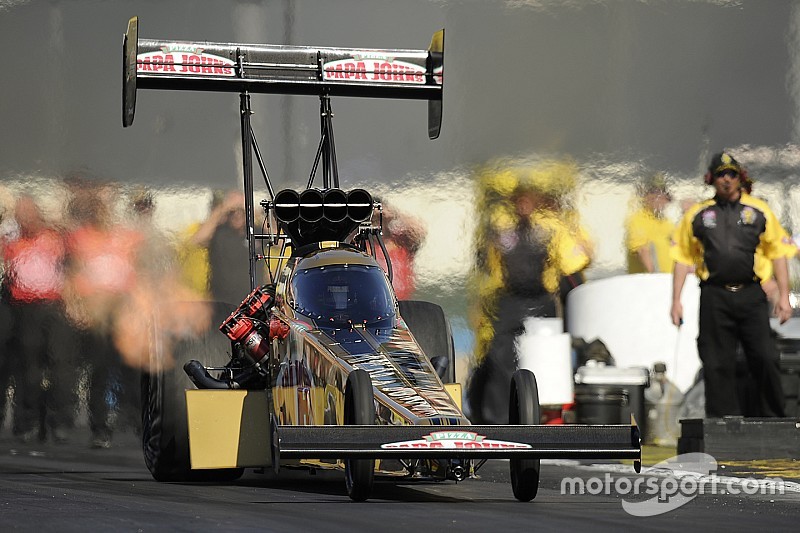 The second NHRA Mello Yello Drag Racing Series event on the 24-race calendar takes place at Wild Horse Pass Motorsports Park near Phoenix, Ariz. As Anne Proffit indicates, the smart money is on those who excelled in a preseason test here.

To further widen that pool of potential contenders, it’s hard to bet against those who were quick on this strip late last month, those who shone in Round 1 at Pomona – and hard to bet against the girls. The thing is, Leah Pritchett fits all those profiles! Pomona fastest qualifier and winner, fastest driver in testing here and defending race winner, she is riding a wave, in her first full year at Don Schumacher Racing in the Papa John’s Pizza dragster.

Last year at Phoenix, Pritchett beat Brittany Force’s John Force Racing’s Monster Energy dragster. At that point Force was still winless, a situation she changed at the following race in Gainesville, Fla. Force then accumulated two further wins and finishing the test in P3 suggests she’ll be one to watch.

Also noteworthy is rookie Troy Coughlin Jr. who currently lies sixth in points after a very studied and professional initial jab at Top Fuel in Pomona. The first-timer with Kalitta Motorsports looked comfortable in his SealMaster rail from burnout to shut-down.

On a more sobering note, there are only 15 entries for Top Fuel, this weekend. The closure of Morgan Lucas Racing is a large part of the problem, but is also symptomatic of the expenses in this class.

Last year’s NHRA Arizona Nationals Funny Car title went to Tim Wilkerson, driving the Levi, Ray & Shoup Ford Shelby Mustang flopper although Pomona winner and two-time champ Matt Hagan is sure to be strong. However, the DSR Dodge driver will also have to contend with Courtney Force, who raced the Virginia cattle farmer hard to the finish in Pomona and whose Advance Auto Parts Chevrolet Camaro SS holds the unofficial track record (3.804 sec) at Phoenix. That superlative time was set during cool Spring Training test conditions, which should be similar to this weekend’s weather.

Nipping at Hagan’s and Force’s heels is the most successful Funny Car driver of all time, John Force, who owns 147 victories and 16 championships. The eight-time winner at this track now has Jimmy Prock back at the tuning helm, ably assisted by Chris Cunningham, and he reached the final here last year before defeat at the hands of Wilkerson.

Pro Stock has a full field of 16 entries for this weekend’s race with Pomona winner and reigning champion Jason Line leading the pack. His teammate Greg Anderson lies second, with part-timer Shane Gray third, Bo Butner fourth, Vincent Nobile fifth and Drew Skillman sixth in the current standings. All of these drivers, along with seventh-placed Chris McGaha drive Camaro racecars; Allen Johnson in eighth with his Marathon Petroleum Dodge Dart is the first upstart in this Chevrolet parade.

In ninth and tenth places are Elite Motorsports’ former class champions Erica Enders and Jeg Coughlin Jr., who are attempting to regain their previous form in quarter-mile racing after a year racing Dodges. The team is rapidly learning the intricacies of its new Camaros and should be victory contenders very soon.

Another rookie worth keeping an eye on at Phoenix is Tanner Gray, son of Shane and grandson of former Funny Car and Pro Stock standout Johnny Gray. The 17-year-old made his debut at Pomona and although he lost in his first round to event winner Jason Line, his deficit was approximately two feet at 211mph. Impressive.

In addition to the three professional classes, there are seven sportsman classes that will take to this quarter-mile dragstrip over the weekend, including fan favorites Top Alcohol Dragster and Funny Car, Super Comp, Super Stock, Top Dragster and the new Top Fuel Harley.

As drag racing speeds are dictated by air density and water grains, the talk about this upcoming race centers around weather. It’s usually not humid in the Valley of the Sun but it can be quite chilly in late winter, which is why a forecast that shows temps in the low 60s for the two qualifying days and high 30s to low 40s at night could result in the super-quick times seen in testing last month. As ever, it’s up to crew chiefs and tuners to adapt and take full advantage.