Will the Countdown conundrums continue in Reading? 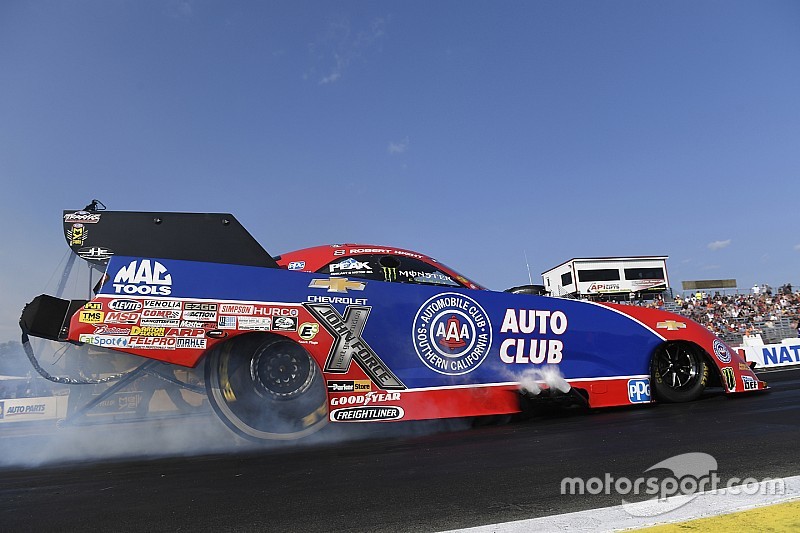 A strange Sunday in Charlotte last week proved again the unpredictability of NHRA drag racing, but Anne Proffit tries to guide us through the favorites for this weekend's second round of the Countdown to the Championship.

NHRA sure knows how to start its Mello Yello Countdown to the Championship, racing three in a row to set the tempo for Top Fuel, Funny Car, Pro Stock and Pro Stock Motorcycle title contenders, as they roll to the 33rd annual Dodge NHRA Nationals in Reading, Penn.

Last weekend’s Carolina Nationals lacked the usual suspects in Victory Lane after Sunday’s four rounds of eliminations. There wasn’t a single Don Schumacher Racing (DSR) entry in either the Top Fuel or Funny Car finals; all three Top Fuel DSR were gone after the second round of racing and the same applied to the squad’s four Funny Car entries. Even seven-race Top Fuel winner (and former championship leader) Steve Torrence was knocked out in the quarterfinals by new Kalitta Motorsports hire Richie Crampton, who ended up going to the finals.

It’s awfully important in racing to grab momentum when it matters, and it certainly appears, from that race anyway, that Kalitta Motorsports have figured out this is the time to get hot. Doug Kalitta, who has been stellar and consistent throughout the 18-race regular season finally found his way to victory at zMax Dragway over Crampton and propelled himself to first in the Top Fuel standings by a scant 14 points, less than one round of racing.

Doug Kalitta’s career is somewhat of a mirror image of last year’s Funny Car champion Ron Capps. The versatile driver has always been in the Top Fuel title hunt but hasn’t been able to close the deal. His team had a reputation for being strong at the start of each NHRA season; this year they’ve come on strong when it matters.

John Force Racing’s Chevrolet Camaro Funny Car racers have been building momentum for this six-race playoffs, too, with Robert Hight battling sister-in-law Courtney Force for the Wally last Sunday. Hight won his third race win of the season and Force, the No. 1 qualifier came up short again. Hight’s victory placed him in first after reigning Funny Car champ Ron Capps’ DSR Dodge Charger R/T (6 wins) fell to JR Todd’s Toyota Camry in the quarterfinals. With her runner-up finish, Courtney Force moved to third in the standings behind Hight and Capps.

The 16-time champ’s youngest daughter is an anomaly in the Funny Car Countdown as only she, Tim Wilkerson and Cruz Pedregon lack Wally winner’s trophies for the season. The latter two are currently ranked ninth and 10th, respectively. There’s a lot to say for consistency in this sport, which is why Tommy Johnson Jr, with a single win in 2017 holds fourth-place points, ahead of DSR teammate Matt Hagan (3), double race-winners Todd and Jack Beckman, and John Force, who started the season in Victory Lane.

Hight, the 2009 FC champion, will this weekend be making his 300th career start, all driven for father-in-law John Force. It’s his consistency, along with the expert tuning of Jimmy Prock and Chris Cunningham, that has kept Hight in the hunt.

“We’ve had a great racecar over the last 15 races, in both hot or cold conditions,” Hight said. “We’ve been collecting a lot of those little bonus points along the way, and I think that’s what you’re going to have to do in this Countdown.

“It’s almost impossible to have six great races, so if you have one bad one but collect a lot of qualifying points, that can make up for a bad race.” Hight won at Reading in 2011.

You know how people say talent skips a generation? Not in the Gray family, where NHRA Pro Stock rookie Tanner Gray, just out of high school, is teaching this class. Earning his fifth victory at his home track, zMax Raceway, to begin the Countdown, Tanner – Johnny’s grandson, Shane’s son, Jonathan’s nephew – rolled the table as No. 1 qualifier, earning maximum points when he beat four-time champ Greg Anderson to the lights in the finals.

The victory leap-frogged Gray to the points lead over Bo Butner of Summit Racing (3 wins), his teammates Anderson (2) and reigning champ Jason Line. Four-race winner and Gray teammate Drew Skillman, Erica Enders (1), Jeg Coughlin Jr, Vincent Nobile, Allen Johnson and Chris McGahal (1), round out the top 10 at this posting. Only Johnson drives a Dodge Dart - and the racer, retiring at season end, received a tribute helmet from Mopar on this Dodge-sponsored weekend. Chevy Camaros dominate the Pro Stock field.

Gray, in his first professional drag racing season, commented: “My team is in the driver’s seat. They have a great handle on the car, our dynamic as a team is on point and we are all having a lot of fun. There is a lot of racing left and this class is so competitive; we have to continue to collect round wins to make a championship possible.”

Has the tide turned in Pro Stock Motorcycle, from the regular season leaders WAR Racing? WAR racer LE Tonglet, who has five wins this season on his Suzuki, knew Vance & Hines would get their new Harley-Davidson Street Rod motorcycles figured out sooner or later. He was hoping for later. Eddie Krawiec won at Charlotte for his second straight and fourth overall (over teammate Andrew Hines), pushing Tonglet back to second in points.

Neither third-ranked Hector Arana Jr (Buell) or Hines have won a race this year, but fifth-placed reigning champ, WAR Racing’s Jerry Savoie has two. The winless balance of the field are Matt Smith (Victory), Scott Pollacheck, Joey Gladstone, Karen Stouffer (all riding Suzuki motorcycles) and Angie Smith on her Buell.

Most likely it’ll take these first three races – Charlotte, Reading this weekend and Gateway next week – to fully set the stage for a title run. With the strength of Kalitta Motorsports, John Force Racing, Gray Racing and Vance & Hines, it would be easy to just lay down the sword and anoint the titleholders. But this is NHRA drag racing and anything probable goes out the window when the Christmas tree alights.

Throw in the prospect of bright, clear, hot weather in this area of Pennsylvania, something that rarely occurs when NHRA is in town, and Reading, normally wet and cool, becomes a wild card for everyone involved. We look to Reading for fast times when fall arrives, but it could be the opposite this week as teams have the full opportunity to figure their setups with the appointed four qualifying sessions.

While there are only 15 Top Fuel cars on the grounds for this weekend’s race, both Funny Car and Pro Stock Motorcycle have 16 entries (no one goes home) and Pro Stock has 17 cars competing for 16 spots. Included in the latter group are returnee Larry Morgan, part-timer Alex Laughlin (a thorn in the sides of both Tanner Gray and Drew Skillman) and Elite Motorsports’ Brian “Lump” Self, more widely known for his mechanical skills than for his competitive driving.

The prospect of unexpected weather patterns, in addition to the possibility of upsetting the status quo with unusual competitors from the norm, could make the 33rd Dodge NHRA Nationals in Reading, PA a race for the ages.