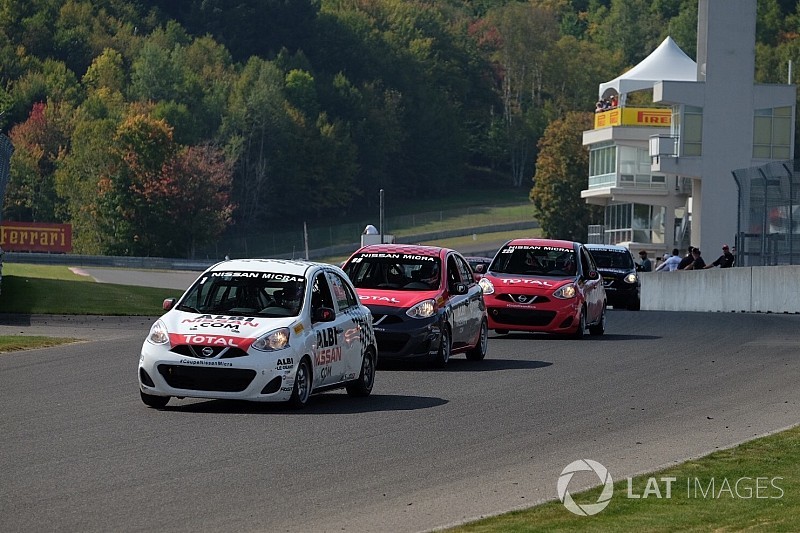 In scorching temperatures, Xavier Coupal wins 12th and final round of the 2017 Nissan Micra Cup on the demanding Mont-Tremblant circuit, North of Montréal.

Title contender Kevin King, who totalled his car yesterday in a scary, high-speed crash that happened during the opening lap of the race, watched the qualifying session from the pit lane.

At the green, Bédard took the lead f the pack with Coupal quickly ahead of Limoges for second place. At the end of Lap 1, the order was Bédard, Coupal, Limoges, Isabelle, Gauthier, Topolnik and Rzadzinski.

Titanic battle out in front

The top three cars ran together, like glued to one each other. Behind them, the order remained unchanged, except for Rzadzinski who was up in sixth place by Lap 6.

Behind them, there was a fantastic battle for eighth place involving six drivers led by Normand Boyer.

On Lap 7, Coupal crossed the line in first place, but Bédard retook the lead a few corners later. On Lap 10, Rzadzinski made it to fourth place, but he was too far back to put pressure on the top three drivers.

“I gave everything I had,” race winner Coupal told Motorsport.com when he exited his car. “The car was understeering unbelievably. It was far from being perfect. I had to keep in Olivier’s [Bédard] draft. At the mid-race point, he passed me for the lead, but I was able to retake the lead soon after. We then pulled away from the rest of the field. I made my move on the last lap. He was fair and didn’t close the door on me.”

Third place Bédard celebrated his second Nissan Micra Cup championship. “It was a tight race,” Bédard said. “I had the advantage, because Coupal could only keep up with me because he was benefitting from my draft. I knew I had the faster car, and I was conserving my tires. I was hoping that Valérie [Limoges] would interfere with our battle. Coupal made a good move on the last lap to pass me. It was a good race.”

In the final drivers’ point standings, Bédard is first and champion, followed by Kevin King and Xavier Coupal.