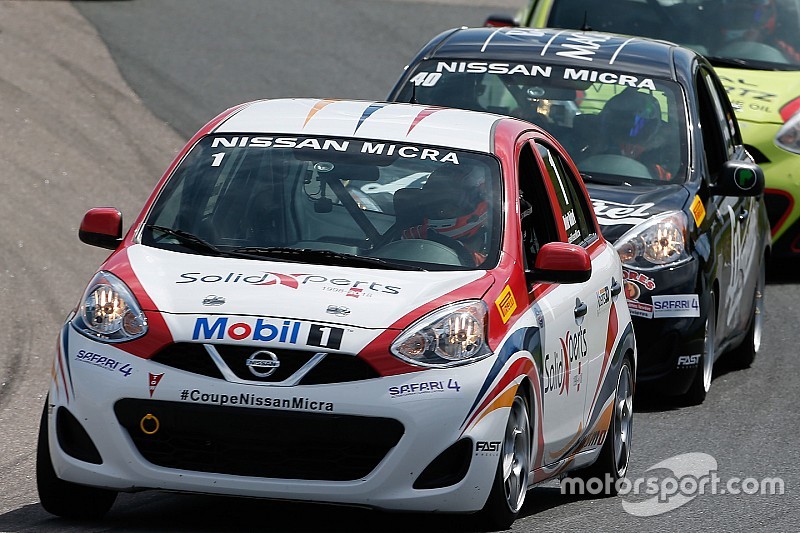 Saturday and Sunday’s races were held on different tracks with each race lasting 40-minutes.

For Round 3, Bédard clinched pole position with a time of 1:24.565 to start the race ahead of Kevin King - who won Round 2 at Canadian Tire Motorsport Park two weeks ago - Normand Boyer and Valérie Limoges.

Austin Riley the 19-year-old who has autism and races under his organization’s team Racing with Autism, delivered the best qualifying session of his career with a sixth place.

Bédard went on to dominate the 40-minute race, claiming his third victory in four races and winning by a comfortable margin of 7.684 seconds. King and Limoges rounded out the podium after Briton Jake Exton, the 2017 Novice champion, was disqualified despite finishing third, for his Micra being under the minimum weight requirement.

On to Round 4 on a longer track

Bédard continue to exert his domination in the Cup by taking pole position for Round 4 held on the long, 5.5km track with a time of 2:34.542. King qualified second ahead of Limoges, Boyer and Exton.

Bédard once again won the second, 15-lap race, chased by Boyer, Limoges and King; the top four competitors only separated by one small second at the end of the race. Not far behind, Austin Riley finished another error-free race to finish in fifth place – the best finish in his Micra Cup career.

Jake Exton completed the top six, ahead of Mourad and Ogren. Frédéric Bernier and Sylvain Ouellet followed to take second and third in the Senior Class.

In the drivers’ championship, Olivier Bédard retains the top spot with 164 points. Kevin King is second with 140 and Normand Boyer lies third while also leading the Senior Class with 110 points. Fadi Mourad tops the Novice drivers and stands sixth overall with 75 points.

The next meeting will be held at the end of July at the Mont-Tremblant circuit in the Québec’s Laurentides.