Finale of the 2017 Nissan Micra Cup at Mont-Tremblant 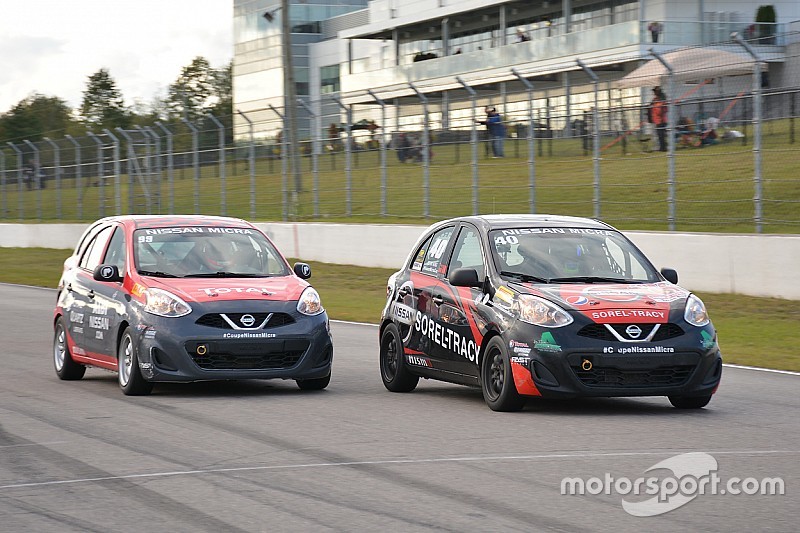 The conclusion of the 2017 season of the Nissan Micra Cup will held this weekend during the Fall Classic at the picturesque Mont-Tremblant Circuit sited in the Québec Laurentians.

The final two rounds of the third season of the Canadian spec series for Nissan Micras will be held this Saturday and Sunday on the 15-turn, 4.26km rollercoaster that was home of the Canadian Formula 1 Grand Prix in 1968 and 1970. This will be Micra Cup's third visit at the Mont-Tremblant Circuit this season.

Three drivers still have a mathematical chance of winning this year’s title. Two young Québec drivers, Olivier Bédard and Kevin King, have the best chances of claiming the championship title. The third man still involved in the battle is the reigning Cup champion, Xavier Coupal, who currently sits in third place, and who will need luck on his side in order to beat King and Bédard.

Driving for Équipe Albi Total, Bédard, the 2015 Cup champion, sits on top of the charts with 342 points while King of team Sorel-Tracy Nissan is second with 315. Coupal, who scored zero points in the last two rounds at Canadian Tire Motorsport Park in Ontario, is third with 265 points. A win is worth 40 points, a second place gives 36 points and a third place, 32.

If Kevin King captures victory in both races, Bédard must at least finish third in one race and fourth in the other in order to claim another championship title.

“My goal is to run at the front of the pack,” King told Motorsport.com. “My teammate Stefan [Gauthier] will be there to help me. The extra points awarded for pole positions and fastest race laps may turn to be crucial at the end. Stefan will certainly give me a draft during the race so I get the fastest lap. Tremblant races are always very strategic, as the long straightaway leads to the final slower corners. You always get a good draft on the straight and it's possible to pass the car ahead of you when you go under the Bridge. You have to play your cards right to be able to win at that track.”

In the Senior category, veteran Normand Boyer only needs one point to clinch the title. Boyer, who’s raced in various categories in Canada since the mid-‘80s, has had a fantastic season so far and lies fifth in the overall drivers’ standings.

The Novice championship is still very much up in the air. Briton Jake Exton took over first place from Nicolas Barrette at the end of the last event, but the gap in points is still fairly tight with Exton in the lead (79 points), former motorcycle racer Vincent Doyle second (70 points) and Nicolas Barrette, now in third place (57 points).

Attend the races for free

Nissan Canada is inviting Nissan Micra drivers to attend the event free-of-charge, where they will be able to take part in the post-championship celebrations on Sunday afternoon, after the completion of the second race. Information can be found here.

Stefan Rzadzinski captures victory in Round 10 at CTMP