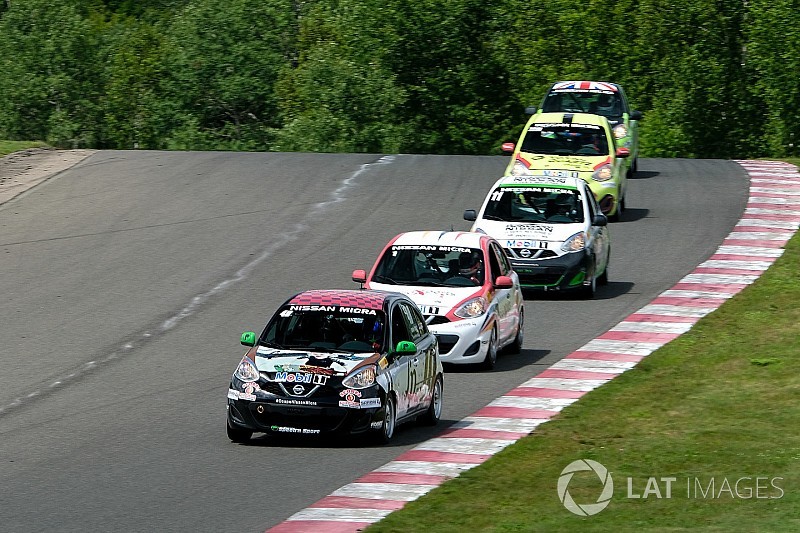 Kevin King today captured victory in Round 6 of the Canadian Nissan Micra Cup at the Mont-Tremblant circuit, north of Montréal.

The first start of the race was dismissed as some cars were out of position. The second attempt worked fine and King immediately jumped into the lead, followed by Bédard, Boyer, Limoges and Exton.

Strangely enough, the position of the top five runners did not change one bit during all 18 laps of the race, but action was intense, nevertheless.

The five-car train circulated at high speed like if the bumpers were glued together, without an inch to spare. Bédard tried his best to pass the leading King, while behind them, Limoges tried every trick in the book to pass Boyer, without success.

Meanwhile, Fadi Mourad was running an exceptional race. The driver of the No. 77 Micra was forced to take the start from a lowly 18th place after he got penalized by passing a competitor under a red flag during the qualifying session. Mourad drove like a man possessed during the race, and made it up to sixth place at the chequered flag.

Kevin King captured his second victory of the season. Bédard finished second ahead of Boyer, Limoges and Exton.

Mourad sixth at the flag, having powered ahead of Mike Ogren, Frédéric Bernier, Nicolas Touchette and Mario Berthiaume.

“It was not an easy race!” race winner Kevin King told Motorsport.com. “It was tough. I had to deal with intense pressure from all my pursuers, especially from [Olivier] Bédard. I had no other choice but to keep calm and make no mistake. And that’s what I did.”

The next two rounds will be presented in two week as part of the prestigious Grand Prix de Trois-Rivières.