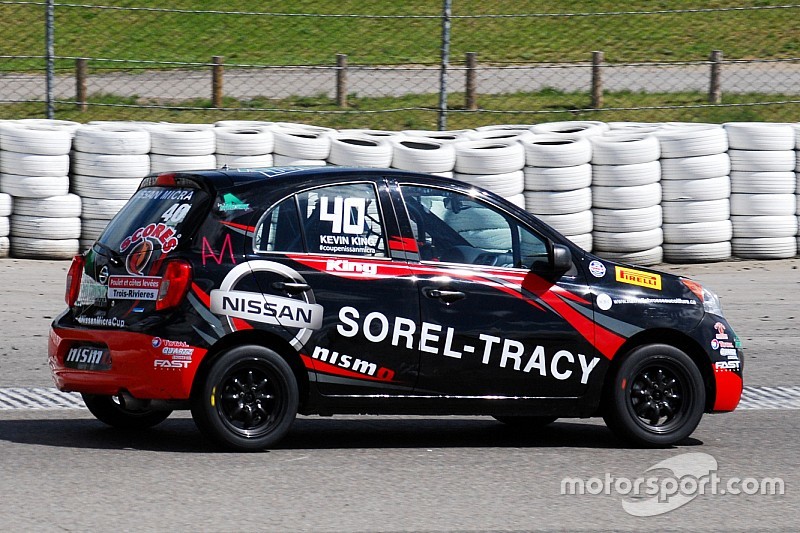 Kevin King clinched victory in Round 9 of the Canadian Nissan Micra Cup at Canadian Tire Motorsport Park held during the NASCAR Truck meeting.

Driving his No. 1 Micra, Xavier Coupal captured pole position with a time of 1:43.118 ahead of Stefan Gauthier (No. 96), Kevin King (No. 40), Stefan Rzadzinski (No. 69), Jean-Michel Isabelle (No. 86), Olivier Bédard (surprisingly down the field in his No. 99 Micra), Jesse Lazare (usually the driver of the No. 69 MIA McLaren in IMSA, but driving the No. 21 Micra this weekend) and Valerie Limoges (who did not have a good qualifying effort in his No. 220 Nissan).

The field got the green and moments later, the officials called a full course yellow. When the field got by the front straightaway, Coupal’s car went missing and Gauthier appeared in the lead. What happened was that some shoving and pushing happened when the cars arrived in Corner 2, and Coupal’s Micra suddenly went backwards at high speed into the concrete wall. The rear end of the car got badly damaged in the accident.

Then, Lazare lost positions in favour of Jean-Michel Isabelle, who was now up in third place. Meanwhile, Bédard was making good progress and was up in fourth place by Lap 7. The top four cars were now running together without an inch to spare.

On Lap 9, Bédard was up in third place while Isabelle drove straight into the pit lane. One lap later, the order was King, Gauthier, Bédard, Rzadzinski, Marc-Antoine Cardin (No. 4) and Lazare.

On Lap 12, Bédard passed Gauthier to make it to second place. The top three cars together, and mistakes were not allowed.

At the conclusion of the last lap, the three top drivers played bumper cars between Corners 9 and 10, but they luckily all kept their cars pointing in the right direction.

King crossed the line in first place ahead of Bédard and Gauthier. The second group arrived home a few second later, made of Rzadzinski, Cardin, Lazare and Boyer. Then came Australian Keishi Ayuka (No. 59), Frédéric Bernier (Micra No. 28) and British driver Jake Exton (No. 00).

Round 10 will be staged on Sunday afternoon.

Stefan Rzadzinski captures victory in Round 10 at CTMP