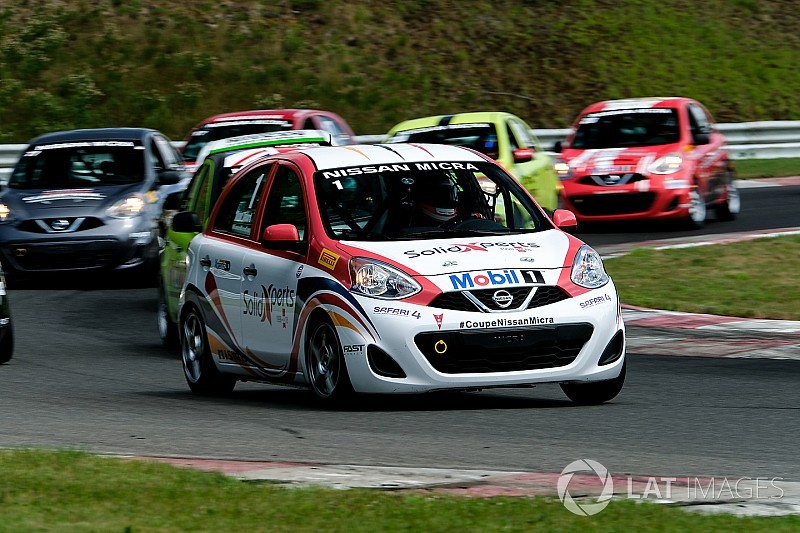 Olivier Bédard captured victory in Round 5 of the Canadian Nissan Micra Cup held on the Mont-Tremblant rollercoaster sited in the Québec Laurentians.

Out of the initial four rounds of the season held in Ontario, two-time Cup champion Olivier Bédard won three of them while his arch rival, Kevin King won one.

It rained hard during lunchtime but the 15-lap, 40-minute race got the green on dry pavement. The race finished under a full course caution, but Bédard managed to lead all laps en route to his fourth win of the season.

“It was a tough race,” Bédard told Motorsport.com. “I admit I was lucky with the full course yellow at the end of the race, but it’s the first time it plays in my favour. It was a hard battle against Kevin King and Jake Exton, and that explains why the gap between us three varied lap after lap. My car lacks a bit of top speed, and we’ll try to fix it for tomorrow’s race.”

Briton Jake Exton finished second, scoring his best finish in the Micra Cup. Exton started the race in fourth place and moved up the field to take second on Lap 4.

Kevin King arrived home in third position. The driver of the No. 40 Micra started third and ran in sixth place until Valérie Limoges, Normand Boyer and Fadi Mourad all got involved in some contacts, resulting in Limoges going off track and damaging her car, and calling for the late race yellow.

Boyer crossed the line in fourth place, but received a 3-place penalty after the race for avoidable contact. ahead of Mike Ogren, Austin Riley (who was penalized for passing the the yellows), Frédéric Bernier, Normand Boyer, Sylvain Ouellet, Nicolas Touchette and Éric Chaput who was contesting his first Micra race ever.

The sixth round of the championship will be presented again on the 4.26-km Mont-Tremblant road course tomorrow, Sunday afternoon.