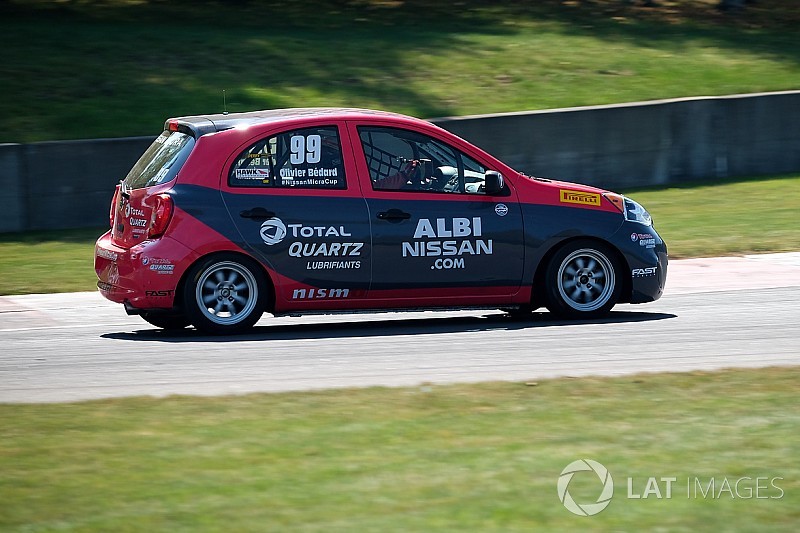 Olivier Bédard today captured the victory in Round 11, the penultimate race of the Canadian Nissan Micra Cup.

The two-race meeting is held at the challenging Mont-Tremblant circuit in the most unusual weather for this region of the Province of Québec in September. Under blue skies, the temperature reached 30 degrees Celcius when it should be around 15 degrees, normally.

His Total Canada teammate, Valérie Limoges, who benefitted from Bédard’s draft during the entire qualifying session, set the second fastest time ahead of Stefan Gauthier, Xavier Coupal, Stefan Rzadzinski, Kevin King (penalized of three positions as a consequence of an incident that took place at the previous meeting at Canadian Tire Motorsport Park), Normand Boyer and Jean-Michel Isabelle. Twenty-four cars participated in the qualifying session.

Three drivers still had a mathematical chance of winning this year’s title: Olivier Bédard, Kevin King and Xavier Coupal. However, Coupal, the reigning champion, did not score points in Round 9 at CTMP as his Micra was totalled in a first-lap crash. He then failed to take the start of Round 10.

Bédard jumped into first place at the green flag with Limoges in tow and Coupal taking the outside line in the daunting Corner 1, passing some rivals. However, chaos happened a few turns later. Kevin King’s car went sideways in the very fast Corner 7. King recovered briefly but his car snapped into the other direction and went straight into the guardrail at a speed of 140 km/h approximately. Other cars got caught in the melee, and were badly damaged. The ambulance was sent onto the location of the crash and the race was red flagged.

“I’m physically okay,” King said when he returned in the paddock. “There was some oil on the tarmac there. I was passing a rival when the car went sideways. I was recovering it when my rear wheel went into the grass. There was nothing I could do.”

The race was stopped for some ten minutes as the badly damaged cars of King, Sylvain Ouellet and Martin Barrette were recovered.

At the restart, Bédard again jumped into the lead with Stefan Gauthier glued to his rear bumper. Moments later, Rzadzinski managed to pass Gauthier for second place. Valérie Limoges was third ahead of Coupal.

Bédard pulled away from Rzadzinski and enjoyed a small cushion over the rest of the pack. The chequered flag was waved on Lap 7, saluting Bédard’s victory.

“I am really happy with this race win, however, I would have liked a straight fight with Kevin [King],” Bédard told Motorsport.com after the race. “I was really looking forward to this race. I was really pumped up. It’s very disappointing that Kevin suffered a crash. My car ran extremely well. We made some changes to it, and it’s now running much better,” said Bédard who is virtually the 2017 champion of the Cup.

The ultimate race of the season will be held here at the Mont-Tremblant circuit tomorrow afternoon, putting an end of Season 3 of the Nissan Micra Cup.

Finale of the 2017 Nissan Micra Cup at Mont-Tremblant