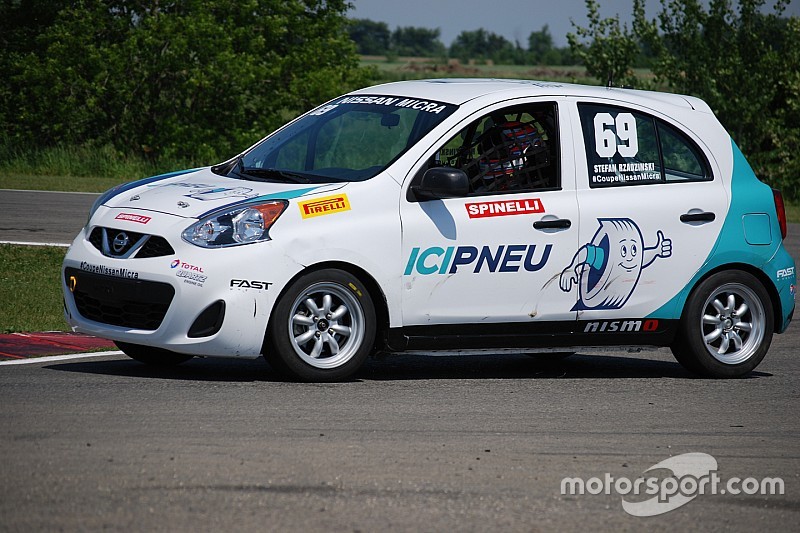 For Albertan Rzadzinski, it was a first win this season in the Canadian series for spec Nissan Micra cars.

Olivier Bédard, the 2015 Micra Cup champion, captured pole position in his No. 99 Micra with an advantage of just 0.163 second over Stefan Rzadzinski (No. 69) and last year’s champion, Xavier Coupal in the No. 1 Nissan. Jean-Michel Isabelle qualified fourth in his No. 86 Micra ahead of Valérie Limoges (No. 220), Kevin King (No. 40) and Jake Exton in the No. 00 car.

Twenty-eight cars lined up on the starting grid, making it the biggest field in the three years history of the series. There was some rain in the morning, but the pavement was mostly dry when the cars completed their formation lap.

At the green, Rzadzinski made a very good start and moved ahead of Bédard at the Porte Duplessis. Jean-Michel Isabelle made it to third ahead of Kevin King and Xavier Coupal. Then, Coupal and King engaged in a furious battle. One lap later, Valérie Limoges joined them, making it a three-car fight. Moments later, King passed Isabelle for third place.

The two leaders enjoyed a five-second lead over a group of five cars glued together (King, Isabelle, Coupal, Limoges and veteran Normand Boyer).

Coupal was breathing down King’s neck, but Kevin was clearly unimpressed. Out in front, Bédard made up ground on Rzadzinski. At the end of the penultimate lap, Coupal tried really hard to pass King, without success and Bédard managed to catch Rzadzinski.

The last lap was extremely exciting with two fantastic battles going on. Rzadzinski crossed the line in front of Bédard, and King won his fight against Coupal. Boyer came in fifth ahead of Isabelle, Stefan Gauthier (No. 96), Limoges, Exton and Marc-Antoine Cardin in his No. 4 Nissan.

Nissan Micra Cup promoter talks about the future of the series