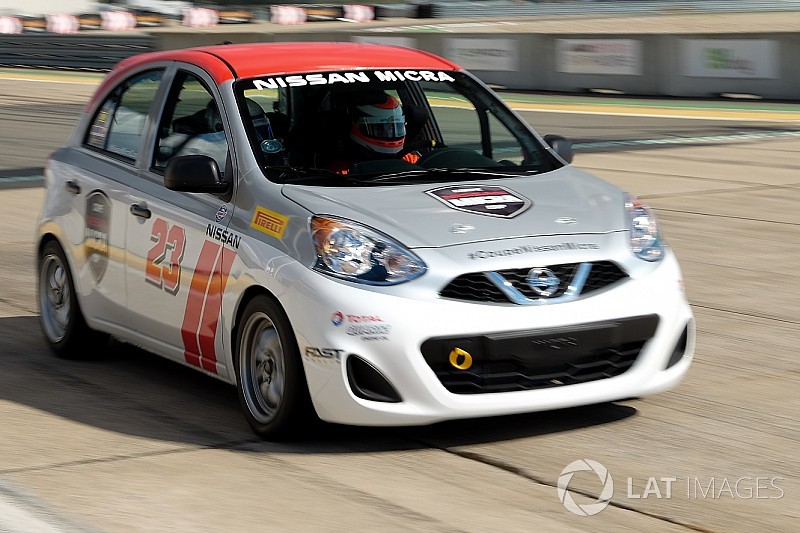 I’ve tested, drove and raced several tin tops and open wheel cars during my career as a journalist. Let’s be perfectly honest, a 109 horsepower race car doesn’t sound super exciting to most. But wait.

Four years ago, a fellow car journalist, Jacques Deshaies, wanted to launch a compact car spec racing series; a concept that’s been hugely popular in Canada since 1976. When Nissan unveiled the Micra in 2014 - which became at less than $10,000 CAN the most affordable street car in Canada - Deshaies found the right vehicle for his series.

After several discussions, Nissan’s Global Motorsport Committee accepted the concept of a spec series for spec Micras in Eastern Canada. MIA (Motorsport In Action near Montréal) built the first car that was thoroughly tested for over 45 hours by NASCAR Pinty’s Series competitor Jean-François Dumoulin.

The series was launched in 2015, and has grown since then. All cars are built by MIA and are sold in turnkey condition. It comes with a racing suspension kit, an FIA-approved racing seat and 5-point harness, a fire extinguisher, a modified exhaust, high-performance brake pads, safety cage, driver protection net, front and rear towing hooks and stylized Fast wheels with Pirelli low profile, slick tires.

Our test car was fitted with an AiM data acquisition system that also serves as dashboard. Today, a race ready Micra is sold for $22,900 CAN, plus taxes. Yep, that’s just $18,300 American dollars.

Nissan Canada, Total Canada and Pirelli support the Micra Cup. This season, the series saw an average starting grid of 25 cars, with a record of 28 at the prestigious Grand Prix of Trois-Rivières. The year is made of 12 rounds held over six meetings at Canadian Tire Motorsport Park, the Mont-Tremblant circuit and Trois-Rivières. Over its three years of existence, the Cup has attracted drivers from Canada, obviously, but also from Thailand, India, United States, Great Britain and Australia.

After some safety instructions, each of us got strapped inside the little Micra for a first lapping session on ICAR’s short track. Like I said before, I drove several race cars in the past, including a few Formula 1 cars, F2000s, F1600s, V8 stock cars and even WRC machines, and I must admit that the little Micra is really fun to drive.

The Pirelli slicks must be brought to their operating temperature before you try to extract the most from the Micra. What’s disconcerting is the power of the brakes and the fact that it does not really handle like a typical front wheel drive car with massive understeering. The Micra Cup car turns in very well, even in the hairpin corners.

It’s also very well balanced and the new stiffer suspension, which drops the car a little bit, does wonders. Body roll is just correct, and the handling remains pretty predictable.

The racing pads provide efficient braking power, as long as you don’t activate the ABS. I realized that I was braking way too early in the corners, and by doing so, not carrying enough speed into the corners. The other key factor for being fast is to limit wheel spin as much as possible, but that’s not easy because it’s a front wheel drive vehicle.

The moment the inside front wheel is unloaded into a corner; it’s very easy to induce wheel spin. I tried lifting my foot off the throttle when it was happened, but that dropped the revs too much. It’s preferable to maintain the wheel spin and to shift to a higher gear.

Carrying speed through the corners

In most corners, second gear is too short (and that induces wheel spin) and third gear is a bit too long (which drops the revs). “That’s why you need to brake less, enter the corner in third gear and carry a lot of speed so the revs don’t drop too low,” said Kevin King. Easier said than done…

Heel-and-toe is extremely easy to execute, the seat is surprisingly comfortable and the gear changes are precise despite the long throw of the lever.

After having run for a second time, King took me for three hot laps in that same car. It’s tough to imagine that such a compact car can be driven as hard as this. Going flat out through the long Corner 2 with all shift lights flashing and the suspension being brutalized was quite entertaining!

What’s most amazing was to realized is that if all Micra Cup cars are tortured every race, they’re almost bullet proof.

“We lost only two engines in three years or 40 races, and that was not because of bad treatment,” Jacques Deshais explained. “We lost an engine when a competitor went off track and hit the tire wall. The engine lost its coolant and seized as the driver desperately tried to get it back to the pits. We lost the other engine when the driver over revved his motor. That’s all.”

Extracting 90% of the full potential of the Micra Cup is not too difficult as long as you have some racing experience under your belt. However, I admit that pushing it full speed with 24 other hot competitors surrounding you on some of Canada’s most challenging road courses is a totally different business…

The official web site of the Micra Cup is www.micracup.com/main.

Canada’s Nissan Micra Cup confirmed until the end of 2020