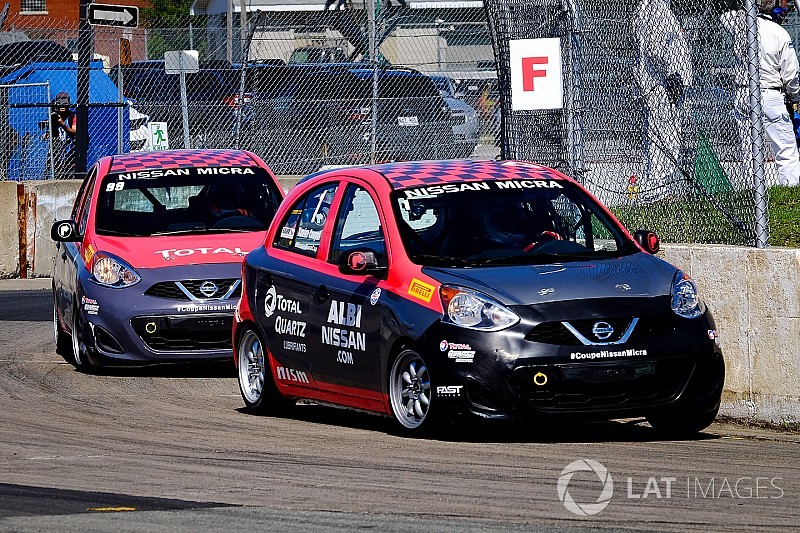 Reigning series’ champion, Xavier Coupal captured victory Sunday morning in Round 8 of the Nissan Micra Cup held on the streets of Trois-Rivières.

For Coupal, it was a very important victory in his quest for a second, consecutive crown.

Olivier Bédard put his No. 99 Micra on pole position, breaking the 1:22 barrier by… one thousand of a second. Bédard set a time of 1:21.999 to beat his archrival, Xavier Coupal (No. 1 Micra) by a little more than two tenths of a second.

The field of 28 identically prepared Micras took the green flag of the 30-minute race under a blue sky and in perfect weather conditions.

With Bédard and Coupal on the front row, everyone knew that getting a good rolling start and turning in Corner 1 in first place would be crucial.

At the green, Coupal powered in front of Bédard while the car of Australian Keishi Ayukai was pushed into a spin and it hit the tire wall. Seconds later, there was a collision involving the cars of Luc Richard and Austin Riley, which require the intervention of the Safety car.

The race was restarted on Lap 3. Coupal remained in control in front of Bédard, followed by Limoges and Rzadzinski. Down the pack, there was drama with plenty of spins and collisions.

The leading two Total Canada cars circuled the track together, setting identical lap times. An exciting battle developed for sixth place, involving no less than seven cars. Method Topolnik was fifth in his No. 78 Micra ahead of Normand Boyer, Stefan Gauthier, Frédéric Bernier and Jake Exton.

Kevin King was forced to retire while Bédard set the fastest lap of the race on Lap 11. The leading duo had a stunning eight-second lead over Valérie Limoges in third position. With a handful of laps to go, Coupal managed to build a one-second advantage over Bédard.

On Lap 14, a car got stuck in the escape road of a corner with oil having been dropped on the tarmac. The incident necessitated the presence of the Safety Car. However, there was just four minutes remaining in the race.

On Lap 16, the Last Lap board was shown, confirming that the race would end under the yellows.

Olivier Bédard now leads the drivers’ point standings with 266. Xavier Coupal is second with 261 and Kevin King is third with 241.