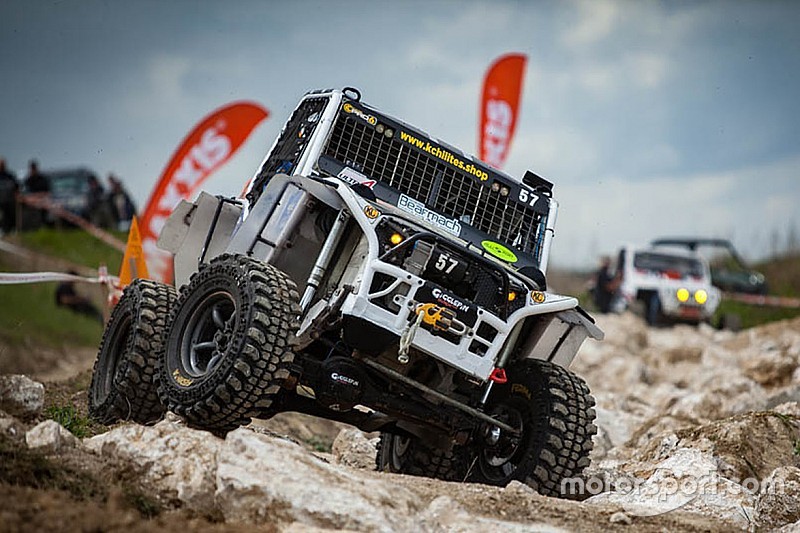 2017 sees the start of the fourth full season of the Ultra4 Europe championship, the international satellite series spawned from the King of the Hammers, which for those who don't already know is indisputably the world's ultimate off-road event.

Round 1 of the championship, which sees events in Wales, Portugal and England is in the rolling hills of north east France about 80 km east of Paris. An incredibly technical short course has been scooped out, piled up and strewn with tons of huge rocks to test the crews who have come from as far away as Holland, Belgium, Portugal and even America to do battle.

The premise of Ultra4 is simple. There are no rules regarding builds. If you can weld it together and drive it then you can race it. Power is unlimited so the top cars have rear-mounted 800 bhp V8s, suspension is straight from the jumps of the Baja 1000 and the 40 inch tyres are designed to crawl over just about anything you steer them at. It's no exaggeration to say that this is the most insane form of off-road racing ever seen.

The short prologue track used to set the running order for the main race on Saturday had a bit of everything. From the flag a 50 metre section of kitchen appliance size rocks lead into a series of hairpins split by fast straights, jumps and a finish of complicated ridges, called whoops, that kicked a few of the cars couple of metres into the air. Getting a good starting position to be ahead in the dust, or if the sky does what it is threatening, the mud, is all-important so the top guys pushed hard. It was the two drivers who have been battling for top honours the last few years who took the top two spots though. Jim Marsden of Gigglepin Racing in his new Land Rover 'style' buggy, who won first time out at last year's King of Britain, kept the momentum going and beat local driver Nicolas Montador by just over four seconds. Montador was always in contention last year but has a brand new truck, much more powerful and a lot lighter, so the Frenchman will be sure to put up a strong fight.

Think you recognise the blue and orange coloured Jeep-faced buggy from somewhere? This was the one raced at the King of the Hammers by the Top Gear team. Now in the hands of Bailey Cole, KoH boss Dave's son took 3rd five seconds ahead of the high-flying Inaki Etila.

In another country while qualifying was taking place was Britain's Rob Butler, the man behind Off Road Armoury, furiously trying to get his new car ready in time. As the evening storm rolled in news was that he was heading to Dover. With a 10 minute penalty for missing the prologue he will be sure to be in the mix on Sunday afternoon.

Tomorrow will see 20 laps of the full course but only a few will make the full distance because as per the norm in Ultra4 Racing it is absolutely brutal. Survivors who manage to make it all the way will then have 20 more to do on the Sunday...