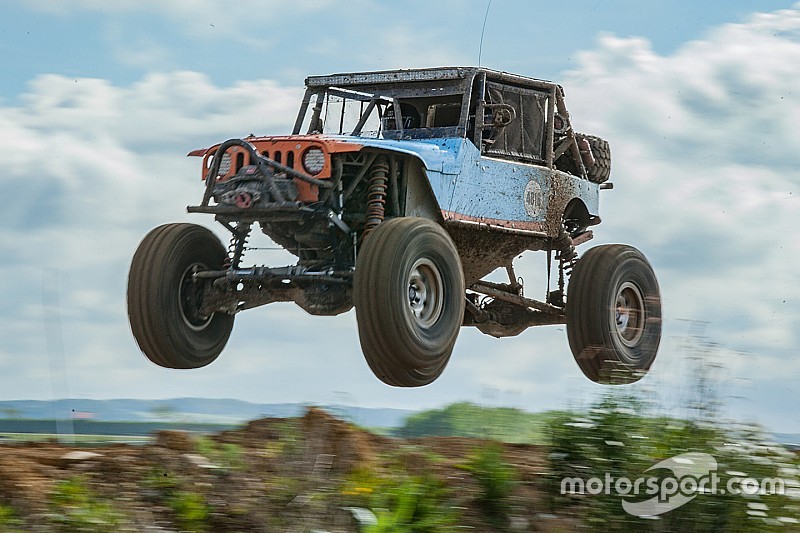 After Saturday's 20 laps there was only 16 minutes covering top three so the 160 km of Race day two at the 2017 Maxxis King of France would decide the winner.

Jim Marsden, with his 13 minute lead over yesterday's second-place finisher Bailey Cole, lead away from the start and just had to keep Cole at arms length for the win… But that plan didn't last a lap as the rear differential gave up and he had to crawl back to the pits for lengthy repairs. The let Cole in the Top Gear Ultra4 car out into the lead but with only a three minute gap to Jorge Araujo from yesterday he couldn't afford to relax.

The American and Portuguese racers ran nose to tail for several laps, with Off-Road Armoury's Rob Butler catching and passing them both by the end of Lap 2, until Cole, taking it a little too easy allowed Araujo through on the long rock section. The Portuguese driver saw his chance and began to push and quickly made up a minutes' lead, but Cole didn't let him get away and upped the pace to keep in touch.

The race was effectively decided when Araujo had trouble with an over-heating engine caused by a belt pulley tensioner and had to stop to make up an amazing bush repair with a big bolt and a jubilee clip to be able to continue. But Cole had opened up another couple of minutes and was firmly in control.

That was the fight for the lead but it wasn't the most spectacular action to watch. Rob Butler was having a glorious test-drive of his new IFS car and got the course record down to 6:59 for the 8 km lap. But he ran out of fuel halfway around one lap and had to bring it back to the pits on tick-over, and also had to have the breather pipe for the power steering fixed… But despite that he still won the day and got the King Shock for fastest lap.

Six laps down after fixing the differential, but still with things floating around inside, Marsden was on a mission. But taking the highest air and being the most sideways around the banked turns wasn't enough to get back to anywhere near the lead and the win that looked odds-on this morning turned into a demonstration drive of what could have been.

Other people's difficulties allowed the safe but steady driving of Jelle Janssen's in his Petronas sponsored car to take third again, as he did last year. No risks, no unnecessary power slides and the second youngest driver (second only to Cole) with his dad in the co-driver's seat took a popular podium.

Recovering from yesterday's wheel falling off drama France's Nicolas Montador brought his new car home in 4th. Winner of the Legends class was last year's victor and 2016 Legends champion Dan Elias in his Wrex Racing Land Rover. His day involved driving as slow as possible to just maintain and control his lead. Last year his victory margin was over four hours, in 2017 it was slightly closer at 10 minutes, but the result is still the same.