With their superb time on yesterday's big 75km stage, taking nearly half an hour off Boros Csaba the Russians went into the final day with a 5 minute advantage, the closest in Croatia Trophy history... and the advantage was with Alexey Golubev. All he had to do was keep Csaba in his sights, and then all the Hungarian could do was pull back 2 minutes. It was set to be an all-out fight in the forests today and there were some nervous faces over the breakfast tables.

The end of the stage came off a hill, through a dried up creek and then did a 180 degree turn in a pool of mud at the checkpoint. A couple of us fished out some salamanders and terrapins and carried them to safety... then waited discussing the different scenarios if Csaba should appear first. The Adventure class cars came down the hill to the finish and the Offroad Wolves team in their Land Rover 90 got home safely to take the win. So although Pro-X's Yuri Selifonov didn't make it three in a row; the cup still stays in Russia. “In Russia the routes are much, much more technical, like one big obstacle,” said co-driver Alexey Shokin when he'd walked back to the checkpoint to wait for his leading team mates. “So in comparison the Croatia Trophy is not that hard for us.” 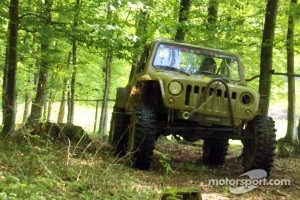 A few minutes later and the air rumbled with the unmistakable thunder of a big, angry V8 and Croatian Boris Gus came bouncing out of the trees. On the tight turn his left front wheel got bogged down and while his co-driver ran out with the winch rope Alexey Golubev came around, nipped inside Gus and the small wall and powered off to the finish. Csaba needed to be 6 minutes in front but in the end he was nearly an hour behind. “Mechanical problem,” I think he said and he showed me the sheared steering box bolt. He looked to the sky and shrugged his big shoulders. But he was still smiling.

Over in Golubev's tent what it took to win was easy to see. But Alexey and his co-driver Imre Poon were fast asleep on their camp beds in the shade. The Russians are quick learners and took the first stages quite easily, not setting the leaderboard on fire like Mr Marsden, but when the win was in their sights they knew exactly what they had to do and they did it. Csaba was their pray and they caught him. Offroad Wolves won both the Trophy and the Adventure class, something that has never been done before.

Now teams are winching their support trucks out of the field and packing away tents. I sincerely apologise for not being able to give detailed positions but with the rather relaxed scoring system they have here it was the best I could do. I'm heading back for the party now and if I have time I'll collect some stories from a few of the popular teams. Finding people with stories to tell in that Croatian field is not that hard!

Ladoga Trophy: A masterpiece in mud

In the deep end at Russia's Pro-X Trophy