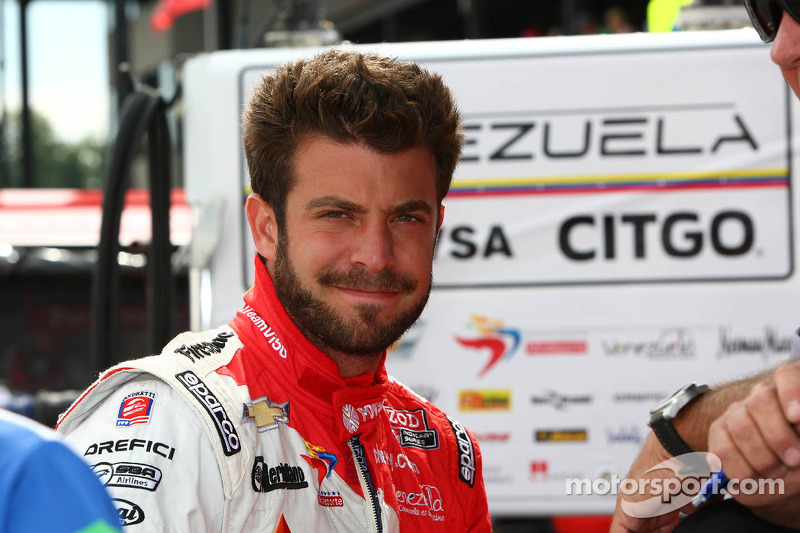 Declared the winner after the race was stopped

Viso, driving the No. 19 Momo/Gridstar-sponsored truck, inherited the lead from teammate Henrique Cisneros in the No. 91 Momo/Gridstar truck after he took the first of two consecutive metal ramps located on the front-stretch of the 2.35-mile street circuit awkwardly. The result was a rough landing which left Cisneros little time to correct his truck before launching off the second ramp. The second landing was even rougher and Cisneros pounded the front-stretch wall with his truck’s right front ending his race.

As Viso continued to lead the nine-truck field, TRAXXAS driver Keegan Kincaid found trouble in a single-truck incident with three laps to go and put him upside down on the backstretch where his truck blocked the racing lane. While Kincaid unbuckled and crawled out of his TRAXXAS truck unhurt even before safety crews arrived, and his truck was able to return to competition, race officials determined the truck could not be righted quickly enough to resume the race.

Viso was declared the winner at that point.

“My friend has been telling me all day that I haven’t stopped smiling,” said Viso, a veteran of five years in the Verizon IndyCar Series. “These trucks are so fun, and after throwing away a win at Long Beach earlier this year it was good to get the first win of the three races this weekend in Detroit. This is going to be a great weekend of racing and I am looking forward to standing on the podium again this weekend.”

Arie Luyendyk Jr. was running second late in the race when he made a bold move on Viso for the race lead. Viso protected his line pinching Luyendyk’s Quicken Loans truck down causing him to lose momentum, allowing Robby Gordon to make a clean pass for second which is where the Orange, Calif. driver finished. Luyendyk finished third with series rookie Aaron Bambach from nearby Rochester Hills, Mich. taking home fourth in the BZ’s Twisted Blend/3deminsional.com TRAXXAS truck. Los Angeles driver Burt Jenner in the Gladiator truck took fifth, Scotty Steele came home sixth. Kincaid was credited with seventh, Cisneros eighth and last week’s winner at Indianapolis Apdaly Lopez finished ninth in the RPM/VisitMexico.com truck after retiring early with a mechanical issue.

The Menards Formula Off-Road Presented by TRAXXAS series will stage two more races, with the rough-and-tumble trucks Saturday on Belle Isle at 2:10 p.m. Sunday’s third race of the weekend will go green at 1:55 p.m. The overall weekend winner will be determined by an average finish from all three races, with any ties broken by the highest finishers in Sunday’s race. Saturday and Sunday’s races can be seen live on the internet at www.stadiumsupertrucks.com. A replay of the Menards TRAXXAS races from Detroit will be shown on NBCSN June 20 at 10:30 p.m. PDT (1:30 a.m. June 21 EDT). The Menards at the Brickyard TRAXXAS races from Indianapolis will be shown on NBCSN June 13 at 9 p.m. (PDT) (midnight EST).