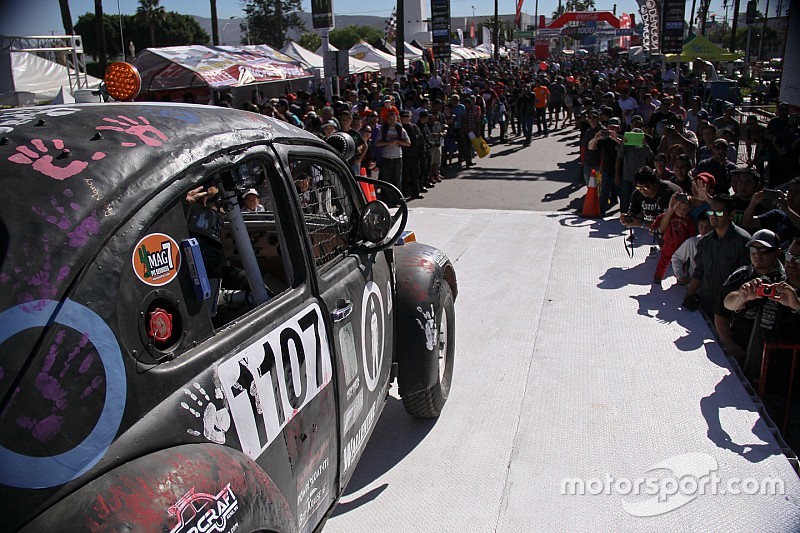 For the world’s off-roading community mid-November in Mexico is the time and place for the one and only Baja 1000, undoubtedly one of the greatest motorsport events in the world.

At nearly 50 years old it’s also one of the oldest and there are people who race here who grew up on their grandfathers stories of dust, glory and heartbreak. Some 250 teams have gathered in Ensensada with their service rigs, pre-runners ready for the 48th running.

There's nothing intrinsically too tough about any particular section of the course (although I say that coming from a background of winch-challenges and now ULTRA4) but it goes on relentlessly, jump after ditch after washout after silt bed for over 800 miles! And that's before you include all the booby-traps the kindly locals have dug into the track.

It starts in the bright midday desert sun but goes deep into the twilight... then all through the night and the top guys in their million-dollar Trophy Trucks and unlimited Class 1s will finish somewhere towards the next evening. All of the 31 classes have 33 hours to finish.

I’ve been press a couple of times, in 2011 with the Desert Assassins and last year riding with Rob MacCahren as he cruised down to La Paz to take a popular victory, but for 2015 I won’t be just standing by the track, camera in hand; I have the amazing opportunity to actually race!

Behind all the purpose built desert racers and bewildering assortment of cool race cars are the Class 11 Bugs, standard pre 1973 VWs that clatter and bang their way around the course behind everyone else. A long way behind everyone else! These were the cars that were in the very first races in the late 60s… and the ones that made people think they needed to build something else that would actually make it through the course. Desert Dingos are the team I am co-driving for. Sponsored by Mad Media, a company I work for, the 1107 car is stripped out, has a safety cage and a set of amazing lights, but all similarities to a race car end there. It has a 1.6l air-cooled engine that puts out a scant 75bhp, standard 4-speed gearbox, suspension that would make a go-cart feel like a Jeep and enough love and guts put into it that nothing is impossible.

It started off matt black but after a trip to a local orphanage last night it’s now covered in dozens of tiny handprints and as JT Taylor (thanks for the racesuit!) pointed out, the poked, the golf ball surface might give us an aerodynamic advantage at speed compared to our pristine-bodied rivals. It’s not an intentional modification though, it’s just because the car has been rolled and crashed so many times.

For the Class 11s the race is not about speed and handling though, it’s getting to the finish… and that’s a long, long way. We’ve just got through contingency (scrutineering in the Queen’s English (Don’t ask me about blowing trannys)) and went through so quickly that we left Robby Gordon in his Speed Energy truck standing. We’re not too confident of repeating that feat again tomorrow… but if we see the finish line the day after that we’ll be some happy Dingos!

Follow us (HERE) where we’ll be uploading updates as and when we can.

And I’ll have the full report of what we managed to get up to in a few days.