Here's Robb Pritchard with a recap of the second day of Ultra4 action in Italy.

It was a quite tense atmosphere at the start as everyone knew that Roberto Ciani would be going all-for-nothing to catch Levi Shirley today… and that’s exactly what he did. Levi wasn’t going to be easy to catch though, and from where I was standing, watching him come down the other side of the valley, he absolutely blitzed the course, airborne and sideways, the thunderous V8 echoing through the valley.

The cars start at 2 minute intervals so when the locals looked at their watches and there was still no sign of Ciani I heard dismay in their voices…. When I spoke to the team a couple of days ago they were so proud that their buggy only weighs 1680kg… but if it weighed 1700kg and had an extra tyre on perhaps they wouldn’t have lost so much time. A puncture near the start meant that they had to do ¾ of the lap on a flat. ‘Doing a Tom Wayes’ as Thom Kingston remarked, and if you saw the live feed from King of the Hammers you’ll know what that means. There wasn’t much of the wheel left when he got back to the pits… just like his chances for a win. 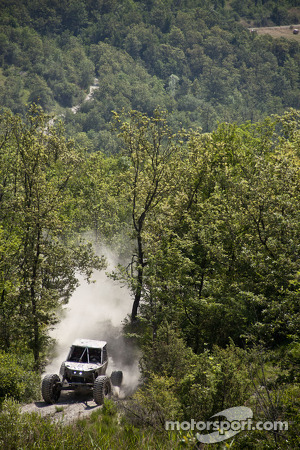 King of the Mountains action

Ferdinando Bartolucci, who I have to say a massive thank you for the party he put on last night, was through next in his deceptively standard looking Land Rover Defender but it seemed that Rob Butler’s chances of a podium were already over. Stephane Zosso came by and then Nicolas Montador in his WSR buggy… “We used the fiddle brake to turn into a corner and it just ripped the calliper off. So, wheel off, pipe crimped and we cracked on,” explained co-driver Andy Marshall. “But that was half an hour gone.”

Both Jaap Betsema and Axel Burmann managed to fix their cars last night and started again. Jaap’s team worked on the brake system until 3am and then another couple of hours before the start, but got about 10km before they failed again and Axel, after rebuilding his transfer box got about 2km before the rest of the gears decided that they wanted to commit hari-kiri.

Then, after just a short 1 hour break this time, it was into the final lap. It seemed that Levi wanted to give the charging Ciani another chance by almost rolling in front of me and then taking a corner far too tightly, almost slipping down the inside bank. I can imagine what his co-driving dad Brian was saying at that moment, but I certainly can’t write it here! 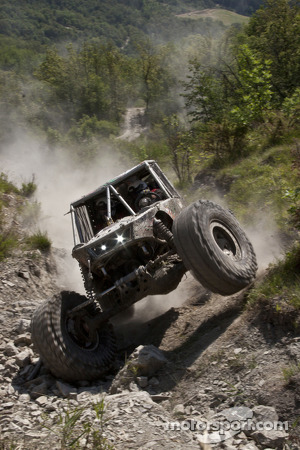 King of the Mountains action

Ciani literally flew up the rock crawl section I was at but surely there was no way he could pull 15 minutes back? Only if Levi lost his nerve or had some kind of car trouble.

Rob Butler probably wasn’t too optimistic about his chances of getting on the podium but two teams in front were most obliging. Montador forgot about the big hole that Betsema had a moment in yesterday and rolled into it, getting stuck for 30 minutes and Bartolucci had a steering pipe explode and lost a lot of time running back to the pits for a spare.

At the front though Levi managed to keep control and took a very popular win, his first in ULTRA4, with Ciani, in a new and untested car, a very creditable 2nd. Making it two Euro Fighters on the podium and marking a huge turn around for the team after their struggles in Scotland, was Rob Butler.

After blowing two tyres yesterday Stephane Zosso had to put ones with a different tread on the front which made the handing less than ideal so they were happy with 4th. Sneaking into 5th thanks to Montador’s issues is Walter Philippo and 6th, and now leading the ULTRA4 Europe championship, is Montador.

Words of thanks and respect were spoken on the stage before the champagne spraying ritual and then it was time to relax… and you know how Italians do that!!

Robby Gordon fastest in Formula Off-Road; Paul Tracy back behind the wheel